I am over-the-moon excited about my new Cyborg series with Changeling Press. Terras Five is a planet colonized by humans who became cyborg in order to survive the harsh environment they found themselves in. The children are born human, receiving cyborg implants during their childhood. The planet now has a stable population, but the lifestyle they have developed is considered strange by the humans that inhabit the other planets in that solar system.  So far I have two stories in the series, with a third releasing next month. The romances are all about the interactions of human and cyborg and how they come to realize their differences are not as important as what they feel for each other. Of course, there’s lots of action along the way!  The books in the series are Her Cyborg Lover, Taming the Cyborg, and A Deliciously Bothersome Cyborg.

Here’s the blurb and excerpt for the first book, Her Cyborg Lover 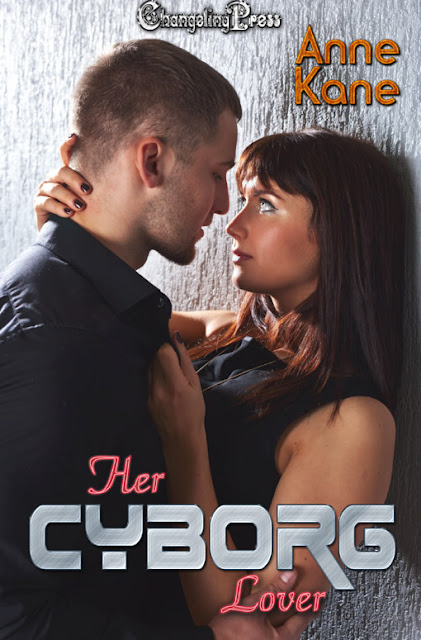 Natalie’s loved and lost and she’s not so sure she wants to risk her heart again. She’s willing to settle for a challenging career as a space-pilot instructor and a succession of no-strings attached lovers. But that’s before her boss saddles her with the last thing she wants—a new partner.
Jebediah recognizes his perfect match in Natalie from the moment she seduces him on a dare. Everything that makes her a top-notch pilot, from her fearlessness to her passion, makes a night in her bed both challenging and unforgettable.
A dangerous confrontation with a brutal enemy, an exploding drive engine and a traitor close to home throws everything into perspective. Natalie is going to have to put the past behind her and risk it all, because when your partner is also your lover, failure is not an option.

“Delta Class Scout ship. I order you to identify yourself, or be prepared to handle the consequences.”

A deep male chuckle rolled through the comm link. Natalie blinked. Laughter? Was the idiot actually laughing at her? He was so going to eat her dust, and that would be before she grounded his sorry ass for the next decade or two.

Thirty years of practice gave her the edge every single time one of the cadets pulled a stupid stunt like this. Engaging the infrared overlay on the cerebral interface, she mentally plotted the other ship’s most likely course. Only an experienced space jockey understood that the shortest route was rarely the quickest, or the easiest.

Sure enough, the idiot darted between the two large asteroids directly in front of him. A seasoned pilot would know that the combined gravitational fields of the rocks created a braking effect on any smaller object caught between the two of them. Real-life one on one versus theory in the classroom. She could almost feel sorry for the pilot as he struggled to wrest control of his ship from the two inanimate objects.

Almost, but not quite.

She circled around the trap, putting herself directly between the rocket jockey and home base. Let him watch her tail for a while before she slapped him into the brig. Waggling her wings in an insulting salute that the unfortunate pilot couldn’t possibly miss, she veered toward home base.

She hadn’t quite finished congratulating herself on such a swift victory when her ship careened sideways, almost colliding with one of the smaller asteroids in the field. What the hell?

She jerked her head up, hardly able to believe the display in front of her eyes. The smaller ship had freed itself of the gravity well and moved to parallel her before turning so that his thrusters aimed directly at her side. When he fired them, the shock hit the pilot ship with all the force of a herd of thundering moon-cats.

Crap! This kid had balls. Balls and the makings of a star-class fighter pilot—if she didn’t kill him first.

Getting the ship back under control, she reined in her temper and concentrated on chasing the smaller ship. It had been a long time since anyone had actually given her a run for her money. She wasn’t sure she liked it. “Pilot, you just bought yourself a serious amount of time dirt-side. Again, I say, identify yourself.”

“Who the hell are you?” Her voice harsh with suppressed rage, she gave the pilot one last chance to reply.

“Obviously a better pilot than you.” His voice was smooth and low, with a trace of male humor showing through. Arrogant, definitely arrogant.

She felt a grudging respect for his lack of deference. He had her on the run and he knew it.
“I doubt that. I got careless and you got lucky.”

A disbelieving snort echoed through the com link. “I’m an excellent pilot. I don’t need luck.”

“And your name?” She didn’t recall the last time she’d spent this much time trying to extract information from a cadet. Who the hell was this guy? A few seconds passed, and Natalie realized the cadet was going to ignore her yet again.

Turning the mode to private, she called up the avatar. “Can you get anything on that ship? A registration number? Something to trace the pilot?”

“Negative.” If an avatar could shake its head, she was sure it would be. “There seems to be some type of blocking involved.”

Natalie’s eyebrows rose in surprise. Blocking identification protocols was strictly forbidden, and would require way more tech savvy than most of the cadets were capable of. “Can you identify the blocking procedures?”

Maybe she could get the man’s identity in a round-about way. She snorted ruefully. When had she started thinking of the pilot as a man, not a boy? When he’d outmaneuvered her back there, or when he’d had the backbone to not answer her demands, not give her his name?

With that attitude, he’d go far in the military. Again, if she didn’t kill him first.

Who the hell was he?
Available February 17th
BUY IT HERE

ABOUT THE AUTHOR
Anne Kane lives in the beautiful Okanagan Valley with a bouncy little rescue dog who’s breed defies description, a cantankerous Himalayan cat, and too many fish to count. She spent many years trying to fit in and act normal, but finally gave up the effort. She started writing romance in 2008, and her fate was sealed when she won a publishing contract with Red Sage Publishing and just a month later Changeling Press accepted her first submission. Since then she had published more than thirty stories in a variety of sub-genres, all with a happily ever after.

Her hobbies, when she’s not playing with the characters in her head, include kayaking, hiking, swimming, playing guitar, singing and of course, reading.