For the Greater Good by Greta Van Der Rol That's her in the picture. You might think she's a very beautiful oriental black cat, but she's not – well – not in the Dryden Universe, anyway. In my latest story set in a slice of our own galaxy, that's an auralfang who has been dubbed Puss by her doting Human, Tian Axmar.
Auralfangs are, as you've probably guessed, a species of feline. Many feline breeds are scattered around the various worlds of the Empire, some simple companions, others – not. The auralfang developed in the jungle reaches of the obscure planet Diddimus Four, but they are now extinct in the wild. They are highly prized by exotic animal collectors, but it takes an expert to pick them from more common species. Although they are all basically black, they have a small white patch on their chests which is as unique to an individual as a Human fingerprint, and their tails are prehensile. They communicate with each other, and Humans, by broadcasting colors and impressions that another mind can perceive.
Although Puss is a very smart feline, she also has those traits that drive cat owners crazy – and very much a mind of her own. Like in this little scene, where Tian is trying to figure out a way of getting into a gated community.
*******

Excerpt
Tian opened her coat so the cat could jump down to the ground, where she stretched, then trotted over to the gate and slipped easily between the bars.
Shit. "Puss, don't."
The cat presented Tian with a view of her retreating backside.
Oh great. What now? Tian grabbed the bars at the gate like a prisoner wanting to escape. "Puss. Come back here! Right now!"
She was about to press the call button at the gate when a head rose from among a row of vegetables. The dratted cat sauntered toward the figure, her tail waving. The woman stood, dusting dirt from her hands. She glanced at Tian, then, her smile softening her face, she beamed at Puss. "Hello. Aren't you a pretty cat?" She bent to pat the sleek head presented to her, thought better of it, and wiped her hand on her pants first.
Puss preened. Shit shit shit. Maybe she'd decided she didn't want to be a space cat. The flash of red came back instantly. Well, that's telling me. How did she know I thought that? Telepathic cat.
The woman had straightened. "Is she yours? She's beautiful."
"Yes, she is. And she's very naughty. I'm so sorry. She just slipped away." And she's very smart and this is exactly what she intended.
**********
Puss becomes an important member of the team as Tian and her partner, Brent Walker, investigate the massacre in which Puss's Human was killed.
Although For the Greater Good is a sequel to Eye of the Mother, in which Tian Axmar and Brent Walker become a team, it is a stand-alone story.
You'll find it at major ebook vendors. 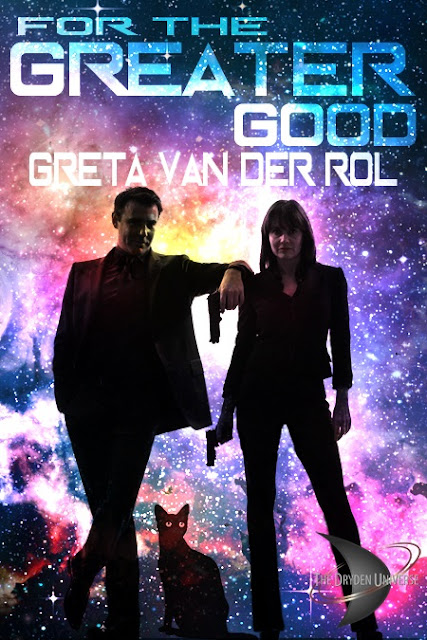 A Human settlement is destroyed and all signs point to an Yrmak raid as Imperial agents Tian Axmar and Brent Walker scour the site for clues. One thing they never expected to find was a survivor, a rare alien feline with unusual talents.
As tensions between Humans and Irmak ratchet to the point of no return, Tian and Brent must bring all their cyborg skills to bear as they follow a dangerous trail of deception and misdirection.
The feline, now dubbed Puss and strongly bonded to Tian, holds the key to many of the questions driving the investigation. Unfortunately, that bond drives a wedge between Brent and Tian’s working relationship, leaving Brent with second thoughts about his decision to become a cyborg.
As the evidence unfolds, it becomes clear that a devious plot to incite an interspecies war will strike at the very heart of the Empire. With lives at risk, there's no time to waste. Racing against the clock, Brent, Tian, and Puss must stop the planned carnage, and this time for Brent and Tian… it’s personal.

Review of For the Greater Good
by
Greta van der Rol

This was a fabulous, well-constructed story with rich complexities. There are many emotional and relationship issues that need to be addressed.

There are humans, who for personal reasons, have set upon a course of killing humans via deadly, ‘tweeked’ beast of other worlds, all for the greater good, of course.

And, of course, there is a simmering love story between Brent and Tian throughout the story. Brent actually gets jealous of the ‘not a cat’ cat who is far beyond earth cats.

I quickly grew to love this cat, and I was very happy her time in the book was far more than a cameo appearance.

I won’t give away the story line, but for me, the story just kept getting better with each chapter.

Until, the very end. I got my HEA between Brent, Tian, and Puss, but my HEA gets a bit dinged by what happens at the very very end.  I cannot fault the turn of events, but now I’m going to fret until the next book is available.

I give this 5 stars 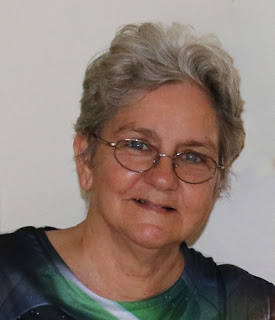 Greta van der Rol loves writing action-packed adventures with a side salad of romance. Most of her work is space opera, but she has written paranormal and historical fiction.
She lives not far from the coast in Queensland, Australia and enjoys photography and cooking when she isn't bent over a hot computer. She has a degree in history and a background in building information systems, both of which go a long way toward helping her in her writing endeavours.
Find Greta at Website Twitter Facebook