Bringing the Sons of Tallav to the Cosmic Cabaret

My mind spun in all kinds of directions when I first heard that the SFR Shooting Stars were looking for authors to participate in the Cosmic Cabaret anthology. We were asked to bring our own universe into that of the L.S. Quantum.

Who from my Sons of Tallav Universe needed a vacation? In the end, I chose Master Trey, but his visit to the Blue Star line’s luxury starship isn’t a holiday. He’s been sent on a mission. I’ll get to that in a moment. 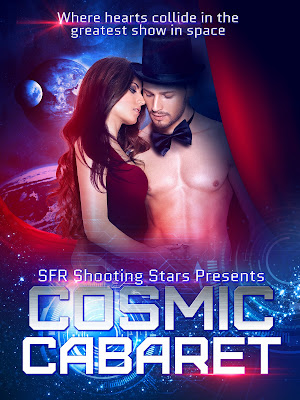 The Cosmic Cabaret is just one of the venues on the Quantum, which is the size of a small moon. Lots of space for the thirteen authors in the anthology to add to the world building already provided by the set creator, Jayne Fury. But all stories intersect in some way at the Cosmic Cabaret. Our world building was cross-pollinated through a discussion forum where we shared with one another the details about the Quantum and other venues we were creating in our stories. This was the best part of this anthology experience. I loved hearing what others were doing and seeing how they brought their characters into the setting.

The anthology is in the final prep for release on October 10.

Cosmic Cabaret:
Where Hearts Collide in the Greatest Show in Space

Come aboard Blue Star line’s crown jewel, the LS Quantum, a luxury starship traveling through space and time. You’ll meet princes and star sultans, solve a murder, track a thief, plan the ultimate jewel heist, and encounter futuristic rock stars on the lam, cirque stars who want the quiet life, and dancers who want fame. Join thirteen USA Today, Amazon best-selling, and award-winning speculative fiction romance authors as they twist their own tales on the decks and in the dance halls of LS Quantum. Embark on a journey to fall in love at the Cosmic Cabaret. 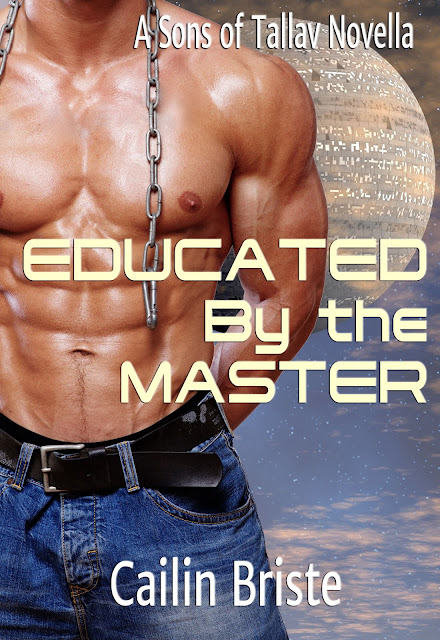 Take one talkative novice to kink. Combine with a master who prefers the silence of meditation. Bake on high heat at the Cosmic Cabaret. Luscious.

Patsy O’Shaughnessy is ready to leave the Quantum and Cosmic Cabaret behind for a new position at a kinky venue on the planet Beta Tau. That she’s a novice to this type of club doesn’t curb her enthusiasm. She needs this job. Trey Johannsen isn’t thrilled to be pulled from his club on Beta Tau to offer her his expertise. Seriously? Burlesque? Yet, the creative director they’ve foisted on him is an intriguing ingénue that reignites a light within, clearing the cobwebs of his ennui. They’re both going to have to learn some new tricks… and hands-on experience is the best teacher.

Excerpt:
When Patsy first meets Master Trey, she’s amazed. He’s as much of a Luddite as you can be in the distant future. But that’s not all she finds remarkable about Master Trey.

A quick glance over her shoulder assured her every inch of the giant with piercing deep brown eyes was following her to the shuttle gate. Oh my gosh, he’s checking out my ass. Her cheeks heated. Why oh why did she have to have pale skin that showed even the slightest blush? Why couldn’t she have been born with dark amber skin like the delectable man behind her? Pull it together, girl. It’s a guy thing. Their eyes are naturally drawn to tits and ass.

An announcement stated boarding for their shuttle flight would commence in five minutes. Inside the gate seating area, Patsy turned to face Trey. “We have a few more minutes. Shall we sit, and ya can double-check that your bags have been loaded.”

Trey pulled a hand-comm from his pants pocket, held it to his ear, and made the call to the automated baggage handling system. After assuring the comm was off, he put it away.

“Ya use a hand-comm? Ya don’t see many people that do. I’d probably lose one, so my internal comm is a true blessin’. I don’t know how people lived in the past without an EBC. All my data is there at the tip of my thoughts. I was told everyone received nanite injections to build their internal server when they were infants.”

“I’m not a fan of tech. I like to keep things simple.”

Trey Johansson was even more intriguing than she’d imagined. “So, ya don’t have an EBC. Where do ya store information? How do ya know when someone is tryin’ to contact ya? Goodness. How do ya exist without bein’ able to connect with governmental systems? Bankin’ systems? Will there be a problem boardin’?” Why hadn’t he or Mr. Meryon told her this?

“Stop.” Trey narrowed his eyes and raised his hand. “Stop. Let me answer one question at a time.” In the pause that followed, Trey raised an eyebrow.

Oh, he wants me to acknowledge him. “Yes. Understood.”

A flush of pleasure went through her when he smiled. “Good girl. I have an EBC. Every child on Tallav receives one. I use it when necessary. My work-related data is kept on servers like most of yours is. You access it through your EBC. I use a vidscreen.” He patted his pocket. “My hand-comm signals me when I have a message. It tracks callers, just like your internal comm. I don’t like cluttering my mind. It destroys inner peace.” 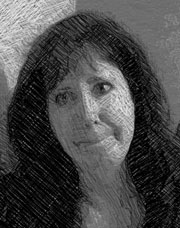 Cailin has been writing fiction for six years and non-fiction for two decades. Her non-fiction work has been published in magazines and in a non-fiction anthology. She’s a member of Romance Writers of America, the RWA Fantasy, Futuristic and Paranormal Chapter, and the RWA Passionate Ink Chapter.