Thanks Liza for the opportunity to share my new release.
Liza responds: The pleasure is all mine! Now let's get to this fabulous new story!

I have somewhat eclectic tastes in the books I read. A few months back, I started reading cyborg romances of several different authors, and I was hooked. Then my publisher asked me if I could write a mail order bride alien romance. But I was gearing up to write my first steamy cyborg romance, and my heart was set on it.

Since I had already laid the groundwork for interstellar matchmaking in the Narovian Mates Series, I decided to use that universe to start this new series. The Narovian Mates series began in a hypothetically contemporary world where Earth has just joined the United Galactic Alliance of Worlds. With the change in status from a protected world to a member world, it gave the Narovian Matchmaking Service the opportunity to publicly open for business on Earth.

With my heart set on writing a steamy cyborg story and my publisher’s encouragement to write an alien mail-order-bride story, I decided to do both in the same book. 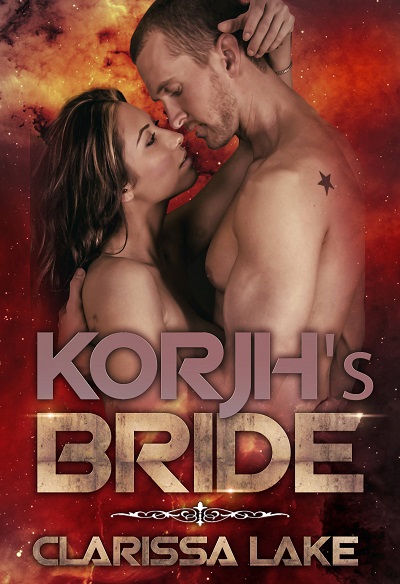 Korjh Benjegt was not always a cyborg. He was a Narovian natural human living in a backwater farming colony that was attacked by aliens who killed his family when he was just fifteen landing him in an orphanage. As soon as he was old enough, he joined the Alliance Defense Force to fight the Drayids alongside cyborgs who were created to augment the volunteer military force. After suffering catastrophic injuries in battle, Korjh was converted to a cyborg to save his life.
He was completely reborn. The difference between Korjh and the test tube cyborgs was that he remembered growing up in a family:

Zara Maples wants to escape her lackluster life and find her soulmate, so she applies to the interstellar Narovian Matchmaking Service which finds people’s soulmates based on genetics. Korjh, a Narovian cyborg, retired from battle, once a full human, longs a family of his own like the one he lost as a boy in an alien invasion.

Retired to a backwater colony of Modonne where he can’t get a date because he is a cyborg, he applies to the Matchmaking service to find his genetic complement, his soulmate, because unlike Narovian felines he cannot recognize his fated mate. After two years they find him a mate on that “dirt” planet recently accepted into the Alliance.

Cyborgs are dangerous, aren’t they? Only an ignorant human from a planet called Earth (translated as dirt) would come across two sectors to Modonne to mate with a cyborg. But to her, he seems warm and caring and so attractive as they correspond. Of course, it can’t be quite that easy. While Korjh can be sweet and considerate, he can also be scary and aggressive.

Was he the man of her dreams or nightmares?

Korjh commed about a half hour after first meal and had her blushing with his first words,
“Hello, my beautiful wife,” he began with a smile. “I can hardly wait to hold you in my arms and claim you in every way a man claims a woman.”

“Korjh,” she protested weakly. “I am looking forward to our first kiss, and to feel your arms around me.”

“You are just so beautiful and sexy,” he said with a heart-melting grin.

“I could say the same of you,” she said with a soft laugh.
“And you have a wonderful laugh,” he added. “This is so much better than one-sided conversations.”

“Have people said things to you about me?” His expression grew serious.

“They think I don’t know what I’m getting into---I don’t understand why. Being a cyborg doesn’t mean you’re not human.”

“And I have never killed a human or even a humanoid, just Drayid bugs,” he asserted. “I swear on my life, I would never harm you in any way.” The expression in his eyes softened as he looked at her.

“I believe you Korjh,” she assured him. “I have believed in you all along, or I wouldn’t be on this ship coming to your world.”

“I hope you will be happy with me, Zara, because once I hold you in my arms, I don’t think I could give you up.”

“I don’t give up that easily. Besides, the matchmaking service considers us soul mates genetically speaking,” Zara remembered. “They don’t differentiate because you are a cyborg. You passed the psych profile. Besides, every marriage takes some adjustment. I am coming to you with the belief I will fall in love with you.”

“I will do my best to make that happen. I’ve waited a long time for the service to find you because I am a cyborg and because I’ve been a warrior most of my life.”

“But you were cleared psychologically,” she reminded him. “You wouldn’t have been cleared to settle on Modonne without it.”

“That mean’s nothing to a lot of people who have never fought to survive. My cybernetics make me sub-human as far as they are concerned. The nanites have altered me genetically,” Korjh said, “and they will change you as well.”
“I know, but they’ve assured me these changes aren’t harmful. In fact, they said the nanites will keep me healthy and make me heal faster,” Zara said. “I’m ready to get some of those little buggers.” She smiled at him.

“That’s my girl,” Korjh chuckled. “They will also slow the aging process and ensure that we can make babies together.”
Korjh went on to talk about his day and show pictures of his horses and his farm and a beautiful sunrise. He had already given her a video tour of his home which had been excavated from the rock four feet under the topsoil. Most of the house was comprised of modules transported out into the desert.  There were also more rustic rooms with rock walls of granite smoothed and polished.

It all made Zara long to be there with him. When they finished their com-chat, she went back and played back the recording. His words and the look in his eyes made her long to be in his arms with her body pressed against his.

She wouldn’t let anyone convince her that he was going to be anything but the love of her life. She believed in Korjh. It didn’t matter if any of them did or not.

******
“Before I came here, I had a job and friends and time for things I like to do,” she said. “Now that I’m gone Ellie doesn’t even email me, and I haven’t seen or talked to another woman since I got here. I miss those things.”

“You knew things would be different here, that we would be isolated out here with no close neighbors. I told you this,” he said.

“I didn’t know I would feel so homesick and like I have nothing useful to do. That my friend wouldn’t keep in touch with me.”

“So, I am not enough for you,” Korjh said, frowning.

“This isn’t about you. I changed my whole life to come here and be your wife,” she said. “I didn’t realize I would feel this way. Face it, there isn’t that much to do here. You have machines doing everything. Just about all we do is eat, sleep, and have sex.”

“And that makes you unhappy?”

“No---yes. It’s like we are on a permanent vacation. I need something useful to do.”

“Sex with me makes you unhappy?”

“No, you’re not listening,” she protested.

“That’s what you said,” he reminded.

“That there is more to life than bodily functions. I need mental stimulation and a sense of accomplishment,” she said. “Like when you built this house and this farm. I need to make something of value, myself!”

“I’m not stopping you from doing that. You have your drawing screen, and you brought your sewing things,” he said.

“But it’s hard to be creative when you are hovering over me every minute,” she said. “I feel like I should hurry and finish and give you attention.”

“I don’t understand,” he admitted reluctantly.

“I know you don’t,” she said and got up from the table and went to him. “Things here are so different from Earth. If we lived there, you and I would have jobs, we wouldn’t have all this time with just each other.”

“You are not happy here,” he said and frowned.

Zara gripped his big hand in hers. “I want to be here with you. I’m just a little homesick and lonely for my friend.”

“Do you want to go back to Earth?” he asked, staring down at her.

“No,” she said after a moment. “I just need you to give me a little space.”

“You are mine, I have to take care of you---make sure you have everything you need. Isn’t that what a husband is supposed to do.”

“It is, but not every minute of every day. Don’t you have things you want to do by yourself?”

“Not when I can be with you instead,” he replied. “If there are, I can do them when you are sleeping.”

“You really don’t get it. You’re like a stalker watching every move I make.” She let go of his hand and walked a few steps away then turned back to face him.  “You’re making me crazy!”

“I will take you back to the Medical Clinic. They have gene therapy for that,” he said solemnly.

She gave an inarticulate shout of frustration. “You’re the one who needs therapy! It is perfectly normal for a woman to want a little time to herself,” she knew her voice was raised, but she didn’t understand how he could be so obtuse. “You need to find something to do on your own while I am working on my designs---a couple hours a day…”