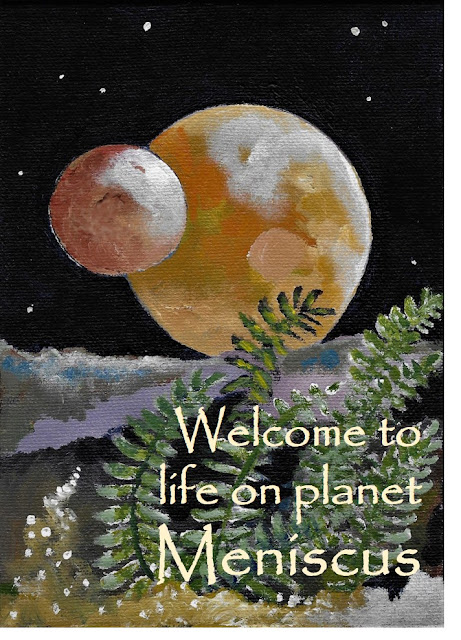 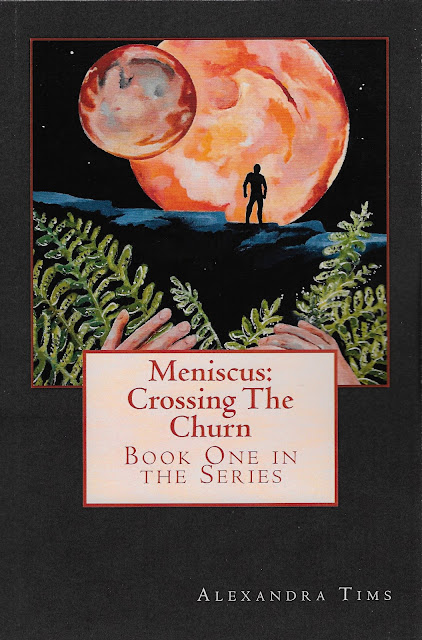 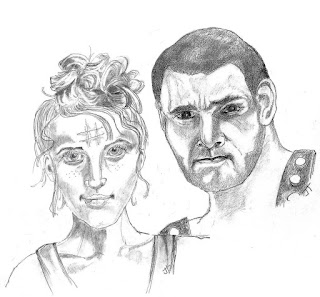 On the alien planet Meniscus, Humans are slaves. Every twilight, Odymn runs through the forests outside the city, practicing the art of parkour. Her runs give her strength, flexibility and endurance, and a way to survive a life of servitude under the oppressive Dock-winders.  When the silent Slain rescues her from a brutal encounter with a gang of Gel-heads, Odymn believes she has reached the end of her search for freedom.  In their travels through the Prell'nan District of Meniscus, she and the Slain encounter dangerous woodlands, dramatic water-climbs and an impassable water churn. Odymn and the Slain work together to evade the Gel-heads and overcome the dangers of the landscape. But is Odymn really free or is she caught in a cycle of trying to escape the inevitable?

In the first of the Meniscus series, Crossing the Churn tells the story of the meeting of a young woman and a genetically-engineered Slain whose kindness may not be consistent with his purpose.
try …. fail … repeat …
sometimes no matter how hard you run, the past grabs at your heels …

Excerpt
The sky congeals,
coughs up churning darkness,
and the air moves.

Reminder of home, on Earth.
The creaking weathervane
above the hay barn door.

The broken hills kilometres away.
Obscured by a looming sandstorm.

The Slain walks faster.
Distance widens between them.
She stumbles, falls to her knees.

His hand grips her arm, drags her to standing.
Forward in uneven strides.
Leaning into wind. 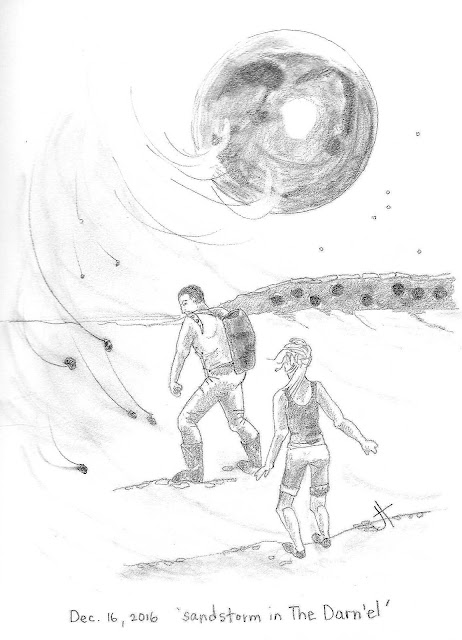 Reviews by Liza
Book 1
Meniscus
Crossing the Churn
The most unique sci-fi I’ve ever read.

This beautiful story is written as a long poem with many lovely hand drawn sketches.

The story is about a young earth woman who is living on the planet, Meniscus.  It is not a good place to live. The Dock-winders, who run the planet, are abusive sentients without morals or ethics.

The Dock-winders, who run the planet, are abusive sentients without morals or ethics. Thirty years ago, the Dock-winders invaded earth to harvest young humans as their slaves. Now she and the other humans live in squalor and are viewed as prey by the brutal Gel-heads.

To be honest, I have never read a book that uses so few words to inspire so much emotion. Having never read such a work before, I read it a second time to catch further nuances.

It’s only 139 pages long, with each page holding 100 words or less per page once the tale begins. You will be amazed at how potent her words are!

I give this 5 stars for its power, its uniqueness, the fabulous graphics, and a terrific story.
****
I also had the opportunity to receive an ARC for book two:

Review of Menicus One Point Five, Forty Missing Days by Alexandra Tims
This is the continuation of the beautiful poem that began with Menicus Crossing The Churn
As amazing as the last story was, this one is even better. Who knew that Sci-Fi could be written as poetry and the results are absolutely fabulous.

This is a continuation of the Slain and Odymn. In this poem, the young woman, Odymn, the ‘non-human’ Argenops named Wen-le-gone, and the Slain cross back over the Churn. This enables Wen-le-gone to  return to his people once he is certain the human and the Slain are well enough to travel on their own.
The Slain ceases to see Odymn as a female to be sold.
Odymn and the Slain discover they both love each other even while they fight to live in their deadly environment.
5 stars!!!
About the Author

Alexandra Tims is a botanist, writer and artist living in rural New Brunswick, Canada. Her first four books in the Meniscus series, Meniscus: Crossing The Churn, Meniscus: One Point Five – Forty Missing Days, Meniscus: South from Sintha and Meniscus: Winter by the Water-climb, were published with CreateSpace in 2017 and 2018. She has also published two books of poetry, within easy reach (2106) and in the shelter of the covered bridge (2017), under the name Jane Spavold Tims (both with Chapel Street Editions, Woodstock). In 2016 she won the Alfred G. Bailey Prize in the Writers’ Federation of New Brunswick Writing Competition for her manuscript of poems about bird calls. She is a fan of science fiction – books, television and film, including Star Trek, Stargate and Firefly. Her websites feature her drawings, paintings and poetry.
www.offplanet.blog
www.janetims.com

Other books in the Meniscus Series
~
Meniscus: One Point Five – Forty Missing Days
Meniscus: South from Sintha
Meniscus: Winter by the Water-climb