Since we will soon be leaving Earth
and heading to Titan,
I thought I'd share the long journey of how this series came to be and why it nearly stalled-out due to our lack of knowledge.
Fortunately,
Cassini and NASA brought it back to life. 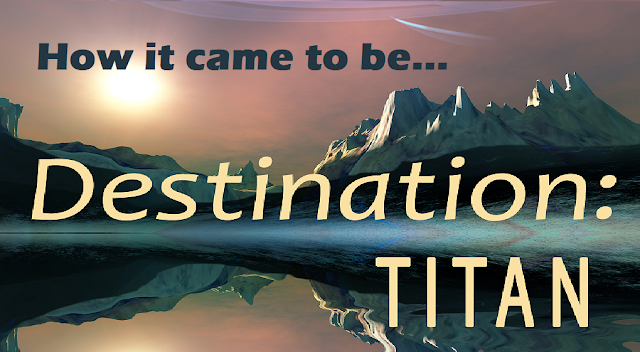 I wrote the first draft Destination over ten years ago during the best years of my life in which I did nothing but take long hikes with my dog Jess, write novels, and get feedback and suggestions from fellow writers in the yahoo group: Rom Critters. I didn't publish, nor market, nor promote. I just did the three things I loved most: write, hike, and improve.

After writing Destination: Titan, I discovered that there was insufficient information about Titan to write the second book. So I decided to wait until NASA could discover more about Titan.  If not for Cassini, this series may not have ever been published.

Cassini provided far more fodder for my Sci-Fi than I ever expected.

For example, in book two, there is now a 21.75 mile-wide, dinged up, but functional mining ship hanging out in Saturn's outer ring.

Why would I even conceive such a thing?
Simple, it's from the photos Cassini took.

The photo from Cassini shows what looks to be an oval-shaped spaceship with matching giant indentations and interesting ridges that are now marred by comet abuse. It also has pentagon-shaped fins around it. I find the fins most interesting, for unlike the center mass, which has clearly been abused and scarred, the fins appear to be smooth.

Naturally, for Arrival: Titan, I declared this a mining ship in Saturn's outer rings and thus create the crew who lives in it. The reason the ship is so large is because they are mining minerals from the outer layer of Saturns' rings.  Until they fill the massive hulls in the ship, they don't get to go home.

Over time, Pan has on occasion seemed to have disappeared, which has baffled NASA. However, this works perfectly for my story. When the ship is full, it pops back to its mother planet that requires the minerals.

Thank you, Cassini, for giving me such a fine ship and crew to add to my story.

Next, let us discuss JUPITER.

NASA now believes that Jupiter may not have a solid core at all. In truth, it baffles the scientists and remains a mystery.

So I put on my sci-fi hat and declared it a highly advanced electronic eye-in-the-sky protecting this part of the galaxy from other aliens as the giant mining ship harvest the minerals. Where on earth did I get this idea???

When we look at the south pole of Jupiter, we see pretty shots like this: 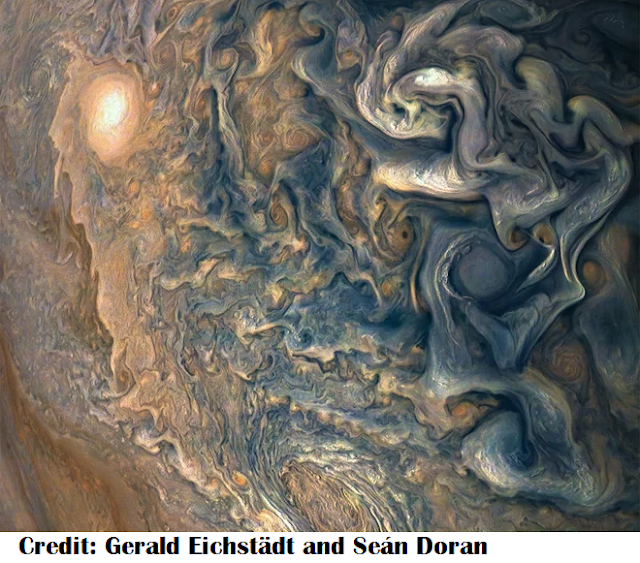 It's rather like Van Gogh is alive and painting planets.

However, when NASA uses False Color Imaging to penetrate deeper, highlighting what is below Van Gogh's beautiful painting, we discover something extraordinary. There appears to be a red-faced lizard-like creature with large eyes staring out, watching over the mining ship, Titan, and much more.

Now I'm not saying a giant redface lizard creature is inside Jupiter. That would be silly.

In my sci-fi story, the Lizard lives on the planet we call Boyjilian which transmits signals to Jupiter, allowing the lizard creature, which I named Perv, to watch over the Saturn rings, and several of the moons where sentient creatures exists.

It also explains why the Boyjilian dims all the time. The dimming is caused by the giant mining ships arriving with their loads and leaving on new mining assignments. Thus explaining why there is no consistency to the dimmings.

Can you see the red lizard with giant eyes and a light green lower jaw with short tentacles within the center below?  The creature is not actually in Jupiter. He's just a three-dimensional image being sent across space into the electrical eye-in-the-sky that we call Jupiter.  At least that is how my Sci-Fi story goes. 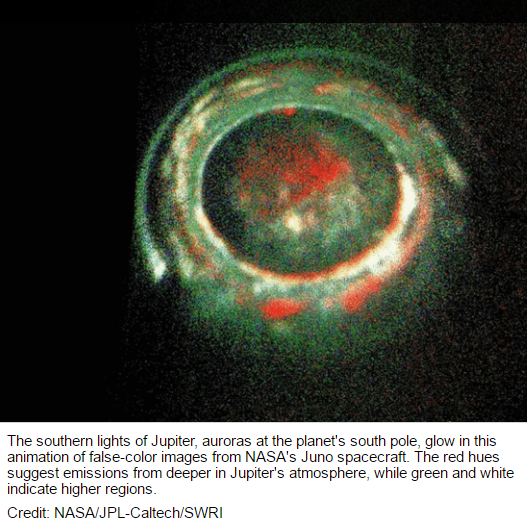 Never in my wildest dreams did I expect Cassini and NASA to provide me such extraordinary fodder for book 2.


Thank you, Cassini and NASA. You've enriched my story greatly.

One other item of interest...
If you look at the creature in False Color pic
you can see a similarity to the indentations on the spacecraft.
Two large eyes with ridges running up to the forehead. There are even the markings of whiskers at the lower part of the picture, to match those of the creature.

Thus, in my story, the Lizard creatures of Boyjilian, sculpture the face of an important person in their society onto new ships. While the lizards may or may not look the same to us, for these sentients, the various ships can be identified by a unique sculptured leader carved into the ship.
Thus, while the ship and the creature in Jupiter are not exactly the same, that is to be expected.
However, there is a strong enough resemblance for me to assume they honor their great leaders by carving them into the ship's exterior.

Perv is the current watcher of Saturn and it's moons.
The sculptured mining ship is quite ancient now and is certainly not Perv's image. However, it clearly is a sculpture of an important sentient of the same race as Perv.

Please keep in mind that I write Sci-Fi.
Thus, I am allowed to declare the ship a ship and the planet Jupiter an Electronic Eye in the Sky.
Skyping anyone?


None of these pics have been doctored.
They are what Cassini and NASA provided.