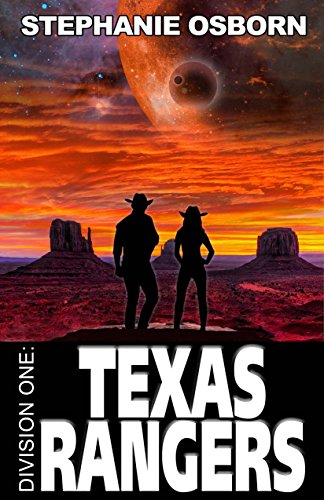 Now available: Book 6 in the Division One series, Texas Rangers! It’s time for Alpha One to take a vacation! Traveling to The Ranch, a field station in western Texas near the famed Pecos River, the pair relax and unwind, riding horseback, picnicking, and generally having fun...

...Until they discover a team of alien assassins sneaking across the landscape and headed to Dallas, to take out the President of the United States on a campaign junket!

Meanwhile, back at Headquarters and unknown to him, Echo’s estranged mother—who believed him killed years before, when he entered the Agency—lies unconscious in a regeneration pod, while the medlab staff, led by Zebra, works frantically to save her life: Shortly before their vacation, Omega discovered that Nalin Bryant had developed a particularly virulent form of cancer.

Can Alpha One infiltrate the assassin team without being killed? Can Alpha Line stop the assassination of the U.S. President? And can Zebra save Echo’s mother’s life and return her to her son, or will Echo lose one—or both—of the two women who mean the world to him?

Award-winning author Osborn is a 20+-year space program veteran, with multiple STEM degrees. She has authored, co-authored, or contributed to more than 30 books. In addition to the Division One series, she currently writes the critically-acclaimed Displaced Detective Series, described as “Sherlock Holmes meets The X-Files,” and the Gentleman Aegis Series, whose first book was a Silver Falchion winner. She “pays it forward” through numerous media including radio, podcasting and public speaking, and working with SIGMA, the science-fiction think tank.