Cosmic Wars
This is book has the most intense and dangerous missions I think I’ve ever read. Aurora Springer leaves nothing on the table in this book. It is constant trouble from beginning to end.

Nor is anything easy!  I am totally exhausted! But very very glad I read this. The detail she puts in her stories astounds me, and this one left me in near constant fear through the last half of the book.

Blurb
Join psychic superstars, Violet and Athanor Griffin, on this epic adventure, meet aliens of all stripes, and of course, the fabulous dragons of Sythos.

Violet and Athanor Griffin reunite with their baby son after escaping from the world beyond the fiery Cosmic Rift, but they find no respite from troubles. The Grand Masters have declared Athanor dead, and are competing to replace him as Chair of the Counsel.

Hordes of bloodsucking Ixioth slavers threaten galactic civilization, and a new enemy has emerged from the alternate universe, an enemy immune to psychic forces. The dynamic couple is soon swamped with pleas for help. Athanor’s vow to crush the insectoid Ixioths and expel the Nulls hits a major obstacle. The teleportal web enables their allied enemies to make rapid strikes and escape to unknown locations, somewhere in the galaxy. Violet has a different perilous challenge. Her promise to rescue the children captured on Cinerea means she must brave the dreadful Rift and lose her psychic powers. Can the Griffins reconcile their divergent promises, or must they separate for the tasks of rescuing the prisoners and defeating the slavers? 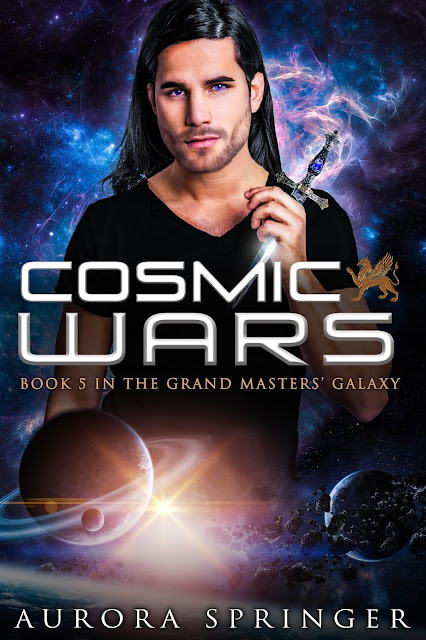 Excerpt
A column of pink mist formed in the middle of the room, and quickly resolved into the flower Grand Master, Amarylla Threeleaf. The Wistralian’s three giant petals were tightly furled in a long bud above her short stalk and the tangle of her brown rootlets.

She opened her petals, wafting the scent of roses. Their translators rendered her greeting, “Griffin Grand Masters, your brilliant presence sweetens sap of Brightness Amarylla.”

A courteous host, Athanor stood to give a formal bow and waved his hand in a cordial gesture. “Welcome to my castle, Grand Master Threeleaf. I am grateful for your generosity in guiding the Council during my absence.”

Sparking blue fire from his eyes, Athanor grunted, “Hades, I guessed as much. Tell us the bad news.”

“I might well have been killed, but Violet knew better,” he grumbled. “She perceived I was alive.”

“Tumult? As dismal as that?” He barked a scornful laugh. “Did they fight for my unenviable position?”

“Choice of new Chair debated with violent winds.” Amarylla fluttered the edges of her petals.

More amused than angry, Athanor asked, “Who is my replacement?”

Athanor scowled and his blue aura flared. “Odin’s eye, I might have guessed those two would stir up trouble.” He paced to the window, spun around and met Violet’s gaze.

Fuming with indignation, she said, “Voids, Nathan ought to be grateful for your mercy. You refused to punish him for conspiring to destroy the portal web.”

“Mercy is rarely rewarded. Nathan claimed he repented, and I deemed Morrigu was the chief instigator of their conspiracy.” Gazing at the pink petals of Amarylla, he asked, “When is their combat scheduled?”

Her petals flushed to crimson, releasing the sharp tang of lemons. “Combat is today. Brightness agreed to hold a special meeting of the full Council at twenty hours Terran standard. Griffins must attend.”

Quickly checking the relative planetary times on her com, Violet exclaimed, “Voids, the meeting’s in one hour and forty-five minutes.” She straightened and glared at her mate. “We’ll have to get dressed.”

“What’s the rush? We’ll be ready in a tenth of the time.” Athanor laughed. “By Ragnar’s fires, the fools will tremble when I appear with Violet. They cannot overcome the joint force of the two Griffins.”

The Book will be 99c until the end of July.
Buy Links:  Amazon  iBooks  Kobo  B&N