Welcome space peeps. Today I'm space-napping a very talented author to learn about one of her very fine books.

Space Rep: Why didn't you just invite her for an interview?

Liza: Because she's really busy. She might say she couldn't come for three days. So I had no choice but to remove the chance of refusal by space-napping.

Space Rep: These space-napping are going to get you in trouble.

Liza: Nonsense. Authors are too nice to press charges. They're also too busy. The closest Judicial Seat is 200 light years away. While it's possible they could find new audiences on the way to court, there is no assurance Amazon has assimilated the planet yet. So they endure the loss of three days and move on.

And here is my new author victim now. Would you like to guess who it is?

Space Rep: UMMMM  Can you give me a hint?

Space Rep:  Not a clue. Can I have another hint?

Liza: She's a stay-at-home mum of three who spent twelve years working as an Analytical Chemist in a Metals and Minerals laboratory.


Space Rep: Got it! Pippa Jay!

Pippa Jay: Liza? You need to fix the oxygen line in that helmet. I nearly suffocated!

Liza: There is no oxygen line in the helmet. Space Rep was supposed to guess faster.

Liza: When you say it like that, I feel kind of bad.

Pippa Jay: Bad enough to let me out of this riot tube?

Liza: *laughs* Not a chance. You'll smack me on my head and transport out. So let's talk about the book I stole from your desk while kidnapping you. 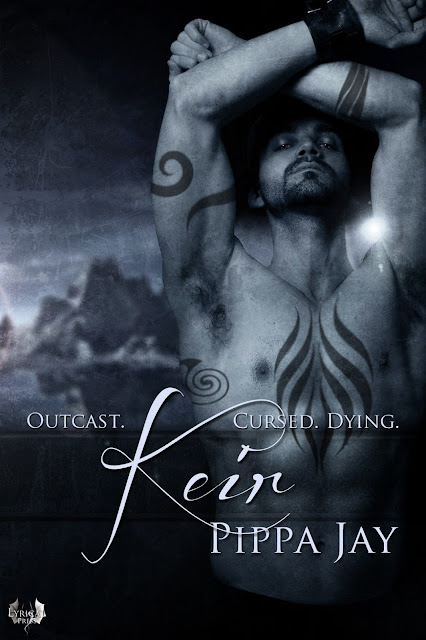 Liza: First of all, did my transporter eat your color?

Liza: Oh Good. Because that is one beautiful cover. So tell me about Keir.

Liza: Wow, it's got street cred! Now what's it about?

Liza: I don't know. I haven't read it. Why are you asking me?

Pippa Jay: For Keirlan de Corizi--the legendary ‘Blue Demon’ of Adalucien--death seems the only escape from a world where his discolored skin marks him as an oddity and condemns him to life as a pariah. But salvation comes in an unexpected guise: Tarquin Secker, a young woman who can travel the stars with a wave of her hand.

But Quin has secrets of her own. She’s spent eternity searching through space and time with a strange band of companions at her back. Defying her friends’ counsel, Quin risks her apparent immortality to save Keir. She offers him sanctuary and a new life on her home world, Lyagnius.

When Keir mistakenly unleashes his dormant alien powers and earns instant exile from Quin’s home world, will she risk everything to stand by him again?

Liza: There you go with the questions again. If I had already read your book I would have written a review rather than space-napped you.

Pippa Jay: That would have been really nice, because I've got a ton of stuff I need to do.

Liza: Not happening. I'm keeping you for three days...and if someone doesn't comment, I may keep you longer. Now from memory, tell me a part of your book...and do not ask anymore questions.

Pippa Jay: By memory? I sleep like five hours a night...I don't have a memory. Sometimes I misname my kids.

Liza: And if you want to see your misnamed kids again, you'll tell us an excerpt.

Brilliant flashes of multicolored lights burst and bloomed like flowers in the sky, drawing him onto a small balcony outside.

He stood in the shadows and watched them in fascination, the night air cool on his skin and the wind stirring his hair. His quarters overlooked the stone bowl of the plaza in which they had arrived, a deep crater in the craggy mouth of the mountain that cupped the shell-like palace. Even in the glow of the illuminated sky, he could see nothing below the crater’s rim or the landscape beyond, all of it hidden by night’s dark mantle. The stars were white pinpricks, dimmed to insignificance by the explosion of lights and veiled by a mixture of smoke and wispy clouds.

Amidst the noise and flashes, the sound of movement drew his gaze aside. Quin stepped out onto the adjoining balcony to lean nonchalantly on the ledge and admire the show. The display forgotten, Keir immersed himself deeper in the shadows and watched her instead. Quin had unbound her hair, which now formed a wild red halo around her face. The formal robes had been exchanged for a short black slip that ended mid-thigh, and a long-sleeved robe of black lace. The gentle curves of her slim figure showed through the fabric. His eyes strayed to the white skin of her legs, like fine marble shaped and smoothed. What would it feel like to touch? Cool like stone? Or warm like velvet, soft as silk?

Unease tightened his muscles, and he tried to pull his gaze away. A Salusian woman would never expose herself like that. But she does not know I am here. I should not be looking. Even as he thought it, even as he berated himself for it, his gaze drifted back. A smile arched her lips as she watched the skies, as enchanted as a child. A stronger gust of wind brushed the hair back from her face and folded the satin cloth of her outfit taut around her figure.

A sudden sense of elation overwhelmed him, combined with the heat T’rill had inspired. Desire wrapped tight arms around his body. The heady mix stole his breath. No. Shame burned his skin. Quin was his friend, the first he had ever had. The first person to show him kindness in more years than he could count. Yet at that moment he wanted more. For the first time in remembrance, he wanted to touch and be touched in return. To hold her and have her return his embrace freely, with more than a friend’s affection. To feel her white skin under his fingertips. To brush the hair from her face as the breeze did now, and run his fingers through it.

His thoughts dishonored her gift of friendship to him.

Liza: Wow, I need to buy that. It sounds really good.

Liza: So where can I buy it?

KEIR is AVAILABLE IN PRINT AND IN ALL DIGITAL FORMATS
BUY LINKS:
Lyrical Press Inc.
Amazon US
Amazon UK
Barnes & Noble
Kobo
All Romance eBooks
Bookstrand
The Book Depository
ADD IT TO YOUR GOODREADS SHELF HERE

Liza: First, you have to say something nice about my book, Worst Week Ever.

Pippa Jay: Worst Week Ever is the romance equivalent of America’s Funniest Home Videos. Read. Laugh. Cringe. And be grateful it isn’t happening to you. :P


Liza: Thank you. That sums up my book really well. In three days, I'll let you go. I want to give peeps a chance to stop by and buy your book first and read your nice comment about my book.

AND LEAVE COMMENTS. Pippa will be very bored if you don't. She'll have nothing to read, because I'm taking her book with me to read.