Death is an illusion

Death is an Illusion
Great news! Turns out dying no  longer matters. According to Quantum Physics, Death is just an illusion.

In my prior blog we discovered space was a hologram and now we learn death is an illusion.
hmmmm....

Are we characters in a giant Sims Game?  Is this the reason I feel so apart from my terrible past due to the fact that I never really experienced it first hand. Instead. it was downloaded in my brain so I have something to complain about.

(All funny people need to have a tragic past they wish to overcome.) 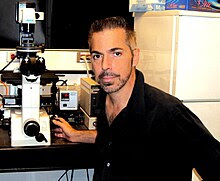 Robert Lanza, who is NOT a quantum physics scientist, rather a broad thinking medical doctor,  places biology above all other sciences as the key to Life, the Universe and  well you know...  Let's call him Dr. 42.

Barbara Walters interviewed him once.

He's also written a book on this, so clearly, he's given it some serious consideration, and oddly his major premise that time is just a way we construct our world, but it's not a lower level reality of quantum physics, I agree with.

Although I have to say when the battery in my watch died and I went a week without time on my wrist it was very difficult to know when to sleep. So even if it's not real, time is very useful on a day to day basis. (Days don't exist on the lower level of quantum physics either.)

Right off the bat, (bats don't exist on the lower level of quantum either,) he promises to provide us proof of his claim.

I have to be honest, even though I'm in agreement with most of his thoughts, I didn't find any 'proof' in his article, and honestly, he sounds wackier than me.  However, I googled him, and he's a REAL medical doctor, who has done a great deal of impressive things by pushing the envelope of what is possible.

However, his theory of everything, called biocentrism worries me. It sounds like a repeat of a very good sci-fi writer who decided to found a religion. We've too many religions already, if you ask me, which you didn't, so never mind.

Robert believes life created the universe and death is an illusion created by our consciousness. The reason we believe we die is because our bodies die...or would if time were real, which its not on lower levels of quantum physics.

Ergo, Death is an illusion. Doubly so since in a multi-verse reality, every possibility exists, which means somewhere there is a living version of you, because in that probability, the human body does not degrade over time, it continues to replicate perfect cells and thus lives forever. Poor immortal me. I think I prefer 'dying' and coming back as a new little baby to try life all over again, and maybe, just maybe get it right this time.

Optimism is embraced by the young. The old know better and prepare for the worse.

If you want to read the actual article, you'll discover it doesn't make a great deal more sense than I have.

Actual article that prompted this silliness.

I bet Quantum Physicists hate it when non QPs write articles or blogs about their area of expertise.
Posted by Liza O'Connor at 12:00 AM

Email ThisBlogThis!Share to TwitterShare to FacebookShare to Pinterest
Labels: Death is an Illusion, Liza O'Connor