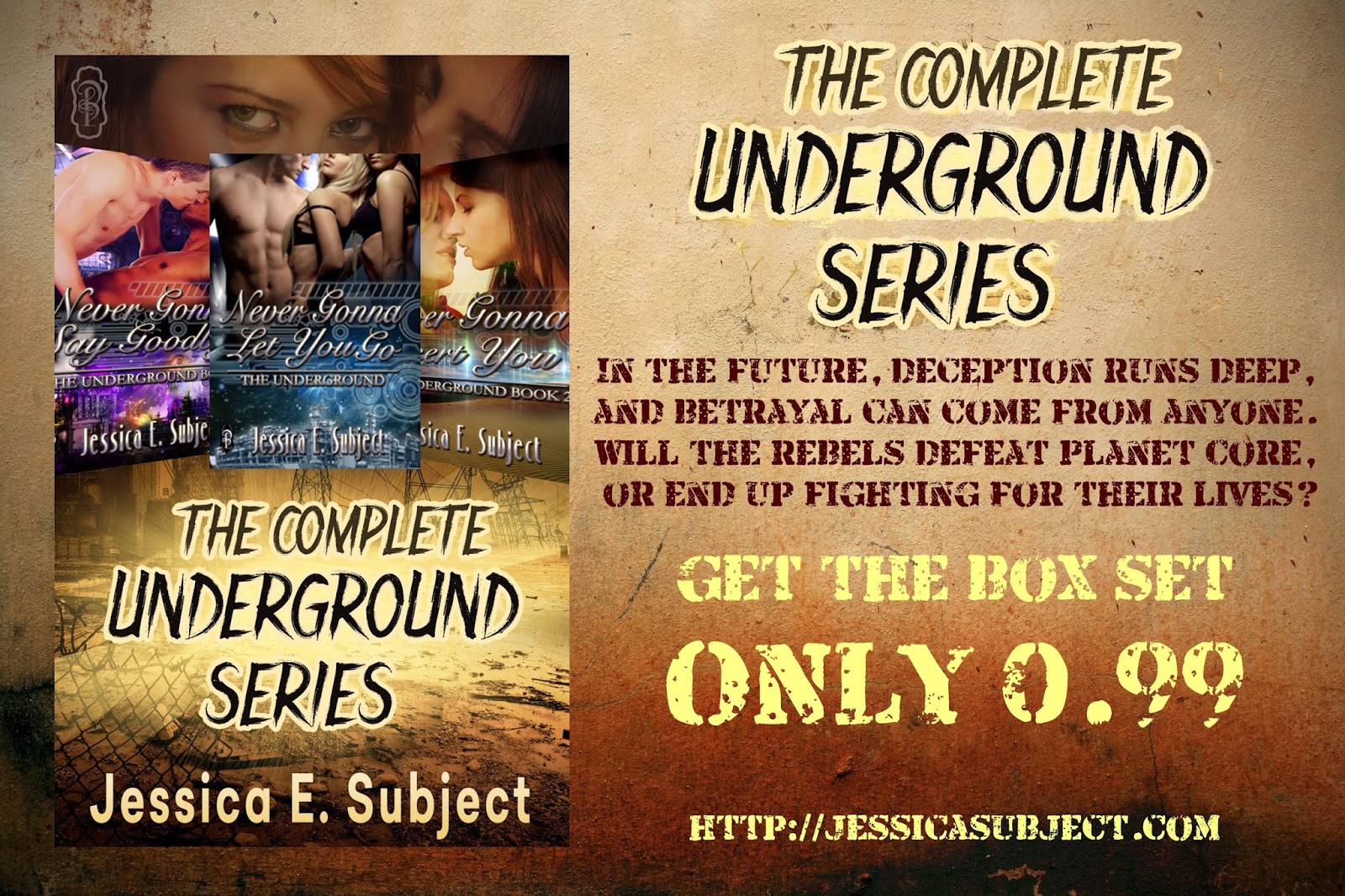 Today, I have Jessica E. Subject over with her fabulous Underground Series, which I refer to it as the Never Gonna series. Can you figure out why? But whatever you call it, it's superb!

Man, are you lucky! 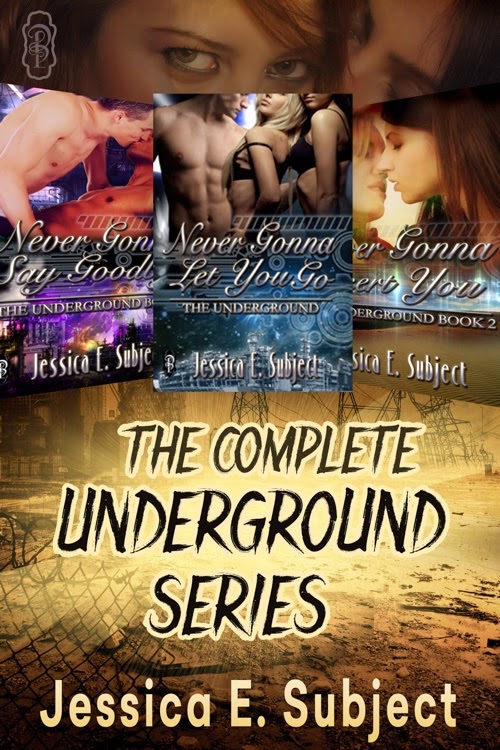 The corporation Planet Core holds all of the power. They place restrictions on the lives of those living within their boundaries, including who they can love. And there is no escape.

The rebel group, calling themselves The Underground, is disputing the corporation’s leadership. With the desire for freedom, they will fight.

And betrayal can come from anyone…

Will the rebels defeat Planet Core, or end up fighting for their lives?

The door slid open, and Brook rushed into the room she’d left less than an hour ago. After she’d been told Melina had been killed by the same creature that had attacked Calla. Now she knew the truth. Now, she had to get on the mission.

Her father glanced up, his hard brown eyes steely in their determination. “Brook, what are you doing here?”

“Daddy, I—” No, I can’t be weak anymore. I have to stand up to him. With a deep breath, she took the empty seat beside Jager, the new mission commander. “Malock, I request permission to join SFEA-4. You are short a biologist, and I am the only one left sufficiently trained for the mission.”

“Denied. Now, please leave the room. You do not have clearance to be here.”

Brook stood, flinging the chair against the wall. Wrong answer. She refused to back down from him anymore. Slamming her hands on the table, she leaned forward and glared at him. “Your last biologist was attacked by an unknown predator, the mission commander killed. You need me there to study it, find out what we’re up against.”

“The answer is still no,” he growled.

She straightened her back. “It’s because I’m your daughter, isn’t it? You’d rather keep me sheltered here while you put everyone else’s life in danger.”

Malock stared, nostrils flaring. “This has nothing to do with the fact that you’re my daughter.” He sighed and shook his head. “But if you want to go, fine. It’s your death sentence.”

He stood and nodded to Jager. “You know what to do.” He turned his attention to the rest of the table. “Your mission directives will be presented to you before departure. Please be familiar with them prior to setting up camp.”

Her father made his way around the table, stopping beside her. She tensed when he rested a hand on her shoulder.
He shook his head. “You left me with no choice.” Then he marched out of the room.

Jager took the floor, and Brook picked up her chair and returned to her seat. The new mission commander projected a holographic image of the foreign landscape across the table, but she couldn’t concentrate on his presentation. Her father’s cryptic words echoed through her mind. Your death sentence…. No choice….

Was the entire mission doomed for failure? Were they all being sent to die? Why would Planet Core do that? Airondelle was supposed to be the corporation’s future.

Brook focused on Jager, but his words went in one ear and out the other. A pit of worry grew in her stomach. Would her father really allow her to be ripped apart by a predator in the night? No, I can’t think about that. She’d demanded to go on the mission. And if Melina could survive on the planet, so could she. She just had to find her first.

Out? Time to go, already?

The rest of the crew pushed away from the conference table and trooped out the door with excited murmurs. A far cry from the turmoil rolling through her.

“Let’s go, Malock.” Jager raised his eyebrows. “Or did you change your mind?”

She stood and released a deep breath. Even with her trepidation, she refused to back out now. Melina waited for her. “No, I’m looking forward to seeing Airondelle for myself.”

Brook spun away and rushed to catch up with her comrades. If she revealed her plans, she’d be stopped before she could find her lover. She would have to hide Melina right under their noses to bring her home. She pushed her shoulders back. I can do this. I have to.

The all-terrain vehicles sat loaded with equipment for the mission in front of the swirling mass of the portal. Her father certainly wasn’t wasting any time getting a team back to Airondelle. Crewmembers already filled the first vehicle, so she hopped into the back of the second.

Jager passed around everyone’s mission directives then shoved in on her left. Thank goodness he was the last to load. With his bulk, he occupied both of the remaining seats.

Before she had time to read her personal orders, they proceeded into the portal. She passed through the spinning matter, her body pulled and stretched in every direction. Unknown forces pushed on her chest, making it difficult to breathe. She gripped the seat, hoping she wouldn’t get pulled out. But the awkwardness didn’t last long. The transporter room light years away, clean, fresh air poured into her lungs. The alien vegetation of the foreign planet lined the rough dirt road they traveled. She yearned to explore the flora and fauna on a more intimate level. And she would, after setting up camp.

She opened the folder with her mission directive inside. Instead of the stack of papers detailing what Planet Core expected of her, she found a single sheet. Her father’s handwriting scrawled across the page. You can never know the truth.

Hard, cold steel pressed against her temple. A gun. Her breath caught. What the fuck is going on? She grabbed her knapsack and launched out of the vehicle.

Jessica lives in Ontario, Canada with her husband and two energetic children. And she loves to hear from her readers. You can find her at jessicasubject.com and on twitter @jsubject.