Rachel Leigh Smith talks about her love of heros.

Today, I have Rachel Leigh Smith
and her fabulous novels,
My Name is A'yen,
The King's Mistress, &
To Save a Life.
Here's Rachel discussing her preference for the guys.


A Portrait Of Two Heroes

It’s no secret the hero is always my favorite character in a romance. If you’ve read My Name Is A’yen, you probably noticed it’s all about him. If you haven’t read it, you’ve been warned. It’s all about him.

Writing male POV comes naturally to me. Writing female POV doesn’t. Weird, huh? When I started writing My Name Is A’yen, three years ago tomorrow, I decided to throw out all the rules and boxes I’d been trying to stuff myself into, and write the story the way it wanted to be written. It was the most freeing experience of my life.

Then I did something else I’d never done. I kept the same main characters going into the second book, The King’s Mistress. A’yen still had a lot to do and go through before he could move into the role he’s destined to play. He also needed to learn how to keep his mouth shut. He has a tendency to pop off with whatever comes into his head, whether it’s appropriate or not. It gets him in a lot of trouble sometimes.

What I didn’t expect was to meet a young man named Da’Ro, who simultaneously broke my heart and stole it when he walked onto the page. Ro is A’yen’s bodyguard, and they’re telepathically linked. But I’m not going to tell you why Ro is his bodyguard. You’ll have to read the books to find out.

A’yen qualifies as a tortured hero, because of the events of his immediate backstory before My Name Is A’yen opens, and what he goes through over the course of the novel. A’yen is a slave in this novel. He lost his first love and his daughter, the limited freedom he’d had while his lover was alive, and his sense of belonging.

A tortured hero never stops fighting and he never gives up. Especially A’yen. He knows what true love is, and what true freedom is, and he won’t stop until every Lokmane alive knows it too. His past gives him the strength to fight.

Ro, on the other hand, is a broken hero. He has two people in his whole life who love him with no strings attached. He believes himself beyond saving, and that he’s not worth the effort. He even has a hard time saving himself when the situation calls for it. Ro’s past has killed his strength and left him believing he’s incapable of fighting.

He’s not your average telepath amongst his species, either. He’s more powerful, and also sees emotions as colors. He can also rewrite memories, which has been forbidden in his species for thousands of years. He was trained to do it, against his will, and hates doing it. Unfortunately, he also remembers every memory he alters and every mind he invades. But if he doesn’t do it, his brother will be killed.

The events of The King’s Mistress start the process of convincing Ro he does have value as a person, and is worth more than the sum of his illegal talents. Until he and A’yen end up back in the place Ro was born, and Ro loses the one person who’s always stood by him. The progress he’d made on learning how to be whole is all undone at that moment.

Ro and A’yen continue to share the lead time in To Save A Life, book three released on 5/4. Ro is a man obsessed—with his version of justice for what’s been done to him. He’s also in love. But he can’t have the justice he wants and his happy ending. To get his justice means he dies. And he’s okay with the it.

What does a broken hero do? He chooses the justice, because he believes he’s too broken and too far gone. Ro doesn’t believe Jasmyn when she tells him she’s not leaving him.

Since this is a romance, you know it has a happily ever after ending. But I’m not telling you how Ro and Jasmyn get it. You’ll have to read the books.

Ro traced his thumb across her bottom lip. He shouldn’t love her. After all, he had nothing to ofer her. No home, no name, no future. Even if, by some miracle, he was found innocent, he had to kill Camden. And there was no guarantee he’d survive that.

But he did love Jasmyn. With parts of him he hadn’t known existed. She was every piece of sweet and light in his world. The embodiment of hope. Permission to dream again, to imagine a world where he was truly free.

They’d spent so much time together in the last year. She’d taught him how to live, for the first time. Helped him spread his wings and fly.

He cupped her face as best he could and touched his lips to hers. Unlike every other person he’d kissed—usually against his will—she didn’t use her teeth to hold him captive or inflict pain. Sweetness and light infused him, banishing, for a moment, the memories of every bruising kiss from Camden.

In the sweetness, he tasted everything he could have been. A thousand futures he’d never have. Nights of bliss in her arms. Days spent in her sweet company. All combined to make him forget, for a moment, that he was in jail for murder.

With Jasmyn at his side, he could fly forever. Her touch, her taste, the silk of her mouth. Life in all its abundance. Everything he’d been afraid to dream.

But Jasmyn couldn’t be at his side. Not anymore. Not with this cruel twist in his life. He broke all physical contact with her and slid back out of her reach. “It’s not fair.”

She touched the fingers of her left hand to her lips, making him want another taste. “What?”
“I finally find someone who wants me, and I can’t have you.”

Her knuckles turned white from her grip on the bars separating them. “I’ve finally found someone who wants me. I won’t let anyone take you from me.” The conviction in her voice should’ve made him feel better.

“We have no control over what’s coming, Jas.”

“I don’t care. I love you, and I won’t stop fighting for the chance to have a life with you.”

He took her hands again, need for her touch soothing the bruised places in his heart. “I need you to tell Na’var something.”

He touched his forehead to hers. “I love the way that sounds. Tell him the evidence against me is an electrical current signature. I didn’t know there was such a thing. If anyone can figure out how it was faked, it’s him.”

“What about your tropes?”

She gave him an impish little smile. “I plan to come see you every day until they let you go.”
He chose to say nothing. The only reason he’d let himself go this far was because he knew it was over. They weren’t going to get a chance for him to learn how to let another person into his soul.

He watched her leave then sank onto the cot again.
Blue and orange spots flitted across his vision, on a background of white. Not a combination he was used to from A’yen. Eyes closed, he stretched through their link, looking for the reason. When he found it, he fell against the wall.

So much for being accepted some day. 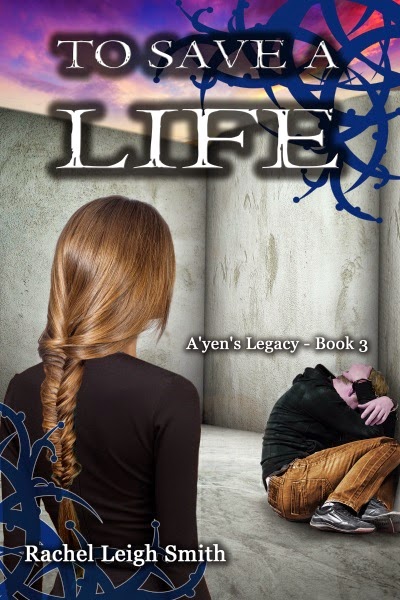 To Save A LifeA’yen’s Legacy, book 3

A’yen's loved ones are under attack. To save them, he'll risk everything.

Half the Lokmane are free and the resettling of Lok’ma is in progress. A'yen is crowned king, but it isn't stopping his enemies. Someone is after Ro, and the woman he's falling in love with is caught in the middle.

When Fae is injured in a cave-in at a dig site, A'yen knows who’s to blame. Proving it is the hard part. Things get worse when he walks into a political trap, and Ro is framed for murder. Saving his reputation is easy compared to saving Ro. Ro’s demons come for him, taking him back to a life not worth living.

A'yen races to save Ro before he can act on his deepest desire: killing his tormentor. Happily ever after can't happen if Ro is dead.

Giveaway for a signed copy of My Name Is A’yen! Ends 5/31.
a Rafflecopter giveaway

Email ThisBlogThis!Share to TwitterShare to FacebookShare to Pinterest
Labels: Heroes, My Name is A'yen, Rachel Leigh Smith, The King's Mistress, To Save a Life.