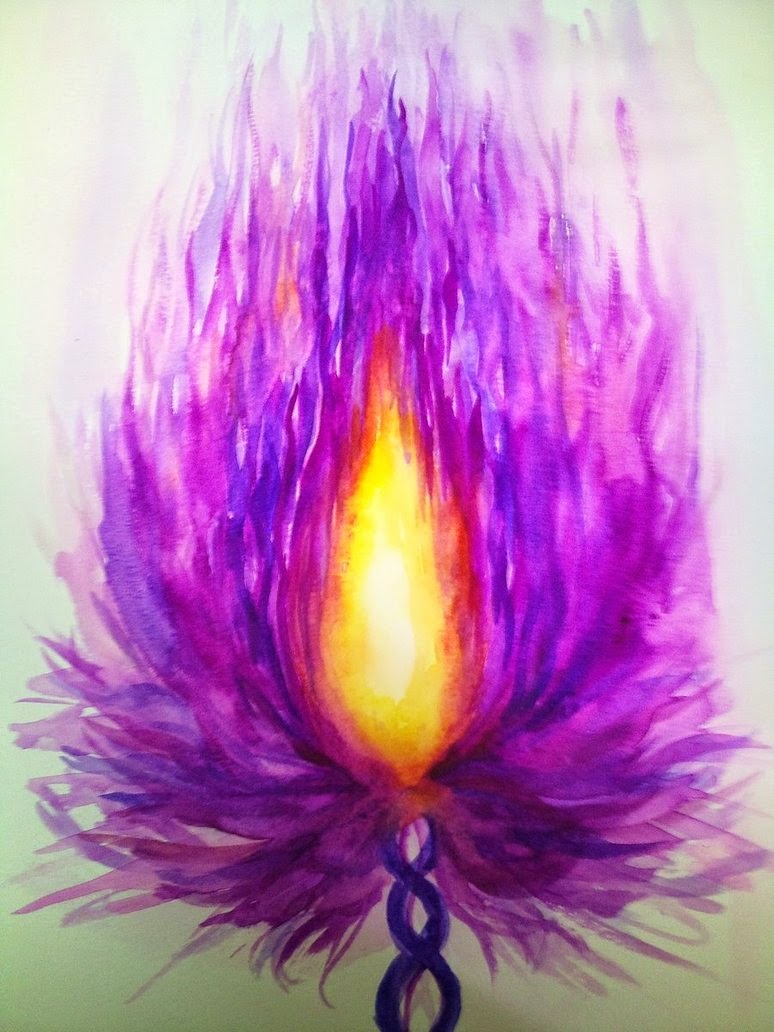 When it came down to writing for the Amethyst Chronicles, a lot of care went into the details. In the first book, I reference the other teams that took part of the Genesis Project. One day I might tell their stories. The five teams are Vinidus, Luteus, Caeruleus, Aureus, and, of course, Amethyst. I took a lot of care and research into naming the teams and their functions far behind the simple paragraph devoted to the four other teams in the first installment.

Aureus are a special team of pilots characterized by their bright yellow eyes. Aureus actually means golden. The Romans actually used aureus coins as currency, although it was very infrequently used because of its weight. One thousand years into the future, however, the Aureus team would be the one you would want in a space battle. Their leader is Lance Daniels, a former military commander with an ax to grind.

The emerald green-eyed team, Vinidus, is weapons specialists. Led by Jacob Conner, a childhood friend of Ember Wilson, they test new weapons and come up with modifications. Even though the emerald crystal is often used to aid in healing, it can also be focused to enhance mental acuity and strengthens memory. In Latin, the word is actually viridis, but I liked the spelling of vinidus better.

Mark Hopkins leads the pumpkin-eyed Luteus team of sharpshooters. Their orange eyes enhance their ability to see their targets even in the darkest and extreme circumstances.

The fourth group is the Caeruleus team. They are the teal-eyed information specialists. In Latin, caeruleus means blue. I took the liberty of making them teal since blue is a fairly common eye color.
They have a knack for getting even the most secured of secrets from systems or people without anyone knowing.

And last, but certainly not least is Amethyst. Purple is my favorite color so it was a natural choice for me. The Latin word for purple is purpureus but that just wasn't going to work.
Imagine Purpureus Chronicles. Doesn't quite roll off the tongue, does it? One of the things that drew me to amethyst was the crystals. I own several pieces of amethyst jewelry, (shocking, I know) and have been fascinated by the properties the stone is thought to process. Amethyst crystals are used to amplify various things used in Eastern healing. It is also thought that it could help quiet the mind in meditation and the Greeks believed amethyst would prevent you from being drunk.

The term violet flame caught my eye as I was doing my research. Violet flame refers to a spiritual fire, like the burning bush that spoke to Moses. It is thought that violet flame could transform negative karma and restore the flow of light to and energy to the mind, body, and soul. In this, the true powers of the Amethyst team came to be. The procedure Ember, Lewis, Nova, and Morris endured enhanced their natural abilities. Speed, strength, stamina, agility, endurance, mental acuity, and added quick healing and regeneration. The amethyst actually transformed every cell in their body to work in harmony, in unison, to better them.

That's a lot coming from a crystal or gemstone most would say was just 'pretty'.

Amethyst Chronicles: Croceus Poison launches May 22nd. And you are the first to see the cover!
What do you think? 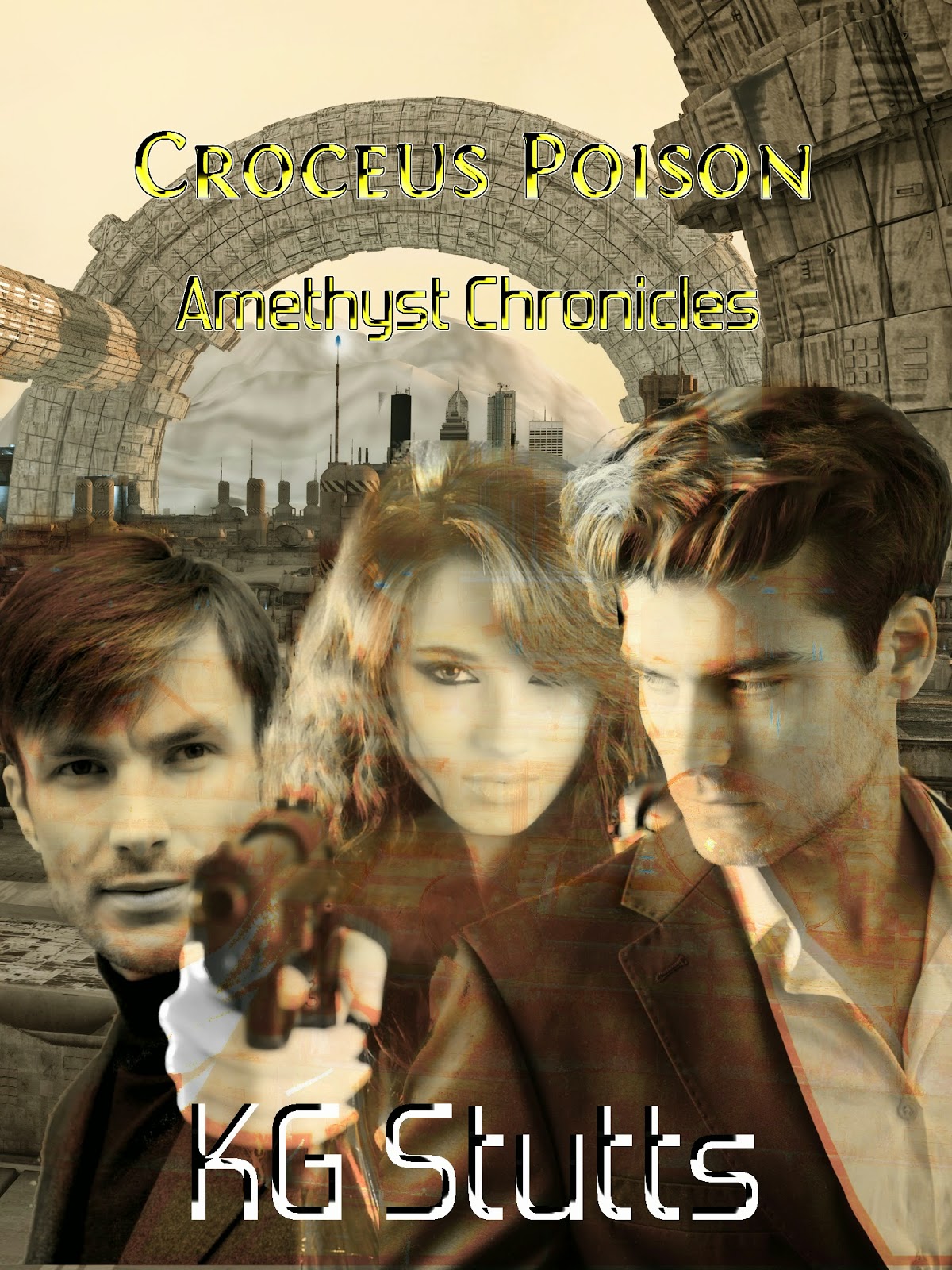 She gripped the staff with both hands, moving to strike his wrists. At the last second, she flipped it up and struck him on the side of his head. Lewis stumbled back, cursing and sputtering. She didn’t give him any time before moving in. But he was ready for her tactics. The end of his weapon hit her mouth, busting her lip open, before swinging down and hitting the back of her knees. Ember fell on the mat, the air rushing out of her body as her staff fell out of her hands and rolled away. Lewis stood over her with his staff pointed at her face.

She looked up at him, breathing heavily. Her head pounded and sweat rolled down her face. She touched her lip and frowned at the red droplets of blood on her fingertips.

She nodded. He tossed the staff aside and extended his hand, moving so she could get up. He gently touched her chin and frowned.

“I didn’t mean to bust you open.”
“It’s a tiny cut.”
“Looks pretty deep to me.”
“Only because you’re used to me healing already.”
“It’s going to take a while to get used to you not being-” He stopped, sucking in a sharp breath as she raised an eyebrow and crossed her arms over her chest.
“Me not being what? Finish your sentence.”
He rubbed the back of his neck. “I can’t.”
“Finish your sentence,” she ordered.
“Not being purple,” he said, letting out a haggard breath.

She smacked his hand away and walked toward her clothes.

“Come on, Wilson. You know I’m sorry.”
She snorted as she pulled on her pants. “Of course you are. Everyone is. The doctor is sorry he didn’t catch the croceus poison before it nearly cost me my life. The nurse is sorry she aided in the blood transfusion. My father is sorry I can’t rejoin my military commission. Commander Stewart is sorry he can’t recreate the procedure. Liam is sorry he can’t understand what I’m going through.” She spun around, fire raging in her eyes. “And I’m sorry I let myself wallow in misery. But I’m not sorry anymore. Now I’m just angry!”

She stormed out of the training room, leaving her shirt on the floor and Lewis alone with his jaw hanging open. She brushed past the people in the hallway, not caring about the gawking looks she got for walking away in her bra. 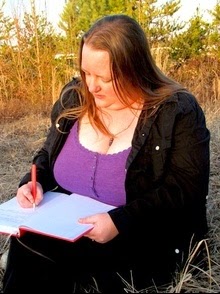 K.G. Stutts is the author of multiple sci-fi romance series as well as several romance stories. She has a degree in massage therapy. As a contributor to Independent Writers Association (IWA) her insights can be seen regularly there and on her own blog at kgstutts.blogspot.com and her website at kgstutts.com

When she's not weaving words, she enjoys reading, playing RPGs, hockey, wrestling, and football, and is a big sci-fi nerd. Currently she resides in North Carolina, USA with her husband, Brad.


http://distinguishedpress.podbean.com
Posted by Liza O'Connor at 12:00 AM