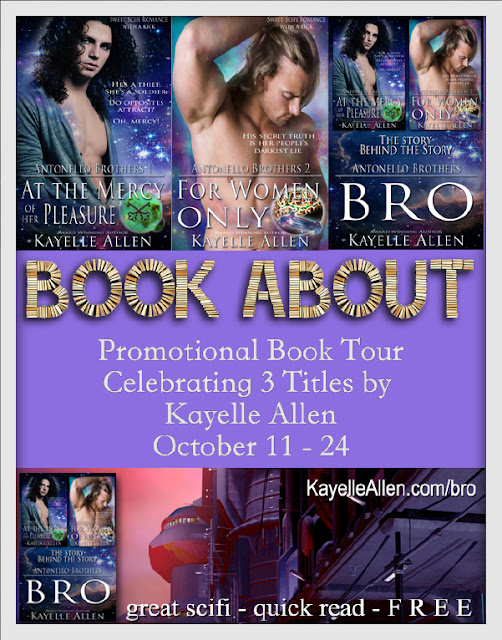 Available From: Amazon I ARe I B&N I Coffee Time Romance I CreateSpace I iTunes I Inktera I Kobo I Scribd I Smashwords

He’s a thief. She’s a soldier. Do opposites attract? Oh, mercy!
Professional thief Senth Antonello is hired to retrieve a stolen prototype for which the imperial armada has already killed twice. When Senth’s brother is kidnapped to ensure the device is surrendered, Senth must rescue his brother, outsmart the armada, and keep the item out of imperial hands. All doable, except for one small problem. Senth must accomplish it in the company of a genetically altered woman whose pheromones could enhance the mission or crumble it into dust with a single siren kiss.
Goodreads
Download the first chapter of At the Mercy of Her Pleasure

Excerpt
This scene is from the opening part of the book.

Deep in the shadows outside a ruined warehouse, Senth Antonello shoved back the hood of his sensor-blocking cloak and fanned himself. The Thieves' Guild tech let him hide from copbot scans, but it didn't cool him. Sweat beaded on his skin. Using his fangs, he unfastened first one glove, then the other, and peeled them off. He tucked them into one of dozens of hidden pockets in the cloak, and wiped his face.

The faint sound of gang chant carried in the chilled night air. Gangs in the Crooktown District hunted mixed breeds like him. At first glance, Senth appeared human, but with his catlike eyes and fangs, no one could miss his Kin nature. In moonlight, his eyes would glow.

The chant grew louder, along with the sound of breaking glass. The deeper darkness that followed meant two things: another streetlight had met its end, and that gang was closer than Senth had thought.
"You come down here, I skin you." Senth flattened himself against the brick wall. "I skin you, the Grand Master skins me. Let's do each other a favor, huh, boys?”

Worse, the Grand Master would inform Senth's Sen'dai. His guild master. The crime lord all the other crime lords feared. The Man. The Harbinger. Luc Saint-Cyr.

The Guild didn't accept non-humans, unless they were enslaved to a human member. No one could rise past level ten, unless related to a human member. Guild-arranged marriages and adoptions happened regularly. To keep the Guild happy, Saint-Cyr was Senth's lord and master and his adoptive father.

No way Senth wanted the Man angry with him. The last time, he'd almost…

Senth shook off the thought, drew his hood forward again, and edged around the corner into a darker alley. "Ffffftt!" The Kin cuss word hissed past his fangs. Where was Khyff? He had to be close. Senth had looked for hours. His HalfKin sense of smell caught a faint whiff of male, mixed with... He took another sniff. Someone--or something—else.

Pressed against the wall, Senth slipped around a corner, and hunkered down. He melted into the concealing darkness behind a barrel, and narrowed night-sensitive eyes.

His human half-brother leaned against the opposite wall of the trash-strewn alley. Khyffen Antonello's blond hair shone in the muted light. A female pinned him, arms around his neck. She tore open Khyff's shirt and ran her hands over his chest.

Senth folded himself into the tight space behind the barrel and settled in to wait. Protection of his brother went before any assignment. Family came first. At least tonight.

Senth's mother had died after birthing him. Khyff, who'd been three, had been told Senth was dead, and Khyff had been sold into slavery. Neither of them knew the other lived until a month ago. Neither had a clue about their biological fathers. Until Khyff found him, Senth's "family" consisted of the Man.

Pulling out a square of paper, Senth angled it to catch the dim light and read the words he'd copied from Saint-Cyr's note once more. You and Khyffen meet me at The Ghost. I have a job for you. Do it and I'll buy and free your brother, but it's going to cost you.

Of course it would. The Man didn't do anything for free. But if it got Khyff out of that hellhole, Senth would do it. He tucked away the note, and slipped on his gloves.

Senth's master had raised him to believe that no one should have to sell his body to survive. Saint-Cyr owned one slave, Senth, and only so he could rise within the Guild.

Senth and Saint-Cyr might not agree on much, but they both believed Khyff needed his freedom. But with Khyff's record, freeing him wouldn't be cheap, and it wouldn't be easy.

Available From: Amazon I ARe I B&N I Coffee Time Romance I CreateSpace I iTunes I Inktera I Kobo I Scribd I Smashwords

His secret truth is her people’s darkest lie.
When Kin Ambassador Mehfawni visits the capitol planet of the Tarthian Empire, she meets the human Khyff, a security expert with the company For Women Only. Fawni expects a fling, but finds love. Upon discovering her own people devastated his family, she longs to restore all he lost, but some tragedies can never be reversed. Her family demands she cast out the human, for if she keeps Khyff, she must deny her heritage and abdicate her future rule. When Fawni searches for an alternative, she stumbles upon Khyff’s darkest secret, a cover-up that if exposed, will betray her world to its enemies, and bare her family to open shame. But how can she let him suffer in the darkness that binds his heart?

Goodreads
Download the first chapter of For Women Only

Excerpt
This scene is between Khyff and his brother Senth, and Senth's fiancé NarrAy. They are discussing a Kin female. Kin are feline humanoids, and Senth is a mix of Kin and human. It begins with Senth speaking.

Khyff snorted. "Like I'd ever want a mangy Kin.”

"Mangy?" Senth's brows lowered. "Did you forget who you're talking to?”

NarrAy moved out from between them and around to the other end of the island.

"We've been over this, Sen." Khyff heard the impatient ring in his own voice and tried to curb it, without success. Fatigue clawed at his reserves of energy. "You look almost human. Why do you want to be accepted by those animals, anyway?”

"Kin aren't animals, Khyff. We've been over that, too.”

"Yes, they are." He fought the rage threatening to strangle his thoughts. "They tried to kill you the minute you were born. They didn't want you. They hated you on sight.”

"You mean you hated me, Khyff. You didn't want me." Senth stood, shoving the stool out of the way. "If it weren't for me being a half-breed, your mother might still be alive.”

"Our mother." He leaped to his feet. "She cried over you for days when the Kin stole you from her. Nothing I said or did made any difference." Khyff braced both hands on the counter. "I was a child, Sen. I couldn't help her, but I didn't know that then. I thought it was my fault. All I knew was because of you, they threw us out, and Mama wouldn't stop crying. She abandoned me because of you.”

NarrAy gasped and covered her mouth, eyes welling with tears. "Oh, Khyff. I'm so sorry you were hurt like that.”

All the strength drained out of him, taking the anger with it. He sat.

Senth slid a hand across the table and touched the tips of his fingers to Khyff's. With a male economy of words, that expressed enough. Both forgave.

NarrAy sidestepped around the counter and lifted her arms to Khyff for a hug.

He enfolded her in a warm, safe embrace, arms wrapped all the way around her tiny frame. He drew her between his knees and pressed his face against her neck.

Two years before, she'd rescued him after a savage attack that had landed him in the hospital. Since then, he'd allowed no one but her to touch him. Senth got a rare handshake.

He relished the pressure of her gentle arms around him, the rapture of her skin against his. Khyff risked chemical dependence, holding her. Even with short exposure, the touch of a Better addicted. She'd accidentally addicted him once, and he'd suffered while weaning himself. His brother could never leave this woman. Never love another. Senth was hers.

Her touch soothed, tranquilized. How anyone could expect a woman as loving as NarrAy to hide from the world? She wasn't dangerous. Already, the darkness of Khyff's soul was lifting, evaporating. Fading. How could he have forgotten how wonderful she smelled? How sweet she was? How comforting it was to be held?

"I'll get it, Khyff." NarrAy stepped back.

The absence of her touch left Khyff bereft. Dropped him back into his darkness. He turned away. Careful not to let Senth see it, Khyff clutched one hand over his heart.
……….

Bro by Kayelle Allen
The story behind The Antonello Brothers
Genre: Sci-Fi Romance - Sweet; but with a kick!

Senth and Khyff, the Antonello Brothers from At the Mercy of Her Pleasure and For Women Only, did not grow up together. They were separated at Senth’s birth. Bro shows how and why, and what event reunited them.

Funny and yet touching, Bro takes you inside the Tarthian Empire and introduces you to three of its major denizens: Senth, Khyff, and Luc Saint-Cyr. You’ll find them in many stories in the Empire.
……….
Author Bio: 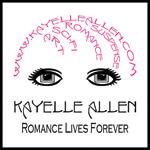 Kayelle Allen is a best selling, multipublished, EPIC Award winning Science Fiction Romance author. She is known for unstoppable heroes, uncompromising love, and unforgettable passion. In 2011, she founded The Author's Secret, an author support company specializing in eBook conversion services and graphic design. In 2006, Kayelle created Marketing for Romance Writers, a self-help mentoring group which helps members of the literary community to learn effective marketing skills by working in a co-op for promotion. She teaches workshops and is a guest on numerous online conferences. She holds an honorary lifetime membership to Outlantacon, a scifi convention for the gay geek. Her blog, Romance Lives Forever, hosts authors, models, and filmmakers, and boasts its own hashtag and daily newsletter on Twitter. 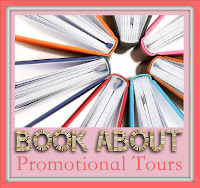 Email ThisBlogThis!Share to TwitterShare to FacebookShare to Pinterest
Labels: At the Mercy of Her Pleasure, Bro, For Women Only, Kayelle Allen, Sci-Fi Romance