Today, I have Sabine Priestley over to share
Rebellion
Book Two in
the Alien Attachments series.

“Have any interesting dreams, Red?”
“Don’t call me Red. I’m just here to find out what this means.” She lied. She knew the second she entered the room what it meant. He was the one. Her psi-mate. A cold blooded killer. 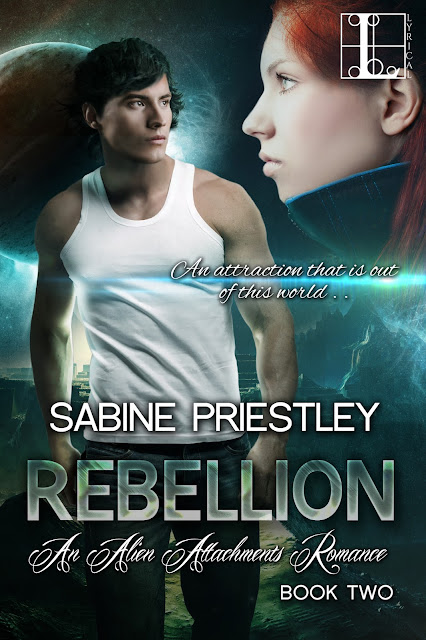 Ria Montori is no stranger to kicking ass. Though petite in size, she packs a punch as a former Sandarian military officer who currently serves the Cavacent clan on a strange planet called Earth. She has no interest in seeking her one psi-mate who could bring her unparalleled pleasure through a sensual, otherworldly bond. She has no time for a lover of any kind. So why is she lured in by the beguiling Curzan native who just killed a government official?

Ty Sordina hates Ria’s kind. The Sandarians murdered his parents while he watched and enslaved his people. Driven by revenge, he vows that nothing and no one will stand in his way. Especially not a feisty redhead who challenges his every instinct and calls to his psi like no other.

But war is coming. And the two must succumb to temptation for only the power of their completed bond can defeat and destroy the enemy. But only if they surrender…

It was she and Dani’s turn to hold their base. Ian and Armond flushed the surrounding area. Ian was ahead in kills, but so far, she and Dani were ahead on team saves. So as usual, the women were keeping them alive, and the guys were shooting things.

Ria wiped the sweat from her eyes. “We need to pick a desert next time. This humidity sucks.”

The bushes to their left rustled, and both women swung their lasers in the ready.

Ian stepped out, and Ria sparked with envy when he grabbed Dani and planted a kiss on her before he disappeared back into the foliage.

Ian’s laughter rippled through the trees.

Another rustle, and a four-legged creature with razor sharp teeth launched itself at Ria’s chest. “Morits!” Ria called out as she sliced the critter in half.

The sound of Ian and Armond battling away let her know they’d found the nasty critters as well. Six more made it past the men. Dani made easy work of the two that had targeted her. Ria nearly made it unscathed but when four hit her at once from all sides, one managed to latch onto her lower arm. Those jaws had some serious force, and her hand popped off, dropping the creature to the ground with it.

“Aw, come on. Not fair. There were four of them.” Ria lifted up her wrist and studied the bloody stump. “Halt sim.”

Ian and Armond approached from opposite ends of the clearing, equally covered in sweat.

Dani came to her side and inspected her handless arm. “It would almost be easier if they were bigger. It’s hard to keep track of them when they’re so small.”

“Perhaps your relative height to the ground also contributed to your demise,” Armond said.

Ria glared at him. “Are you seriously going there?”
“I’m simply stating that you were closer to them than Dani.”

“Whatever,” Ria said. “Little shits. Reset sim,” she called out.

Morit bodies and Ria’s hand evaporated. The illusion of a bloody stump did, as well, and her own hand reappeared as they all caught their breath. The jungle around them melted into the floor, and they soon stood in the metal gray of the sim room. 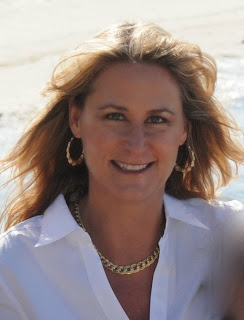 A lifelong lover of books, Sabine grew up on Science Fiction, Fantasy and Romance novels. As a child she wanted to be an astronaut and travel the stars looking for aliens. As an adult she’s seriously disappointed we’ve yet to establish so much as a moon base (although she gives a hearty nod to the ISS) and is pretty sure Humans aren’t ready to meet ET. An Electrical Engineer and Cultural Anthropologist by training, she's a geek with heart. She’s lived in more states than she cares to admit and loves to travel. When not in far off lands, you can frequently find her walking the local beaches and plotting her next adventure. Sabine lives in Florida with her husband, kids, cats and an increasingly large mess of characters in her head.