A new world is a blank page

Starting a new SFR series means building a new world. Where paranormal romance uses our world and tweaks it a little, sci-fi either leaps into the future or into the distance…sometimes both.

Having just finished the futuristic SFR series ES Siren, in Desire to Fall I wanted to do something else. And I wanted to avoid space travel all together (9 books on a ship was long enough!).

The trouble with a brand new planet is that there are so many possibilities, everything from what body structure do the aliens have to what is their level of technology? Making those decisions, for me, comes down to what story I want to tell.

The idea behind Desire to Fall was relatively simple: A society where ménages are biologically necessary and where they are the norm.

There are so many reasons why that might be needed—and I spent quite a while pondering this—but I opted for male blood being required to get the women ovulate, so the guys stick together to make sure no one accidentally gets killed. This made dating and hooking up with the opposite sex a little more dangerous, it added conflict.

I visited Hong Kong while thinking about this story (family holiday not research…however whenever I travel it is kind of research because there is always something new to learn). The tall buildings and the way there would be shops half way up were fascinating, it was very different to Perth where I live. The different levels in the buildings meshed in with another idea that I’d been thinking about: giving the women wings.

Now the world was taking shape. I had skyscrapers, winged women and grounded men. The only way they would get together would be in the middle. The society was starting to feel very different to ours. At this point I also imagined how they would have lived as pre-historic people and how their biology affected their day to day life (I like my aliens to have history). I now had a feel for the world and was ready to move on; all I needed was some characters to explore it with.

The details of my world building happen organically as I write. It is my favourite bit of world building. I love getting to watch the world and the story unfold as the characters come to life on the page. 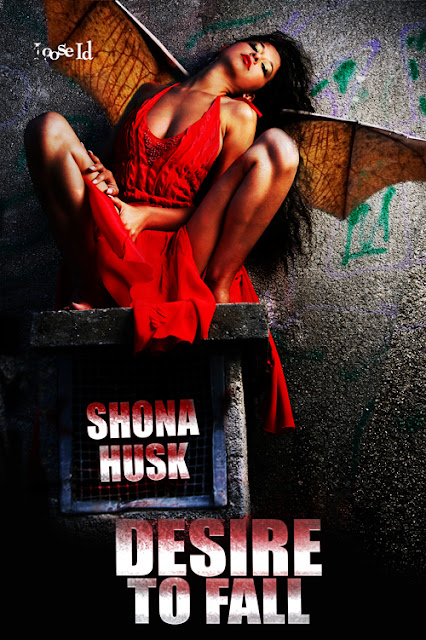 Desire to Fall
by
Shona Husk

In a time of political turmoil on a planet where ménage relationships are the norm falling in love can be dangerous.
https://www.goodreads.com/book/show/26702524-desire-to-fall

With over forty published stories, ranging from sensual to scorching, she writes contemporary, paranormal, fantasy and sci-fi romance.

Email ThisBlogThis!Share to TwitterShare to FacebookShare to Pinterest
Labels: A new world is a blank page, Shona Husk