Five of the Solomon islands are gone for good. 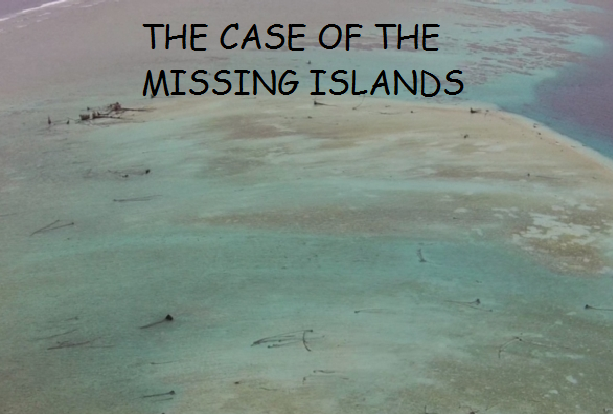 Five of the Solomon Islands are gone and verified missing. Well, they aren't missing, but to visit them you'll need scuba equipment. You could swim down and stare at the 300 year old trees now laying down. Or sleep in a bed.

The fish will probably be fascinated with their new sites.
The octopus may want to take over the bed, so you probably shouldn't try to sleep there. Besides, scuba diving and sleeping don't work well together.

But this time is different and I think it is because of humans. And oddly, I believe our presence has slowed the process of global warming, rather than increase it. I know, sounds idiotic, but hear me out.


First, let's look at the big picture data. For perspective of past events to current temps.  check out the blue comparitively straight line on the right. That's during human time. Then check out the past.

Please Note: The time line alters it's scale from 100 million to 10 million to 1 million to 200 hundred thousand to five thousand.  So the past is far larger in scale than the tiny portion of time that humans have been around. But basically the blue small squiggle line is Human time.


As you can tell, temps used to be hellish and non-survivable at first. Then matters began cooling down. Slowly to what came before, but please note the temperature swings were way beyond what we could have endured. Clearly, the dinosaurs could deal with the heat better than us. Also notice the giant spikes up and down that occur consistently from the green line on to the blue 200,000 year scale.

Note how far the blue swings go both top and bottom compared to the far right human period.  This shows the prior global warmings and then freezings. By looking at our comfort zone on the far right, Earth spends far more time in the freezing zone than in the too hot zone.

To my eye, it appears that in the last 2.5 million years it has only gone dangerously global warm four times. Each and every one has risen and fallen very quickly. Which means our global warming will probably be fast and our freezing will be equally so. There is no survival in this story for mankind.

So why the plateau now?
Here are my thoughts on the matter:
First remember we are just looking at a small slice of the scales size in the other slices of this chart.

Second, we might be the first sentient creature who puts out fires asap rather than run from them. Large massive fires would have swept across the land in prior situations adding cloud coverage & CO2 to help raise the temp high enough for the methane to rise from the ocean bottom.

Regardless of how they start: Volcanic eruption, lightening strike, humans, they need to be handled quickly or you get serious CO2  dumped into the atmosphere. Here's a pic from the Canadian fire recently:

The Canadians had 150 water drop helicopters fighting this monster, but for awhile it looked unstoppable.  During hotter and dryer conditions, it might very well be unstoppable next time.

So back to my premise: Are humans responsible for global warming? We certainly weren't for all the many events that occurred prior to us existing. In fact, our great desire to put out fires ASAP may be why we've remained on a 'safe' plateau of survivable temperatures so far.

Or the small amount of time that our plateau is on is irrelevant when compared to the other scales on the chart.

At this point, I think we are very close to the breaking point. From earlier analysis I've done, the trigger actually appears to be methane, not CO2. Once the oceans warm enough to release the frozen methane that lies deep below, I'm pretty sure the game is over. Not only is it posionous to breathe, but it and the CO2 from burning fires will gather in the atmosphere, thus making it first hotter, then it will actually block the sun, resulting in the next deep freeze...something no human could ever survive if it is like the ones before.

Thus, sending humans into outerspace seems a reasonable action.
Thank you SpaceX for pressing forward even after several failures. You may be human's only hope.

Sorry for another doomsday blog. But the islands disappearing and the giant Canadian fire prompted me to bring it to you attention.

But it doesn't mean you have to be sad or worried. You can instead, focus on your family and friends. Be kind to your neighbors. If we are destined to die, then at least we should go out with a positive attitude.
Posted by Liza O'Connor at 12:00 AM