Today, I give you S.M. Schmitz's newest fantasy. In addition, I ask her some really weird and annoying, possibly non-sensical questions just to test her mettle.

Q: Do you ever put demi-gods, people, dogs, or cats that you know in real life in your stories?
A: Ha! Well, it would be pretty cool if I knew some demigods that I could incorporate into my stories. I don’t base any of my characters on anyone else I know – they are entirely made up. The only person I borrow attributes from is myself; most of my protagonists have pieces of my personality written into them.

Q: Do demi-gods let you plan out their lives, or do they just run amuck in your stories?
A: They’re surprisingly well behaved. It’s the gods I have to watch out for!

Q: How do you think the human race will end:  Super Volcanic Explosions, Pole reversals with deadly solar flares radiating humans while the electro magnetic field collapses, Global Warming, Global Freezing, Methane poisoning due to the methane rising from the oceans,  Global war,  the Zika virus, or some other way involving demi-gods?
A: I think what will kill humans will end up killing most mammals, and it will most likely be to abrupt environmental changes that we can’t adapt to.

Q: Exactly how does a half God come to be?
A: Demigods are the descendants of gods and humans and in many western mythologies, the great heroes of these cultures’ legends are demigods. We’re most familiar with Greek heroes like Heracles and Perseus, both of whom were fathered by Zeus. In my retelling of these mythologies, gods’ genes continue to be expressed through generations so a demigod usually has one parent that is fully human and one who is a demigod. In this way, I have been able to trace ancestries of demigods back to gods who have been dead for hundreds of years (quite a few western mythologies also demonstrate a belief that gods could be killed).

Q: Who do you think should run our world: Demi-Gods, Artificial Intelligence, or some idiot with orange hair?
A: Out of those choices, I suppose I would have to go with demigods. I’ve seen Terminator – AI just seems like a bad idea. Demigods are at least partly human so depending on their personalities, they could either work together to solve global problems or end up fighting and destroying the world… I guess that could go into the above question about how the world will end. J

Q: What is the smartest animal on earth?
A: I used to think humans. I’m not so sure anymore. One of my favorite book quotes is from Grasshopper Jungle by Andrew Smith:  “I read somewhere that human beings are genetically predisposed to record history. We believe it will prevent us from doing stupid things in the future. But even though we dutifully archived elaborate records of everything we’ve ever done, we also managed to keep on doing dumber and dumber shit.”

Hmmm...she did pretty good answering the questions, so let's check out her book.....

Shadows of the Gods, the first book of S.M. Schmitz’s newest fantasy and mythology series, The Unbreakable Sword, just released on May 17. Inspired by her love of world mythologies, The Unbreakable Sword series draws heavily on Irish mythology, particularly the legends of the Tuatha Dé. But for those readers unfamiliar with Irish mythology, they may still find some of their favorite mythological characters throughout the series, although they may appear in unexpected ways! Norse, Slavic, Finnish, Aztec, Greek, Mesopotamian, and Egyptian mythologies all work their way into the series, but as is characteristic of so many world mythologies, allies and enemies aren’t always what they seem.

And as Cameron and Selena will learn, in the final Battle of the Gods, no one can be trusted.

As a special introductory price, you can get Shadows of the Gods for only $0.99 until June 1, when the price will increase to $2.99. 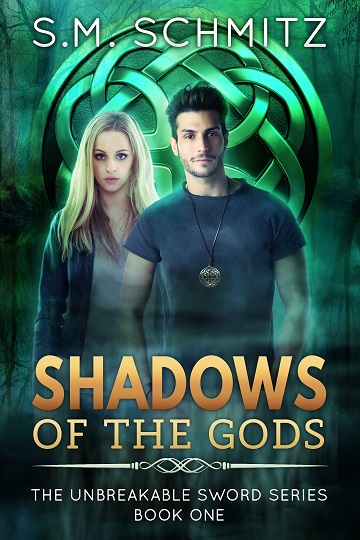 Blurb:
As a powerful demigod, Selena has been running from the gods who control the government agency, the New Pantheon, for the past three years, but now, they’ve caught up to her.
When they trap Selena in an alleyway in New Orleans, she is ready to admit defeat. But an unfamiliar demigod rescues her, and the more she learns about Cameron, the more she discovers their common bonds may be the key to unraveling her own mysterious history.
In the first book of The Unbreakable Sword series, Selena and Cameron must not only evade the New Pantheon, which is ruthlessly hunting the remaining gods and their descendants, but an angry Aztec god that wants Selena’s power to himself. And they will discover in the impending final battle of the gods, no one can be trusted.

S.M. Schmitz has an M.A. in modern European history and is a retired world history instructor. Her novels are infused with the same humorous sarcasm that she employed frequently in the classroom. As a native of Louisiana, she sets many of her scenes here, and like Dietrich in Resurrected, she is also convinced Louisiana has been cursed with mosquitoes much like Biblical Egypt with its locusts.

Newsletter sign-up link and to get a free copy of my post-apocalyptic novella, The Scavengers: https://www.instafreebie.com/free/pLwvT

Book Trailer – YouTube:
https://youtu.be/ORdAqis_Lrc
Posted by Liza O'Connor at 12:00 AM