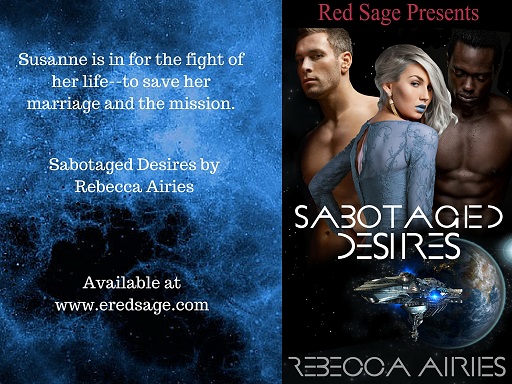 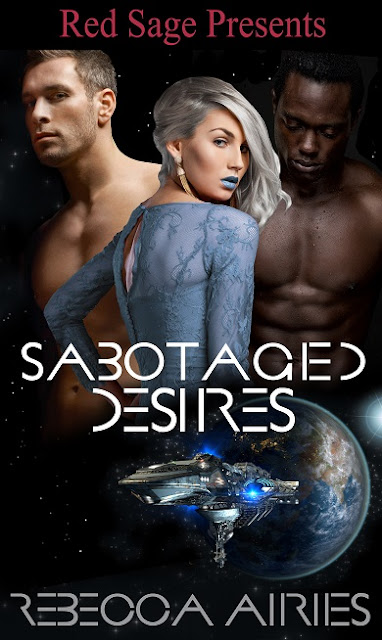 Blurb:
Suz Lore thought she had everything she wanted, a job as an engineer and a position on a colony ship headed to another planet. That was before her arranged ménage marriage with Robert Smith and David Bradford turned into a disaster. She’d thought they were building more than a sizzling sexual relationship, but all they do is argue now. She isn't surprised when they're sequestered in a room in order to reignite the passion between them and learn to trust again.
Robert believes she betrayed him while David is stuck in the middle of their conflict. Getting Robert to talk about what made him angry is difficult, but they discover there's far more behind their problems than a message with misleading information. A virus has overtaken the ship's computers, put them on a different heading and cut them off from all communication. They must work together to find a way to survive and rebuild their relationship

Red Sage Buy Link:
http://www.eredsage.com/store/SabotagedDesires.html
PG excerpt:
“Get your ass to the hatch and let us out now,” Robert yelled.
Ever the demanding Captain. Robert expected people to follow his orders immediately.  He’d behaved like an ass lately. That arrogance set her nerves on edge. His tendency to bark out commands even when on personal time made her want to rebel or strike out at him.
The argument hadn’t stayed within the confines of their quarters. Suz didn’t know how he was surprised that they’d been placed here. At the moment, his yelling was getting on her nerves.
“They won’t let us out. Not until they’re convinced our problems are solved.” She eased to the edge of the big bed. At least, she wasn’t nauseous from coming out of stasis or have a headache any longer.
David strode to the side of the bed, sat beside her and put an arm around her shoulders. “Are you all right?”
His dark blond hair stuck up in spikes, looking delightfully mussed. She only wished she’d been the one to run her fingers through it. Concern turned the corners of his full lips down. His muscled chest was bare offering yet another lure for exploration and he wore only loose, light blue pants which most men chose to wear into the stasis pods.
“The pain has faded. I sort of expected this after our last rotation, although waking up from stasis in this room scared me and for a little while, I didn’t realize what had happened.” She relaxed against the strength of his arm for a moment. Normally, they were left in the open cryopods until they were able to walk. She’d almost panicked when she woke here. Her heart had felt as if it were going to burst through her chest.
The feel of his muscled body against hers soothed a little of the tension and worry. Between David and her, they would find a way to get through to Robert. Even though they couldn’t get out, she didn’t fool herself that this would be easy.
“So did I. I think he’s the only one who thought things could go on as they were.” David smiled and used his free hand to brush the silver blond hair away from her face.
“They should stay out of our business.” Robert glared at her.
His dark brown eyes moved from her to David. He didn’t look mussed or even sleepy as David did, but then again, his close-cropped black hair always seemed to be in perfect order. The dark brown skin of his chest gleamed. Her eyes hungrily trailed over the expanse and down to the white shorts at his waist. Even though anger pulsed through her at his stubbornness, she hungered for his touch. Her body remembered the pleasure he’d given her.
“Our business is everyone’s concern. We’re on a colony ship. There are only married groups here. There aren’t extra women and men and our group will be the only people on the planet until more colonists are sent, which could be years. The crap you’ve been doing can’t continue.” David straightened a little and his eyes locked on Robert. 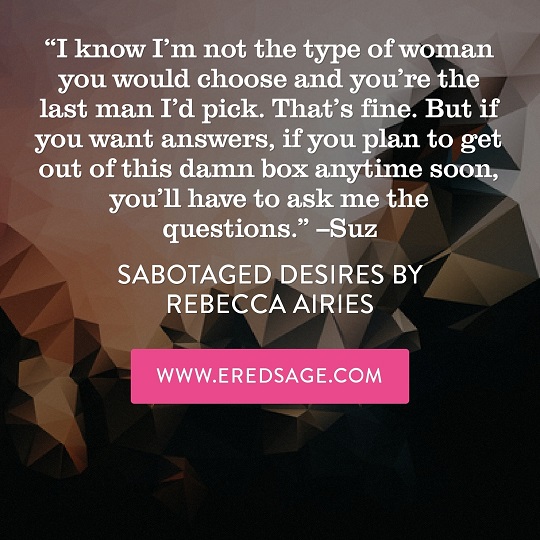