Guess how many serious earthquakes we get a year. Don't Google...guess:

I got to pondering this when we recently had four major earthquakes in four consecutive days.

Burma, then Japan, the Japan again, then Equador.

As you probably know, I'm fixated on the flipping of our magnetic poles as a potential lethal occurrence for mankind and unlike global warming, there is NOTHING we can do to  stop the flipping of poles. It's just something Earth does and the time for a flipping is here...well actually, it's past due. But maybe like the supervolcano that lies beneath Yellowstone park, it's nothing to worry about.
Before you get too complacent, be aware of a few facts:
1) The flipping of the magnetic poles takes from hundreds to thousand of years to complete. It's a slow process  and during the process, there are a few problems.
2) Flipping in the past has occurred normally every 200-300 THOUSAND years, but it's been 780,000 years since our last flip...maybe...
3) So one can presume it could start flipping any time. In fact, some people suggest the flipping may have already begun--we just don't recognize it or it's not something anyone wishes to share because there is NOTHING we can do about it. But it could be why so many countries are interested in space travel and moon/mars colonization....or not. Maybe they just want to spend all their money on space travel to keep up with everyone else. Or maybe they realize Global Warming is occurring and want off the planet.
There are a lot of maybes....

So let's talk about what happens when the poles reverse.
Let's make it  a short reversal...say 200 years, (they can go on for thousands of years).
According to geologists, the flow of liquid iron in the core of our planet creates electrical currents, which in turn creates the electromagnetic shield that helps protect us from sun's radiation via solar flares.

This flow of liquid is constantly changing. Back in early 20th century, the magnetic north pole migrated 10 miles each year. Now it migrates 40 miles each year. (So it looks to me like we are in the reversal process.) Since the early 19th century the North electromagnetic pole has shifted 600 miles, so it is unquestionably on the move....and we are still alive, so all is well, right?

If you want to feel good, read NASA's response written in 2015. You'll sleep like a baby...if you believe them.
http://www.nasa.gov/topics/earth/features/2012-poleReversal.html

It's a very fine sleep-easy piece, but with no scientific backing in my opinion.

Here are my main issues:
1) Recently I read an Article in Scientific America that revealed our current methods of dating the past makes it very hard to match cause to effect connections such as a prior reversal wiped out x% of species on earth.  However, there 'appears' many species annihilations do occur during prior reversals, so I've no idea how they can claim the reversals have NO impact on species survival with certitude.  I'm not ready to say it is the only or even the main reason for some species extinctions, but since we cannot yet properly date the time of the events precisely, no one should be claiming it is NOT the cause. We simply don't know.

2) The effects of a reversal on humans will be very different than the reversals on a T rex. However, we cannot rule out the damage that collapsed and partially collapsed electromagnetic shields had on the animals. Solar flares could have caused cancers to form in the animals as they were bombarded with weakened shields over thousands of years. Thus, they would not die all at once, and thus a correlation of death to the reversal would not be made, even once we do get our dating correct.

3) To the best of our knowledge, no other animal other than humans has captured electricity and made it the backbone of their society before. If there was a prior species that harnessed electricity and created a modern society, they were evidently wiped out, probably in a reversal of poles, because all societies that depends on electricity will be severely impacted by a reversal.

4) And I totally, adamantly, and annoyedly disagree that 'our atmosphere' can protect us from solar flares even if the electromagnetic shield falters. That is simply untrue. We incur black outs even with out shields working. 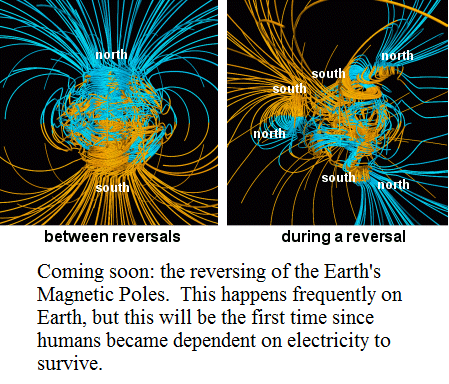 5) I also challenge the last reversal occurred 780,000 years ago. I believe they have skipped two more recent reversals and ponder why they did so.

6) However, to the point that got me on this topic once again. Scientists (not the ones writing "calm the peeps" pieces) do not believe there is any correlation between pole reversals and earthquakes.  It would take tens of millions of years for the core flows to impact the outer crust of Earth.

Okay, there doesn't seem a correlation, unless we are being impacted by the reversal that occurred 10 million years ago... but related or not, there isn't much we can do about earthquakes either.

They are simply a reason why we need to colonize other worlds IF we want to keep humans alive. Until then, expect more shaking.