Today, we have Callie Borde and her sci-fi, Colors of Power, which comes with a touch of romance. 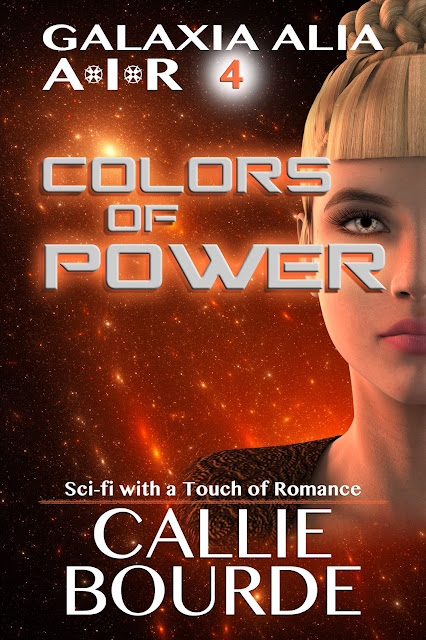 A serial killer is operating in the Galaxia Alia. Senior Investigator Baath Drid is determined to prevent more deaths.

Artist Jaimi Tarnii has left crime scene work behind. Will she agree to help him?

Jaimi paused at the door, foot traffic moving behind her. The Gentle Winds Commerce Court on Jump Station Delta was busy – she saw many civilians and even more tourists. Happily, the restaurants and stores looked like they provided an interesting mix, good news for her workshop and retail business. She should do well here.

Her shop was on the first of five levels of stores, restaurants, and businesses that were arranged on mezzanines open to the central fountain. The “gentle winds” actually referred to small ornamental trees from a little known planetary system in Gamma Sector, whose dramatic turquoise and coral blooms, shaped like small birds in flight, provided the color cues for the whole commerce court.

She still could not believe that this was happening. She smiled at herself in the heavy blastglas of the door and set her palm to the lock. There was a snick and she pulled the door open.

Leaving it ajar, she glanced around. This area, roughly a square, was separated from the rest of the larger space by a half wall which formed a display counter. It was planned as a combination gallery and retail shop and would be perfect for her.

The workshop extended behind the low wall. It was twice the size of the gallery, forming an ell, with the retail space as the short leg. The area directly behind the counter was in full view, while the rest of it was around the corner and out of sight. There were two large loading doors in the back.

The high ceiling provided plenty of height to display her large wallhangings and plenty of room back in the workshop to create them.

Lost in her thoughts, she started when a tentacle passed in front of her eyes and a mechanically produced but pleasant voice spoke in her ear. “Sustenance!”

Eagerly, she grabbed the proffered mug of caf’eene, and the tentacle whipped away. Still looking at the workroom, she said, “Thanks. I needed that, but I’ll never understand how you can be so quiet.”

The large land based cephalopod behind her snickered. “Just part of the skill set for any apex predator.”

It was a running joke, and keeping to the script, Jaimi said, “Well, just remember, eating your employer can be a strategic mistake… if you want to be paid.”

They had met on the first day of school. Two of the smallest students, they’d been mercilessly bullied. Their friendship had endured through university and beyond. It was the two of them against the world…

Now, a tentacle wrapped around Jaimi’s shoulders and she was pulled close. She relaxed against her best friend as Alig asked quietly, “How are you doing?”

“I’m fine, but I will admit, part of me never believed this dream would actually come true.”

“I always knew it would. This is by far the best use for someone with your talent.” Alig wrapped a second and third tentacle around Jaimi, giving a more thorough hug, before releasing her. “It’s safer, too.”

When Jaimi ignored the last comment, Alig delicately swiped her tablet screen. “According to this, the first grav-sled of equipment should be arriving right about… now!”  A fourth tentacle pointed at the loading doors, just as the security buzzer sounded.

Moving swiftly on her rear tentacles, Alig headed to the door. At the second buzz, she called, “I’m coming. I’m coming. Settle down already!” Over her shoulder, she said to Jaimi, “Now remember, let me handle this. This is the time to let people know that you’re the Artist and too important to deal with the day to day. You have a shop manager for all that.”

I have really enjoyed planning and writing this series, even if I *seriously* underestimated the world building.
The Galaxia Alia universe, and specifically the Artist in Residence Series, is what happens when a serial crafter writes SciFi. ;-)
Each story ties in to a craft that I have either done or wanted to do or know someone who does… Most fall into the first two categories.
In college, my area of concentration was Lighting Design, like An’Ish in Beams of Power.
While I have always done artistic things, professionally and for relaxation, *just drawing* wasn’t one of them. I DID learn to make perspective drawings for my MFA in Scene Design, but just sitting down and drawing? Not so much…

When I first heard about and researched Zentangle, it struck a chord with me. I could understand its appeal in terms of its *no pressure, the joy is in the doing* mindset.

When I started working on the Galaxia Alia universe and the Artist in Residence series, playing the *What-if* game with the idea of Zentangle and Doodling was a natural progression. In fact, I have detailed story notes on each of the AMA levels. ;-) They didn’t make it into Glyphs of Power, but maybe later on!
These days, my Go To Craft is beading, in part because it is portable. A few years ago, my mom (who has since passed) went through several hospitalizations. I was her main caregiver. Because she had a problem with sundowning,(Isn’t that an amazing term? It means late day and night time confusion.) I would spend the night at the hospital with her, sitting beside her bed while she slept.

I beaded a LOT of the rope necklaces mentioned in Strands of Power. I could bead half a necklace in one night. At the moment, I am beading a silver and gold necklace for my sister, while listening to writing blogs.
I have a lot more books planned in the AIR series, so I hope you’ll think about joining my list… You can sign-up on my website.