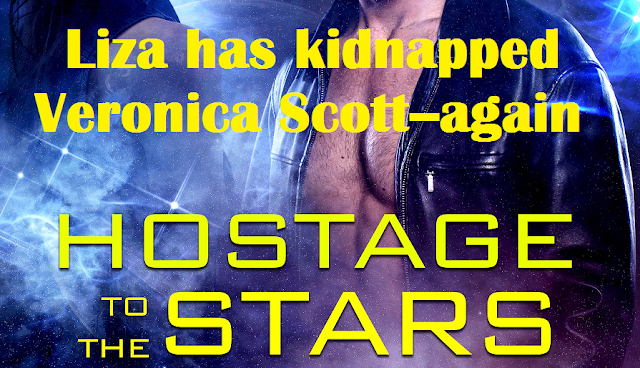 Veronica: Thanks for having me as your guest again today!

Liza: I love having you over. That duct tape isn't too tight, is it?

Veronica: No, it's fine.

Liza: Great. So what have you brought to entertain us today?

Veronica: This year is the 30th anniversary of my favorite movie in the world – “Aliens.” I’ve been soaking up the discussions, the reunions, the Comic Con panel (no, I didn’t get to go but it’s available on youtube). What is not to like about this movie? A kickass heroine who knows her stuff, is no damsel in distress, isn’t afraid to speak up, take charge, kick Alien ass and take names. The sexy, laconic, totally competent space marine hero with a charming Southern accent (my particular weakness in men) AND a pulse rifle. Well drawn secondary characters, good and bad, spaceships, cryo sleep, androids, face huggers, small group of people stranded in a deserted place….oh YES.

On of my favorite parts of the movie is how subtly Ripley takes charge, after the debacle where most of the marines die in the atmosphere processor. I think she and Hicks are equa,l and technically he’s in command, but even he looks to her at certain points.

If I’d written it – with all due respect to James Cameron and Gale Ann Hurd, and the 1980’s -  of course there would have been much more romance between Ripley and Hicks than a few looks and a chaste exchange of locator device bracelet. “Doesn’t mean we’re engaged or anything.”

My second favorite science fiction movie is the original 1951 “The Thing From Another World” – similar setup, complete with sexy (for the 1950’s) Air force captain, heroine with unusual gumption and smarts for a scifi movie of the time, actual romance!!!, people marooned in a small, hostile place being chased by an alien who wants to kill them.

Do we see a theme here? When I’m writing a science fiction romance novel I strive to achieve the same general tone (not necessarily all the exact tropes) of my favorite movies. Thus you’ll usually see a Special Forces hero and a strong, smart civilianheroine in some dangerous situation, working together to solve the problems and save lives. Romance grows with the team work and mutual respect developed during  the situation.

I haven’t written a strong female Special Forces soldier heroine novel as yet, although I have one waiting for me to find all the elements of her story (and readers asking me to write one).  If you’ve read the STAR CRUISE books, you may have noticed a Security Officer named Jayna in some of the action. So she’ll get her book in 2017, I’m guessing.

What are your favorite scifi romance tropes? 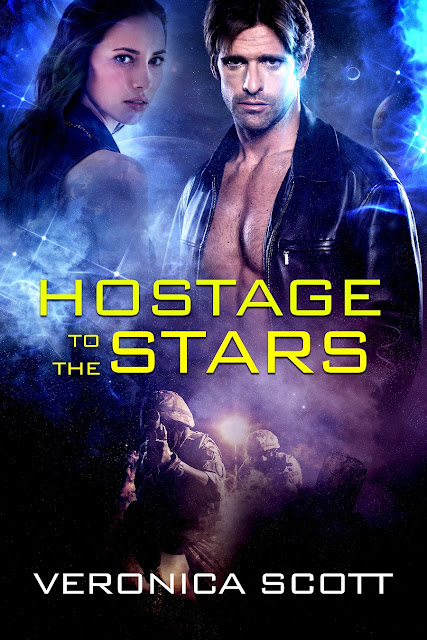 My latest novel:
HOSTAGE  TO THE STARS:
He rescued her from space pirates … but can he keep them both safe from the far greater evil stalking a deserted planet?

Space travel without Kidnap & Ransom insurance? Not a good idea. University instructor and researcher Sara Bridges can’t afford it, so when pirates board her cruise liner, she’s taken captive along with the mistress of a wealthy man, and brought to a deserted planet. When a military extraction team sent to rescue the mistress refuses to take Sara too, she’s left to the mercies of a retired Special Forces soldier, along as consultant.

Reluctantly reactivated and coerced into signing up for the rescue operation to the planet Farduccir where he once was deployed,  Sgt. Johnny Danver just wants to get the job done. But when the team leader leaves one captured woman behind, he breaks away to rescue her himself.

As Johnny and Sara traverse the barren landscape, heading for an abandoned base where they hope to call Sectors Command for help, they find villages destroyed by battle and stripped of all inhabitants. A lone survivor tells a horrific tale of the Sectors’ alien enemy, the Mawreg, returning after being pushed out …

Searching for evidence to give the military, Johnny is captured. He regains consciousness in a Mawreg cage–with Sara next to him. Death is preferable to what the aliens will do to them… And even if they do escape their captors, can they alert the military in time to prevent another invasion of the Sectors?
Standalone sequel to Mission To Mahjundar (mild spoilers for Mahjundar in this story.) 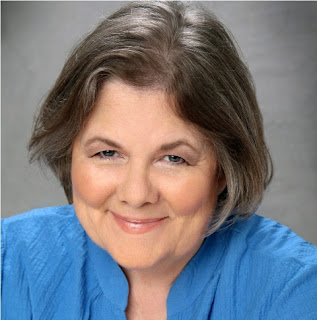 Best Selling Science Fiction & Paranormal Romance author and “SciFi Encounters” columnist for the USA Today Happily Ever After blog, Veronica Scott grew up in a house with a library as its heart. Dad loved science fiction, Mom loved ancient history and Veronica thought there needed to be more romance in everything. When she ran out of books to read, she started writing her own stories.

Three time winner of the SFR Galaxy Award, as well as a National Excellence in Romance Fiction Award, Veronica is also the proud recipient of a NASA Exceptional Service Medal relating to her former day job, not her romances! She recently was honored to read the part of Star Trek Crew Woman in the audiobook production of Harlan Ellison’s “City On the Edge of Forever.”