Check out the Secret Supers series by Aurora Springer, Bk 2 recently out. 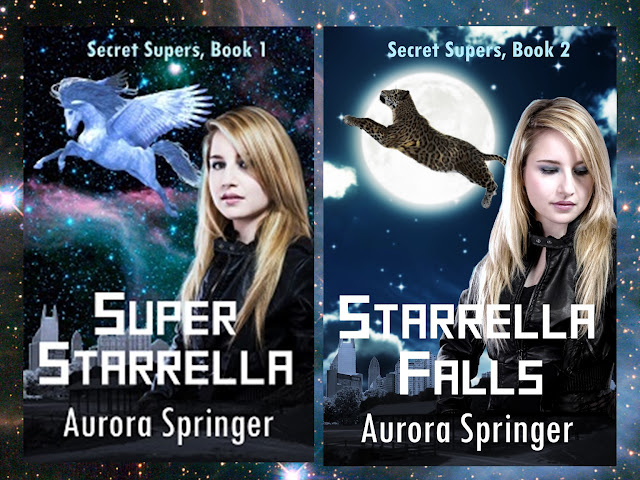 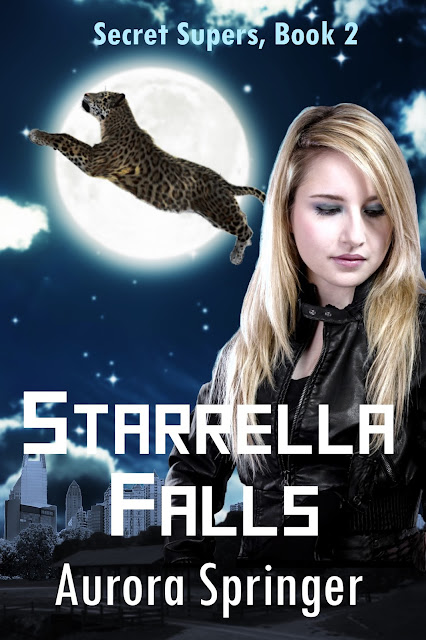 College freshman Estelle Wright has it all: a superpower, a flying horse, and a hunky boyfriend. All is threatened when her old enemy swears revenge, ruthless killers target Atalanta, and Toby is under pressure to dump her. But, Estelle’s knack of finding trouble scuttles his plans. With their lives at stake, they face agonizing decisions where the wrong choice leads to disaster.

If you enjoy superhero adventures with quirky animals, thrilling chases and a rollercoaster romance, read this fun story.

It’s non-stop action from beginning to end. This time, the giant creatures threatening humans are reptiles…far larger than they are supposed to be. The romance between Toby and Starrella looks shaky through much of the book, but love always finds a way.

I give this a 4.5 rounding up due to so much action. I lost count of all the attacks…seriously.

Excerpt
Their meals arrived and Toby tackled the burger with his usual gusto. While he was occupied with the food, Estelle chewed slowly and stared around the pub. A man entering drew her attention by his formal attire of a dark suit and tie, unlike the regular customers in their casual clothes. A short beard and dark glasses hid the stranger’s expression. He strolled to the bar and stared at the rows of bottles on the mirrored wall.

Estelle nudged Toby. “Don’t look yet. He just came in.”

“Who?” Toby mumbled through a mouthful of fries.

She hissed in his ear, “I think it’s Croaker in disguise. Imagine him with a beard.”

“Blast! He’s seen my photo from those kidnappers.” Toby swallowed his fries too fast, and smothered a cough with his hand. Examining his half empty glass of beer, he looked around as if in search of the waitress with a refill. “Reckon you’re right,” he whispered. “He’s seen us. Watch out! Croaker’s dangerous. Uses poison darts.”

Squeezing his fingers, Estelle hissed, “Okay. What’ll we do?”

“Finish our food, pay up and walk out like we’re cool.”

“Sure. My hands are itching to flame.”

“See what he does first,” Toby advised. “Don’t want to create a scene.” He beckoned to the waitress and asked for the check. While they waited to pay, he asked, “Where’s the mare?”

They eased out of the booth. Toby slipped his arm around Estelle’s waist and they strolled to the rear exit leading to the parking lot. Estelle glanced back before they reached the door. Croaker stood facing them.

“Call Rockette,” Toby whispered. When they stepped outside, Toby gestured for Estelle to wait where she would be concealed behind the door. “Let him spot me first.” He walked to his motorcycle and bent on one knee, pretending to examine the front tire.

The man came out and focused on Toby. His face twisted in an evil smirk and he raised his hand. A needle point glinted. Estelle blazed at his fingers.

He dropped the dart, cried a Zarnoth curse and lunged at Estelle.

Racing across the parking lot, Toby grabbed Croaker’s arm and swung him round. In a blur of motion, a second dart shone in Croaker’s hand. Toby punched his fist into Croaker’s chin.

Croaker crumpled. Catching him under the arms, Toby eased him to the ground.

Brakes squealed and a man yelled, “Hey!” Mark Copper jumped out of his white sedan and Diane slid out of the passenger side. “What’s going on?” Mark called.

“What guy?” Mark strode over and stared at the body.

“Croaker, the man wanted for murder,” Estelle explained. “We recognized him when we were in the pub. He followed us out here.”