Kyndra Hatch shares her Aliens in the Barn, and Liza reviews them. 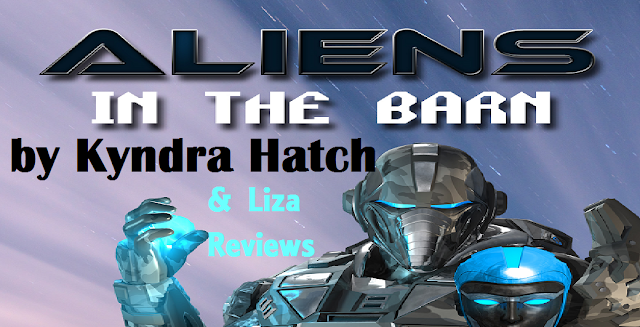 Today, I reviewed Aliens in the Barn, because frankly, I wanted to know why they were hanging out there. Not sure I ever got the answer, but I sure did have fun. So I invited Kyndra Hatch over to talk about her frisky cyborgs. 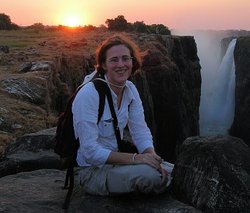 I love cyborg stories. Anything with a cyborg in it and I’m sure to love it. But, I also love aliens. The more alien the better. “Farscape” was a great show with how alien the characters were. What I wanted to do was mix the two. What if there were alien cyborgs?
Of course, there are plenty of alien cyborgs, but I wanted them to be really alien. Not just alien in that they are from another planet, but alien in that they are so completely different, not even organic. What if the alien beings are made of pure energy? What if they have to be cyborg in that the only way to contain their individual energy is by having a mechanical body built around them?
And this mechanical body can have numerous modifications, whatever each individual needs for his/her function. If he’s a soldier, he’ll have weapons built in. If he’s a welder, he’ll have welding tools. Even better, what if the aliens can manipulate the metallic portions of their bodies with their energy? So many possibilities! Now, throw a couple of them in the midst of humans, who have a hard time relating to something that isn’t organic and vice versa.
Of course, the definition of cyborg is an organic being with mechanical elements built in, but that is the human definition. From the aliens’ point of view in my stories, they would be cyborg in that they are energy beings with mechanical elements built in or added on.
I had such a great time writing “Aliens in the Barn” with both the human and alien cyborg reactions to each other. I’m working on a broader storyline, but wanted to introduce these particular aliens first. It might have ended up being more confusing than I intended, but my editor and beta readers loved it and the highly amusing reviews are more than worth it.
“Aliens in the Barn: 4 Short Stories of Mech Alien Romance and Misadventure” is introduced in the format of the TV sitcom, “Life in Pieces.” It follows the everyday lives of the Maddox family and their alien residents, shown through four short stories in one episode.
Happy reading! 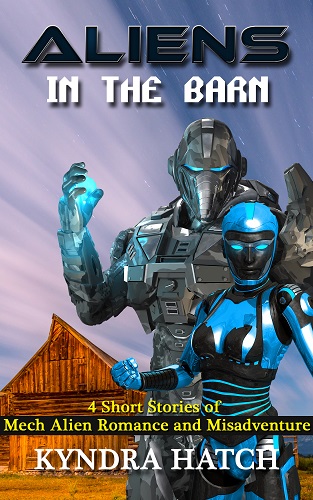 Description of Aliens in the Barn:
4 Short Stories…:

Four short stories of romance between Bazin and Miaxa, two alien beings from the planet Beryll. Finding themselves on a previously unknown planet, Earth, they grow fond of a human family. Cultural misunderstandings are a constant, the day-in-the-life misadventures of Bazin and Miaxa and their human friends.
Alexander Maddox has a special job with the government involving aliens from another world. The ones living in his barn were unexpected. Misunderstandings a daily occurrence, he is sure his resident aliens will be the death of him. A life in pieces collection of the Maddox family's everyday life with their alien residents.
Aliens in the Barn:  There’s a mechanical extraterrestrial living in Alex’s barn, but what will happen if the alien’s wife arrives? Wait, Bazin’s married?
Scared to Death:  Beth has been married to Alex for over a year and he still can't make it home for dinner. Why do he and his coworker friend spend so much time working on that truck in the barn?
The Skellyd Hunters:  With a core-bonded strength few understand, Bazin and Miaxa are Beryll's finest warriors. Sometimes they go a little too far and Andler is left with the consequences, for better or worse.
Meet Douglas Fir:  Being human isn't easy with robotic alien residents misunderstanding the simple stuff. Alex can't imagine his family life without Bazin and Miaxa, however. Time to have them over for Christmas.

Excerpt
from Aliens in the Barn:

As Miaxa’s current form grew larger in the rearview mirror, Bazin took control of the truck again.
Alex threw up his hands. "Come on, Bazin!"
Bazin revved the truck, no intention of speeding up. The arc of lightning that passed from Miaxa just as she connected with the bumper? That was unexpected.
When Alex started jumping and yelling as if the cab were suddenly full of rattlesnakes, he knew he had been unsuccessful in preventing the electric shock from passing through. When a thrill like he hadn’t felt in a long time coursed through his system, he knew he was unsuccessful in preventing the aftershock, too. The console was covered in arcs of lightning, jolts of electricity shooting through his system in wave after delightful wave.
The human was obviously not having the same thrill, yelling and cursing, trying to stand up off the seat, only to be electrocuted through those spindly legs as soon as his booted feet hit the floor. Alex tried pulling up on the steering wheel, but judging by the loud crackle of sparks that traveled from his fingers up his arms, Bazin was guessing that didn’t help at all.
"Owww! Bazin? What the hell…Argh!" Alex screeched.
It was difficult to tear away from the wonderful sensations, but Bazin managed to speed up the truck, edging a little distance from the Jeep.
"Quantus, Miaxa," he sent through their bond. "You're going to make me electrocute my human."

Strange, very silly, but entertaining novelettes made of four scenes with confusing robot erotica sprinkled in. (confusing, because parts aren’t the same as human parts, so you don’t know if you should blush or grab a can opener.)


A unique read for sure. I’ve never encountered robot erotica, but I’m pretty in two of the novelettes I was blushing, but over what I’m not sure.

The four novelettes begin with the arrival of Bazin’s CORE. (Not wife, CORE.  How hard can this be for a human to grasp?) Yet Alex keeps calling Miaxa his wife. Warning: there appears to be confusing erotica occurring, only since they aren’t organic,  I was on occasion too confused to be sure.

In novelette two, Alex’s wife discovers his friend Bazin, is neither a human nor normal robot. And she did the only practical thing she could: She fainted.  When she wakes up, Alex declares Basen from… (then he points at ceiling of barn, which could have been rather misleading). Beth wants nothing to do with the nonsense, she just wants Alex to come to dinner on time! Now that she knows Bazin isn’t just a jerk human, she grows to like him.

In the third novelette Bazin and Miaxa burn Alex’s barn down, which I’m pretty sure happened when they overheated in what I’m tagging non-organic erotica if we only could comprehend exactly what they did. (Get Amazon to make that a genre and you’ll be a best seller in no time at all).

The fourth novel is my fav. No strange erotica, because it’s Christmas. But the trees don’t do well, nor does one of Beth’s eyebrow, but no one ever said Christmas would be normal. (Mine never were.)

My advice for anyone who wants to read this book: grab a bottle of mind altering anything, enslave a robot to read for you, kick back in a recliner and enjoy the fun. It’s silly, weird, and funny. But I’m telling you the truth, the robot erotica confused me to no ends! Nonetheless, I give it five stars. Too funny to do otherwise.

Kyndra Hatch grew up with a fascination for science fiction and a deep interest in ancient civilizations, a combination which fuels her active imagination. After twelve exciting years as an archaeologist, Kyndra has decided to take a break from her career to have more time with her husband of nearly two decades. She pursues a passion for writing and is an active member of the SFR Brigade. Her debut story, "The Stranger," won the 2014 SFR Galaxy Award for Outstanding Debut Story.
“The Stranger” can be found in the anthology, “Tales from the SFR Brigade” and is set in the same universe as “Aliens in the Barn.”
“Aliens in the Barn” is featured in the anthology, “Romancing the Stars: 8 Short Stories of Galactic Romance and Adventure.”
Kyndra is currently working on a series for this universe: Fracture. Visit her blog for updates and coming release dates. Thanks for reading!
Website: http://kyndrahatch.blogspot.com/
Twitter: @kyndrahatch