S.M. Schmitz shares The Chosen and how it came to be.

Today, I have the fabulous S.M. Schmitz over sharing her latest: The Chosen. Let's discover what it's about. Take it away S.M.S!

A little about The Chosen and the Resurrected universe

I published the Resurrected trilogy last year with several different goals in mind. First and foremost, it is a love story and one that is meant to defy all that we believe is possible. But there are some challenging scenes in the original trilogy, and the violence is a direct reflection of my days as a world history instructor when I often found myself surprised by the desensitization to violence by young adults today. Finally, the original trilogy isn’t just a second chance romance. The love stories aren’t even just romantic love. I wanted to demonstrate the power that all love has, and the friendship between Eric and Dietrich is key throughout all three books.

I’ve always wanted to return to this universe, so this summer, I decided to write a spinoff standalone to the trilogy. I wrote it so that it wouldn’t be necessary for someone to read the trilogy first and, hopefully, won’t give away spoilers if they wanted to read the first three books after reading The Chosen.

This novel focuses on a different cast of characters, and offers readers another perspective on what it’s like to cross over to Earth and begin a new life. Our heroine, Bella, came to our planet for the chance to live in peace with the man she loved. But just as with Lottie, when Mason brought a body back to life so he could live here, something went wrong. And for him, the consequences are deadly.

The Chosen is a story of revenge and finding love again. And most importantly, it’s a story about the power we each have to control our own lives. 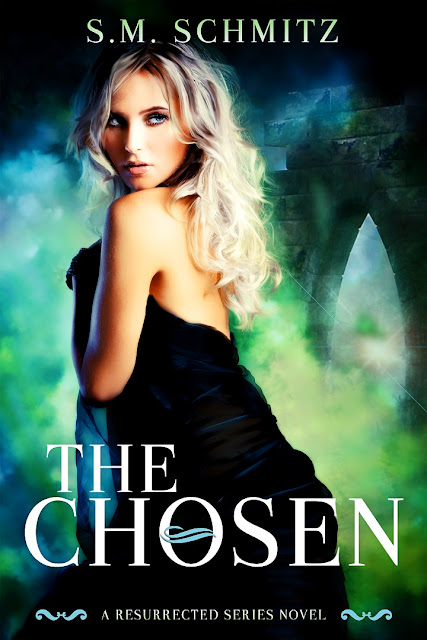 They promised her happily ever after. Instead, they gave her Hell. Now, she's getting revenge.

When Bella agreed to travel to Earth to start a new life with the man she loved, she’d been promised two things: healing dead human bodies so they could live on this planet always worked, and they could have the happily ever after forbidden to them at home.

But soon after arriving on her new planet, she discovers both of those promises were lies. And the consequences for trusting the wrong people are deadly.

After six years of hiding from the company that helped her cross over, she is approached by a beautiful but mysterious stranger who offers her a different kind of promise: the chance for revenge. And Bella’s journey to end her own nightmare and to seek justice for the man she’d once loved is finally able to begin.

S.M. Schmitz has an M.A. in modern European history and is a former world history instructor. Her novels are infused with the same humorous sarcasm that she employed frequently in the classroom. As a native of Louisiana, she sets many of her scenes here, and like Dietrich in Resurrected, she is also convinced Louisiana has been cursed with mosquitoes much like Biblical Egypt with its locusts.

Link to join newsletter and receive a free copy of my post-apocalyptic novella, The Scavengers https://www.instafreebie.com/free/pLwvT