I’m super excited about the release of Liza’s Scavenger’s Mission in October. Judging by the blurb, Alisha, the heroine, is strong and rebellious and extremely interesting. She reminds me a bit of Imee, my heroine in Chasing Mayhem.

Imee is a Retriever, a bounty hunter of sorts working for the cruel and controlling Humanoid Alliance. The Humanoid Alliance has captured her family. She’s forced to do their dirty work, hunting down their rebels. If she doesn’t meet her quota, her family is sent to her…in pieces.

Both heroines have high-risk jobs. Alisha, a pilot, crashes and almost dies. Imee, a Retriever, deals with dangerous beings, rebels who know if they’re caught, they’ll be killed. She has almost died many times, and when she meets the hero, Mayhem, she realizes she’s finally met a target she can’t subdue. He’s a cyborg warrior, skilled in battle. She’s human, able to fight but she doesn’t have his strength or speed.

Mayhem loves that Imee is a powerful, independent female. He admires her warrior spirit, her muscles, her skills with a dagger. She’s larger than the average human female and he loves that also. Cyborgs aren’t small males. (grins) They appreciate curvy females.

This admiration and respect doesn’t stop Mayhem from wanting to protect Imee. She’s human and can’t heal as quickly as cyborgs can. He sees her kindness, her reluctance to harm others, her yearning for love, and wants to shield her from any pain.

Strong people don’t have to be strong all the time. When they’re with beings they trust, they can let down their guards. They can lean on these other beings. They can ask for help.

The issue is… Mayhem is Imee’s target. He’s one of the rebels she is supposed to retrieve for the Humanoid Alliance. Can she trust him? Can he trust her? Without trust, can love grow? 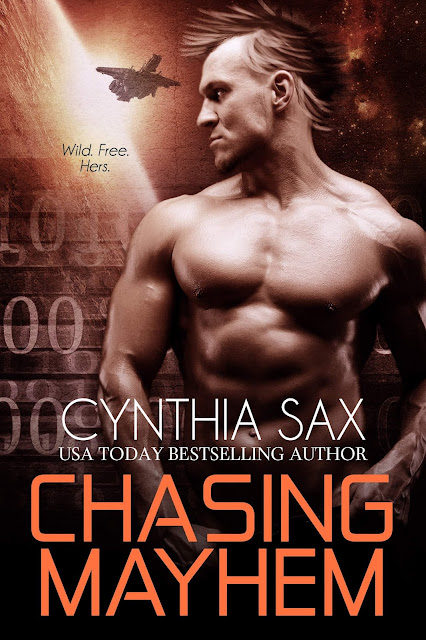 Mayhem has spent his lengthy lifespan obeying the Humanoid Alliance’s rules. Finally free from their cruel control, the cyborg warrior plans to cause chaos. He infiltrates a remote settlement, provokes the savage locals until they want him dead, and allows himself to be captured by the sexiest little Retriever he has ever laid his mechanically-enhanced eyes on.

Imee’s sole mission in life is to keep her family alive. To do this, she must hunt rebels, returning them to the Humanoid Alliance’s evil clutches where they will be executed. She doesn’t allow herself to feel anything for her targets…until she meets a tall, muscular cyborg with wild hair and even wilder eyes.