I'm so excited. Teresa Noelle Roberts is sharing her BUCK, NAKED book with us. I'll try to be mature and behave, but no promises... 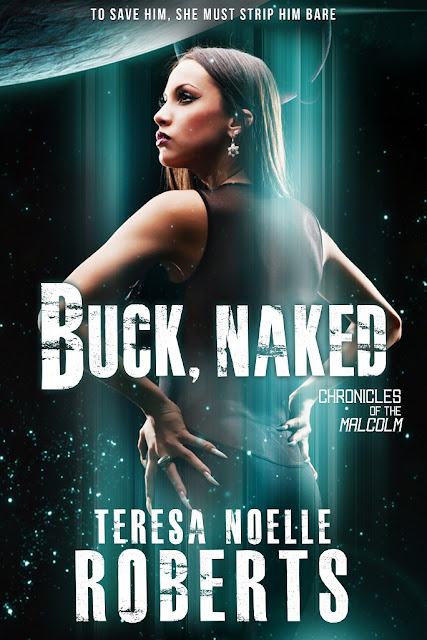 To save him, she must strip him bare.

Security expert Buck’s senses are inhumanly keen, to the point he can see through time and space, and that’s just the start of his odd abilities—thank you, alien captors. He also experiences paranoia, flashbacks, and the occasional hallucination—thank you, PTSD. No wonder he fears he could hurt one of the Malcolm crewmates he lives to protect, the closest thing to family he has left after the destruction of his home planet.

Brilliant scientist Aleema can teach him how to use his modifications without triggering PTSD. She’s survived the same meddling aliens and suffered even more dramatic alterations. At least her unwanted immortality means she’s had time to figure out how the modifications work and use the knowledge to aid other survivors. Helping Buck means spending some serious time together.

Time enough to fall in love.

Just as happiness seems within their grasp, Aleema realizes one of Buck’s modifications dooms him to an unthinkable future. To save him, she must place herself in the hands of their common enemy and leave Buck to face his worst fears without her.

If you've read the previous Chronicles of the Malcolm books, Thrill-Kinky and Bad Kitty, you already know Buck's a little damaged. In this book, we learn he was the victim of alien medical experiments as a POW, and they've had lasting effects--ones that will either make him more than human or destroy him. Scientist Aleema may be the only person who can help him, but she's been warped by the same aliens. This except shows an early interaction in which they’re still feeling each other out. Buck’s jumpy about Aleema’s obvious alien differences, but still fascinated by her as a person—and specifically as a woman. He reached for his laserpistol. Most of the time, folks didn’t catch him drawing until it was too late.

But Aleema just shook her head and grabbed his wrist. “No, Buck,” she said calmly, not raising her voice. “I’m not your enemy.”

He grabbed the knife in his other hand, raised it to a defensive position.

Then he let it clatter to the cutting board, feeling as if his hand had lost all his strength, though she hadn’t touched it.

He looked down at his trapped wrist. The hand that was wrapped around it was the webbed one, gleaming with faint iridescence in the kitchen’s light. The skin felt human, though, and right against his. Marling stars, it felt calming, as if it was slowing his pulse down by pressing against it.
Not trapped. Protected. Kept from doing what he could see now would be wrong.

“You caught my hand before I could draw,” he muttered. “Never had someone do that, ’cept for one of Xia’s men and he’s a felinoid and a martial arts champion, so he’s faster than a fold-drive when he wants to be. And we were just sparring so I wasn’t quick as I get when…when I’m listening to the horrors.”

She took a deep breath and to his shock, smiled warmly. “My hand caught your hand. The thinking parts of my brain had nothing to do with it. I’ve made myself forget most of what the Seera did to me, or ignore it, but when I’m threatened, or someone else is, it comes back.”

“You didn’t hurt me. You could have.” The knife had started out on the counter. If she could move that fast, she could have grabbed it. For all he knew, she could have done some serious damage unarmed.
“I could have. I chose not to, because I knew deep down you didn’t want to harm me. I’d just moved in too quickly and startled you. Am I right?”

He nodded. “The horrors started up, and they were right convincing. I might have hurt you if you weren’t Seera-fast like me. If I’d hurt you, I’d have come to my senses and wouldn’t want to live with myself. Then I’d remember I’d have to live with myself because every marling time I’ve tried to end it, the Seera bits take over and stop me. So thank you.”

Her grip shifted. Suddenly, instead of grasping his wrist, controlling it, Aleema was holding his hand.
He wanted to pull away.

Stars, he wanted to pick up the kitchen knife and hack his hand off to get it out of the weird, webbed grip.

But when her human hand closed over his other one, dark and warm and steady, he wanted to stay there forever. Wanted to keep looking at the lines of her face and the light in black eyes that he’d thought of as lightless. He’d been wrong about that, though. He suspected that what he was seeing in them was the capital-L Light that Gan talked about.

The horrors and those other instincts, the ones that sometimes made sense, had both fallen silent. All Buck had left to fall back on was a man’s judgment.

He judged that maybe if she could forgive him for trying to attack him, he could forgive her for wearing her Seera scars, the marks of why she wasn’t ever going to be quite easy in herself or comfortable for other folks to be around, on the outside of her skin instead of inside like he mostly did.

Fact was, now that he’d put the right words on it, something he never found easy to do and especially not when the horrors and the Seera bits ganged up on his brain, that was a damn fool thing to have to forgive. Wasn’t like she’d gone out of her way to have her body fucked up to serve her criminal intent better, like Nitari Belesku had. She was a victim like he was, only he’d venture she’d found better ways to deal with it.

The other fact was, her hands felt good clasped to his. Even though he could feel the webs on the left one, could tell it wasn’t a standard-issue human hand, it was still warm. Still felt both strong, like he’d expect from a big, competent, handsome woman like Aleema, and soft, like she used something feminine and sweet-smelling to keep the skin smooth as possible despite the hint of scaling. And the hand that was purely human felt better than that first warming hit of whiskey coursing through his veins. Just from her touch, he felt a shine worthy of a few good glasses of booze, drunk down fast. 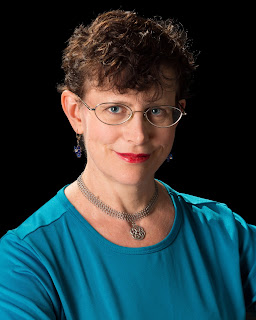 Author Bio: Teresa Noelle Roberts started writing stories in kindergarten and she hasn’t stopped yet. A prolific author of short erotica, she’s also a published poet and fantasy writer—but sexy science fiction romances, BDSM-spiced contemporaries, and hot paranormals, and have become her favorites.
Teresa is a crunchy granola girl who enjoys belly dance, yoga, cooking, hiking, playing in the ocean, and growing more vegetables than she and her husband can possibly eat. She’d enjoy sleeping too. She thinks. But it takes so much time!
She shares her home in southern Massachusetts with her husband, a Leo in law enforcement, and three cats. She and her husband often plan vacations around food, history, and/or proximity to water.