Titan: What we know now

system. This video uses actual images taken by the probe during its two-and-a-half hour fall under its parachutes.
ESA's Huygens probe made its descent to the surface of Saturn's hazy moon, Titan. Carried to Saturn by NASA's Cassini spacecraft, Huygens made the most distant landing ever on another world, and the only landing on a body in the outer solar


"The Huygens descent and landing represented a major breakthrough in our exploration of Titan as well as the first soft landing on an outer-planet moon. It completely changed our understanding of this haze-covered ocean world."-- Linda Spilker, Cassini project scientist at NASA's Jet Propulsion Laboratory, Pasadena, California

"The Huygens images were everything our images from orbit were not. Instead of hazy, sinuous features that we could only guess were streams and drainage channels, here was incontrovertible evidence that at some point in Titan's history -- and perhaps even now -- there were flowing liquid hydrocarbons on the surface. Huygens' images became a Rosetta stone for helping us interpret our subsequent findings on Titan."-- Carolyn Porco, Cassini imaging team lead at Space Science Institute, Boulder, Colorado

"Cassini and Huygens have shown us that Titan is an amazing world with a landscape that mimics Earth in many ways. During its descent, the Huygens probe captured views that demonstrated an entirely new dimension to that comparison and highlights that there is so much more we have yet to discover. For me, Huygens has emphasized why it is so important that we continue to explore Titan."-- Alex Hayes, a Cassini scientist at Cornell University, Ithaca, New York

"Twelve years ago, a small probe touched down on an orangish, alien world in the outer solar system, marking humankind's most distant landing to date. Studying Titan helps us tease out the potential of habitability of this tiny world and better understand the chemistry of the early Earth."-- Jim Green, director of planetary science at NASA Headquarters, Washington 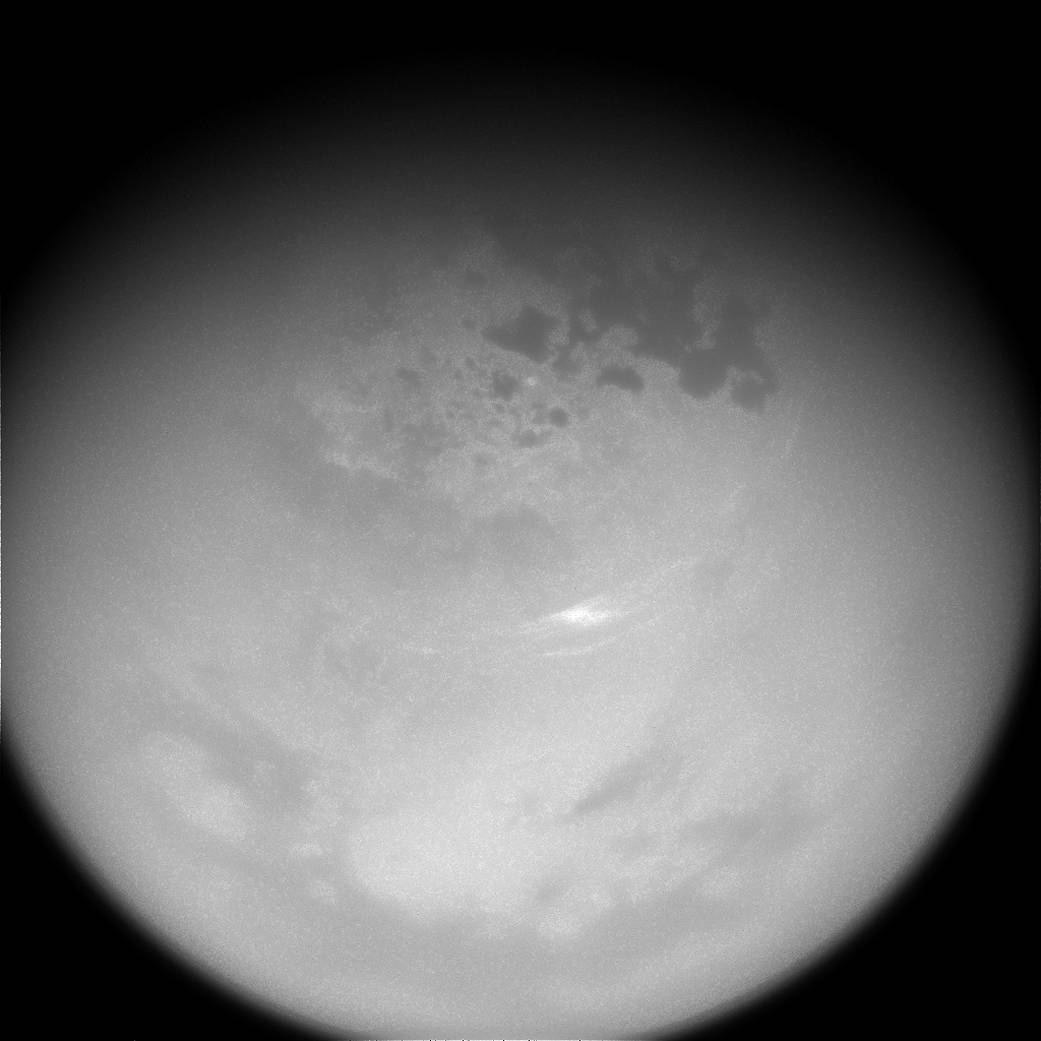 Floating high above the hydrocarbon lakes, wispy clouds have finally started to return to Titan's northern latitudes. Clouds like these disappeared from Titan's (3,200 miles or 5,150 kilometers across) northern reaches for several years (from about 2010 to 2014). Now they have returned, but in far smaller numbers than expected. Since clouds can quickly appear and disappear, Cassini scientists regularly monitor the large moon, in the hopes of observing cloud activity. They are especially interested in comparing these observations to predictions of how cloud cover should change with Saturn’s seasons. Titan’s clear skies are not what researchers expected.

Cassini's "T120" and "T121" flybys of Titan, on June 7 and July 25, 2016, respectively, provided views of high northern latitudes over extended time periods -- more than 24 hours during both flybys. Intriguingly, the ISS and VIMS observations appear strikingly different from each other. In the ISS observations (monochrome image at top), surface features are easily identifiable and only a few small, isolated clouds were detected. In contrast, the VIMS observations (color image at bottom) suggest widespread cloud cover during both flybys. The observations were made over the same time period, so differences in illumination geometry or changes in the clouds themselves are unlikely to be the cause for the apparent discrepancy: VIMS shows persistent atmospheric features over the entire observation period and ISS consistently detects surface features with just a few localized clouds.

The answer to what could be causing the discrepancy appears to lie with Titan's hazy atmosphere, which is much easier to see through at the longer infrared wavelengths that VIMS is sensitive to (up to 5 microns) than at the shorter, near-infrared wavelength used by ISS to image Titan's surface and lower atmosphere (0.94 microns). High, thin cirrus clouds that are optically thicker than the atmospheric haze at longer wavelengths, but optically thinner than the haze at the shorter wavelength of the ISS observations, could be detected by VIMS and simultaneously lost in the haze to ISS -- similar to trying to see a thin cloud layer on a hazy day on Earth. This phenomenon has not been seen again since July 2016, but Cassini has several more opportunities to observe Titan over the last months of the mission in 2017, and scientists will be watching to see if and how the weather changes. 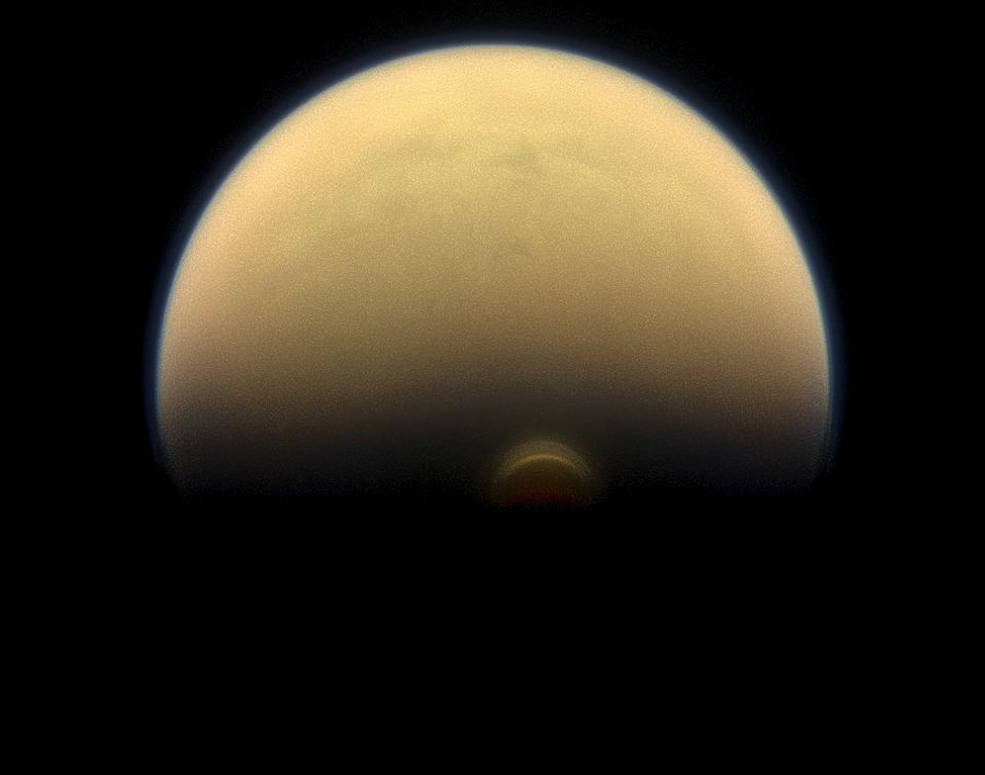 As southern winter solstice approaches in the Saturn system, NASA's Cassini spacecraft has been revealing dramatic seasonal changes in the atmospheric temperature and composition of Saturn's largest moon, Titan.


Winter is taking a grip on Titan's southern hemisphere, and a strong, whirling atmospheric circulation pattern -- a vortex -- has developed in the upper atmosphere over the south pole. Cassini has observed that this vortex is enriched in trace gases -- gases that are otherwise quite rare in Titan's atmosphere. Cassini's observations show a reversal in the atmosphere above Titan's poles since the spacecraft arrived at Saturn in 2004, when similar features were seen in the northern hemisphere. 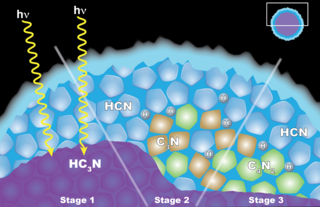 Scientists from NASA’s Cassini mission think the appearance of a cloud of dicyanoacetylene (C4N2) ice in Titan’s stratosphere is explained by “solid-state” chemistry taking place inside ice particles. The particles have an inner layer of cyanoacetylene (HC3N) ice coated with an outer layer of hydrogen cyanide (HCN) ice. (Left) When a photon of light penetrates the outer shell, it can interact with the HC3N, producing C3N and H. (Center) The C3N then reacts with HCN to yield (right) C4N2 and H. Another reaction that also yields C4N2 ice and H also is possible, but less likely. "The compositions of the polar stratospheres of Titan and Earth could not differ more," said Michael Flasar, CIRS principal investigator at Goddard. "It is amazing to see how well the underlying physics of both atmospheres has led to analogous cloud chemistry."

And why have I fixated on Titan? 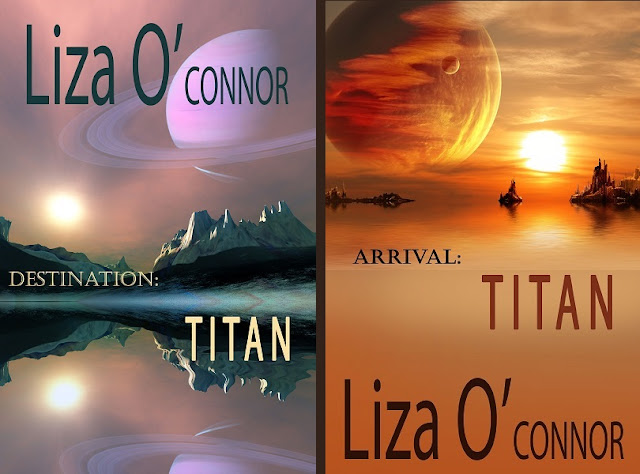