Today, I have over USA Today Bestselling Author, SM Schmitz to share her latest release, Book 2 of the Genesis Project. 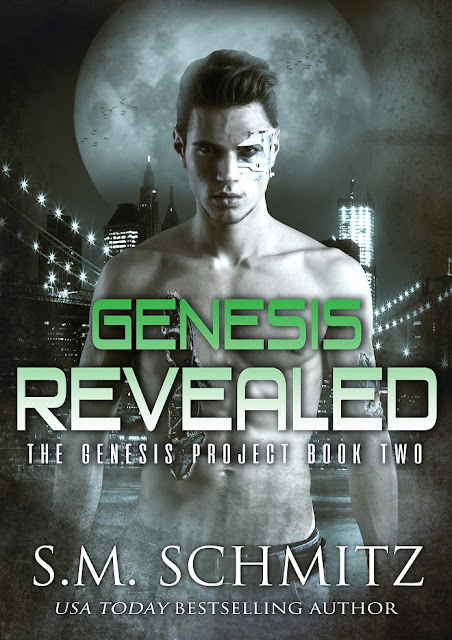 Blurb for Genesis Revealed, book two of The Genesis Project

When Drake and Cade arrive in Somalia to retrieve the stolen cargo, Drake is faced with a horrifying realization: The Genesis Project is still with him. He’d never freed himself, after all.

Back in the hands of Dr. Mike Parker, Drake’s fate takes a sinister turn. But the more he learns about his past, the more he’s revealed to be the monster he fears, and he will have to find his way back from losing what is most important to him: His own identity.

Another bullet shattered the driver’s side window so Cade flinched as the shards of glass blew into his face but just slipped lower on the seat and shifted the truck into third gear as he sped up. The engine protested so I felt the need to point out he’d blow the transmission if he didn’t shift into a higher gear.

I also felt the need to point out his face was bleeding.

“Drake, I swear to God, if you don’t shut up, I’ll shoot you myself,” he warned.

“Don’t think that’s a smart move,” I told him. “Then you’re stuck in East Africa by yourself trying to track down a potentially crazy man’s illegal shipment of illegal weapons from smugglers who probably constitute their own small army.”

Cade shot me a hard look and snapped, “Get off the floor and shoot back, dumbass.”

I pulled myself up and reminded him, “You’re the one who told me to get down there.”

I wasn’t exactly sure how I was supposed to shoot at the vehicles following us since there was no rear window. Parker had thought he’d designed my brain to function like a computer’s—input codes and commands and the machine carries them out—but he’d failed with his design just as he’d failed in so many other areas. My brain worked just like anyone else’s when he wasn’t forcing directives into it that I was compelled to obey.

And with no directives, I felt completely lost and useless to my only friend.

I licked my lips and decided there were worse ideas than just sticking my head out of a window that had been shot out… like lying to the only woman I’d ever loved and dragging her into my irretrievably damaged world.

As soon as I leaned out the broken window, Cade started yelling at me. “Drake! Are you out of your goddamn mind?”

“Probably,” I yelled back. I fired at the only car I could see through the clouds of dirt our tires were creating. I heard the splintering of their windshield and ducked back inside before the buzzing of more bullets sailed past my door.

Cade shot me another exasperated look and warned me, “Do that again, and I really will kill you myself.”

“You told me to shoot back!”

Cade groaned and swiped his sleeve across the left side of his face where blood still trickled from the abrasions the glass had caused. “Just give me a few minutes and let me think.”

I waited about twenty seconds before pointing out, “Your original idea was to follow a caravan. I think you’ve blown our cover.”

I lifted a shoulder at him and waited only ten second this time. “Even if you lose the guys following us, we’re just going to drive around Somalia aimlessly now. This was a terrible plan.”

Cade reached up to the CB radio’s microphone and pulled it down then handed it to me. “So I lied. I never intended to follow anyone because I doubt they travel in caravans. We’re going to lose the bastards trying to kill us then wait for whomever is expecting this shipment to contact us. They’ll come to us hoping they can get their cargo back.”

I stared stupidly at the microphone in my hand because I was certain now this had to be the worst idea Cade had ever come up with. And he’d known if he told me the truth, I would have refused to go along with it.

“Do you have another secret plan to get away from the assholes shooting at us?” I asked.

“Actually, I do,” Cade replied. “Put your seatbelt on.”

I groaned but yanked on the belt and clicked it into place. I had a horrible suspicion as to what his other secret plan would be.

Cade slammed on the brakes and my chest smashed into the belt as it locked. The impact took my breath away so I couldn’t even curse at him. Behind us, I could hear the tires spinning in the dirt as they attempted to maneuver away from the van that was either carrying dead marine life or an entire arsenal of stolen weapons.

If we had a van filled with dead fish, I was going to be seriously pissed at Cade for the rest of my life—even if the rest of my life was only three minutes because the guys who’d been following us were armed with more than a practically useless Beretta.

I yanked the belt off and slid down from the seat again. The dirt and gravel on the service road we’d taken couldn’t hide the footsteps of the men as they approached our cab. Cade had dropped down to the floorboard beneath the steering wheel, his elbows resting on the seat as he focused on the shattered window. He held his own Beretta ready to shoot the first person to appear in his view.

The footsteps on my side of the van slowed down. Even though the chips in my brain weren’t currently directing my thoughts and actions, I held onto the programming Parker had given me over the years, including the ability to gauge distance by sound.

Someone was four feet outside the passenger window.

My chest ached from slamming into the seatbelt, but I leaned against the passenger seat anyway so I could wait for a visual on the man outside. His steps became shuffles as he inched toward me.

And then they stopped.

A voice called out to me in perfect, unaccented English, “Drake, did you really think you’d be able to escape us?”

I inhaled sharply, which made that biting pain in my chest spread to my lungs. But I’d left nothing behind me in Virginia.

The Genesis Project had been with me the entire time.

Book two was as great as book one.  Fresh and riveting.
The ending leaves in a bit of a cliffhanger, but it had enough of a landing spot so that I didn’t fall off in outrage.


A solid five stars. Can’t wait to read the next book.

S.M. Schmitz is a USA Today Bestselling Author, and has an M.A. in modern European history. She is a former world history instructor who now writes novels filled with fantasy and, sometimes, aliens.

Her novels are infused with the same humorous sarcasm that she employed frequently in the classroom, and as a native of Louisiana, she sets many of her scenes here. Like Dietrich in Resurrected, she is also convinced Louisiana has been cursed with mosquitoes much like Biblical Egypt with its locusts.

You can receive her post-apocalyptic novella, The Scavengers, for free by signing up for her mailing list.
Please visit her website, smschmitz.com, for more information about all of her science fiction and mythic fiction titles or follow her on Amazon or BookBub.