Lifting the shadows on cyberpunk

Hi everyone, you may remember when I was here a couple of months ago talking about Firefly, Space Opera, and how it influenced my story Hearts and Minds. This time around, I want to talk about my other great science fiction love, and why Cyberpunk Romance is totally a thing.

Cyberpunk first showed up in the 80s as a perfectly timed amalgamation of futurism, the budding hacker mentality, and trans-humanism. The ideas of making a better body and the merging of mind and machine were matched against a future that only the excesses of the “Greed is Good” 80s could envision. Giant multinational corporations had eclipsed local governments, and fought their own wars with their private armies. Glittering chrome and bright neon defined the city streets, all shot through the rainsoaked, shadowed lens of the postwar noir aesthetic.

Stories like Neuromancer, Mona Lisa Overdrive, and Mirrorshades served as my gateway drug, and hooked me on this dangerous new future that felt so much closer than glittering spaceships and FTL travel. George Alec Effinger’s When Gravity Fails transported me to new places my quiet suburban life hadn’t before imagined. And films like Blade Runner firmly cemented the images of cyberpunk in my brain.

All of these things were part and parcel of what I wanted to recapture when I decided to create my first series setting. I updated some of the ideas, to match changing technology, and introduced a singular shadowy enemy – Corporate Services. The clearing house organization that hired and employed mercenaries to keep the the corporation’s hands clean. Most importantly, I wanted the heroes and heroines of my stories to reflect my love of cyberpunk’s "high-tech lowlifes" and my firm belief that everyone, no matter how broken they feel, deserves a happy ending.

It was also through the characters that I leaned hard into the genre’s "punk" aesthetic – these were not tales of dashing, billionaire playboys, except tangentially. I needed characters barely getting by in the cracks of a society that was at best indifferent to them. Mercenaries, thieves, boxers, and prostitutes. People who had little power other than what they could grab for themselves.

Despite having bionic arms and cybernetic eyes, despite being hackers and bodyguards, I wanted characters that didn’t just deserve a happily ever after; they earned it. Each of them carries their wounds – some more visibly than others. There’s no cybernetic upgrade to fix what’s wrong; only their willingness to give and receive love can heal them.

For a limited time, the first book in the series is on sale for $0.99 – but I’m also giving away a copy to one lucky person who posts in the comments section below. Stop in and talk about your favorite cyberpunk stories, or what cybernetic enhancements you might want for yourself. I’ll look forward to seeing your replies! 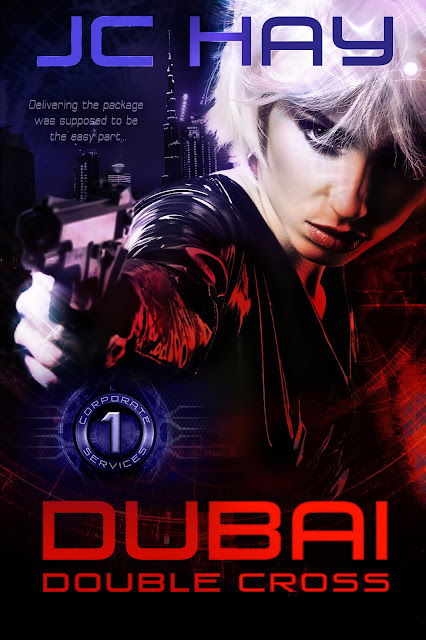 Back Cover:
Elise is looking for an exit. Too many years as a top-talent thief in the digital shadows have whittled away her patience and her humanity. She’s not looking for complications, but with one more job, she’ll finally have enough money to leave the life for good.

Na’im does what he must to survive. Whether it’s selling his body to the corporate glitterati, or going on the run when things get bad – but even a survivor can be caught off guard, and his boss’s murder has left him with no one to trust but a thief with her own agenda.

Together, they’re on the run trying to figure out who framed them both and stay one step ahead of the murderer who’s close behind. Trust is a rare commodity for accidental lovers, but in a dark future where everything can be upgraded and emotions can be programmed, sometimes all that can keep you human is your heart.

Excerpt from Dubai Double-Cross:
Elise sighed. So much for this being a milk run. Just once I want to have a mission go one-hundred percent according to plan. She started to holster her pistol when a movement from the bathroom caught her attention. She rolled behind the bed and brought the weapon up, the green dot highlighting the center of a well-sculpted, hairless chest.

Damn, money and taste run hand in hand. Elise peeled her eyes away from the man’s gorgeous frame. He had the perfect complexion that came with wealth, but his well-defined abs and power-laden chest were natural. Nothing vat-grown about his physique at all, Elise noted with appreciation. Not that I have time to care about such things right now.

She zeroed the pistol on his head as she stood. “Step away from the bed. Who are you?”

Fear, grief and rage chased each other across the man’s face. “What did she ever do to you?”

Elise wiggled her pistol to call his attention to it. “Gun. I ask the questions. Let’s try again. Who are you?”

The euphemism made sense in pseudo-conservative Dubai, where the appearance of propriety needed to be maintained in spite of what happened behind closed doors. Still, she couldn’t resist wondering what enhancements he had beneath the surface—stamina, heightened sensitivity, almost certainly a skillset for a wide array of bedroom activities. It depended on how Zaahir’s tastes in the bedroom ran. She glanced at his temple and made out the port covers for an extensive cortical unit. “Na’im, step away from the bed.” When he complied, she continued. “Miss Zaahir was dead when I entered the room. With you being in the bathroom at the same time, you can understand why I am disinclined to trust you. So you stay still, and we’ll have a little talk.”

Despite herself, Elise let her vision dip to take in the full show. Na’im didn’t so much as blink at the examination, leaning against the wall next to the bathroom door. He pointed at his hips. “May I at least grab a towel?” 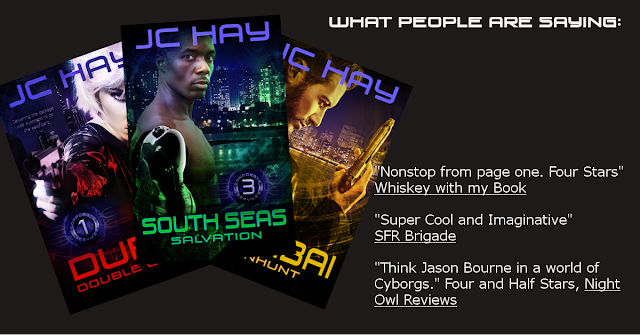 About JC Hay
JC Hay writes romantic science fiction and space opera, because the coolest gadgets in the world are useless without someone to share them.

In addition to Romance Writers of America, he is also a proud member of the SFR Brigade (for Science Fiction Romance), the Fantasy, Futuristic, and Paranormal Romance chapter, and a proud member of RWA’s PAN (the published authors network).

In addition to piracy in high space, JC writes the Corporate Services series, a set of connected cyberpunk romances set eighty years in our future where the limits of humanity are being stretched and tested.