Thanks for having me as a repeat guest! Always love being here…
I’m still in edits on the new book (coming SOON, I promise!) so I’m going to talk about the older title I currently have on sale – Mission to Mahjundar. When I write, I like to have an element of mysticism and fantasy present, even in my ‘hardest’ scifi tales. I personally love the idea that science doesn’t answer all questions and that many things are possible, especially on the far flung worlds of the galaxy. I enjoy having my matter-of-fact Special Forces heroes encounter inexplicable things that can’t be affected or deterred with blaster fire.
The planet Mahjundar is full of elements hovering just out of sight, fantastical forces and powers at work, some benevolent and others decidedly not. Major Mike Varone, the hero of the tale, has arrived to search for survivors of a spaceship crash in the mountains. Pretty straightforward stuff…but noooo, he gets drafted into escorting the blind Princess Shalira to her arranged marriage and his own mission goes off the rails right away.  The first stop on the journey is an abandoned temple, where the lady has to retrieve the key to her mother’s tomb, which involves petitioning the old pantheon of gods for assistance. The next stop is the mother’s tomb, where even more eerie events occur (and Mike was pretty shook up from the morning ceremony in the temple). I gave myself goosebumps when I wrote that scene!
I won’t do spoilers – too much – but later in the book they end up in the mountains and encounter a civilization worshipping an ancient, blood thirsty deity who bears a strange resemblance to one of Mike’s high tech enemies out in the stars…for this character I drew on my own encounter with a truly terrifying Aztec god (in statue form only, thank goodness) in a Mexico City museum. The overwhelming horror and ‘wrongness’ of the statue (to my eyes) left an indelible impression on me and was a perfect wellspring for the emotions I wanted Mahjundar’s equivalent to evoke in Mike, Shalira and the readers.
On a lighter note, I also had fun creating a fairy tale for the planet’s backstory, about the Princess of Shadows, and how she was eventually rescued by her Prince Charming. My heroine Shalira is the modern day embodiment of that fable.
So this book combines many of my favorite elements and I was honored that it received an SFR Galaxy Award in 2015. 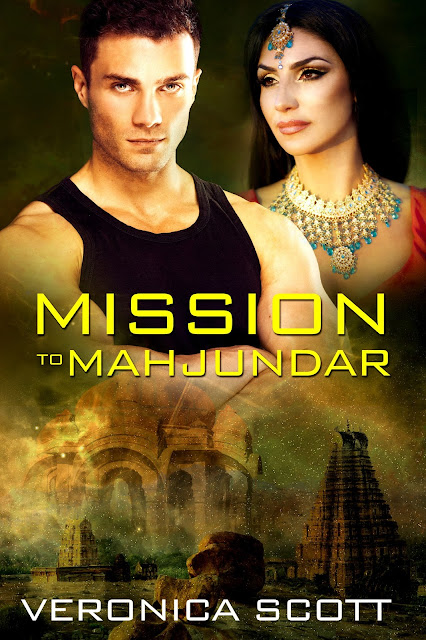 The story:
An attempted assassination left Princess Shalira blind as a child and, now that she’s of marriageable age, her prospects are not good because of her disability. She’s resigned herself to an arranged marriage rather than face life under the thumb of her cold stepmother. But then she meets Mike Varone, a Sectors Special Forces officer sent to Mahjundar by the intergalactic government to retrieve a ship lost in her planet’s mountains. After Mike saves Shalira from another assassination attempt, she arranges for him to escort her across the planet to her future husband. She’s already falling hard for the deadly offworlder and knows she should deny herself the temptation he represents, but taking Mike along to protect her is the only way she’ll live long enough to escape her ruthless stepmother.
Mike, for his part, resists his growing attraction to the princess; he has a mission on this planet and rescuing the vulnerable but brave princess isn’t it. No matter how much he wishes it could be.
But what should have been an easy trek through Mahjundar’s peaceful lands swiftly turns into an ambush with danger around every turn. Shalira’s marriage begins to seem less like an arranged union and more like yet another planned assassination. The more they work together to survive, the harder it becomes to stop themselves from falling in love. Caught in a race against time, can they escape the hostile forces hunting them and make it off the planet? 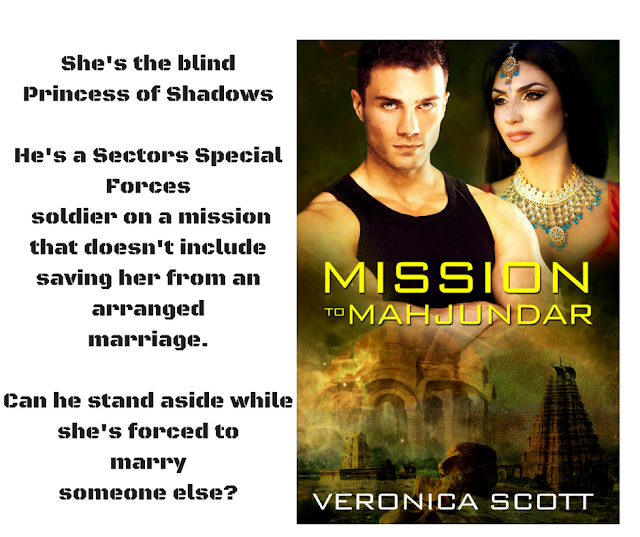 The Excerpt
This scene occurs late in the book, when Shalira is beginning to recover her eyesight. She and Mike’s teammate, Johnny Danver, are on their way to rescue Mike, who’s been captured by the local high priest. (I talked about Johnny, who got his own book later, in my last visit to Liza!) But first they have no choice but to walk through the inner sanctum of the god’s temple.
The evil emanating from the room ahead was already taking her breath away. The sensations were much the same as when Ishtananga had led her past the statue, but now she was more nervous because she and Johnny were vulnerable, so much depending on their success in finding and rescuing Mike and Saium. She closed her eyes tight as they crossed the threshold, knowing she could make her way perfectly well without seeing the horror they were walking past.
She thought she heard a voice, whispering just below the threshold of her hearing, urging her to open her eyes and behold the glory of Tlazomiccuhtli. Horrified, she let out a little gasp and bit her lip, fighting the effects of the mental assault. The temptation to peek, a little bit, at the effigy they were passing became more than an irritation, then a compulsion she had to actively combat. She realized Johnny was barely walking.
“What’s the matter?” she whispered.
There was no answer, and he stopped.
“Johnny.” She shook his shoulder, horrified to find his hand was now at his side, blaster pointed at the floor. With her abnormally keen hearing, she was positive no one else had entered the room. Opening her eyes, she tried again to jar her companion into speech or movement. Following the direction of his gaze, she beheld Tlazomiccuhtli for herself and fell to her knees, retching at the sheer horror. Arms crossed over her gut, Shalira raised her head to take another cautious glance in the torchlight.
After a single, horrified glance, Shalira forced herself to look away from Tlazomiccuhtli, shaking her head, trying to clear the dizziness.
She stood, checking on Johnny who seemed locked into position, literally transfixed, either by the dark powers Tlazomiccuhtli wielded or his own memories, or both. Shalira glanced at her hands and realized she was projecting pale green light from every pore. Startled, she stepped back, losing contact with the sergeant. Instinctively she clutched her amulet and found it warm to her touch. Pavmiraia must be protecting me, as much as she can in this horrible place. Frantic with the need to move, Shalira tugged harder on the paralyzed Johnny but couldn’t rouse him from the trance or traumatic state he was in. Unblinking, he stared straight at the effigy, his body rigid.
Dizziness was overtaking her senses, whether from the smoke or the influence of Tlazomiccuhtli she wasn’t sure. Reaching a decision, she closed her eyes and took off her amulet, which she looped over Johnny’s head. The end of the chain slipped from her fingers as if pulled and she heard the locket clatter onto the stone floor. Kneeling, Shalira swept the floor with her hands. Frustrated, she risked opening one eye and immediately felt the pull to turn toward Tlazomiccuhtli and worship him. Fortunately she caught a glimpse of her locket, shining with the pale green glow, half-hidden under a table supporting a cage of hissing snakes. Forcing herself to move away from the statue, praying the snakes couldn’t escape the enclosure, she crawled to retrieve the locket and brought it back to Johnny. As soon as she fastened the chain around his neck, he jerked and blinked, rubbing his forehead.
“Can you walk now?” Shalira asked, closing her eyes against the hypnotic pull of the god, but not letting go of his sleeve. “Close your eyes and lean on me, soldier.”
He mumbled something in Basic that she took for agreement.
She led him out of the chamber, counting the steps and listening to the echoes, although it was hard to hear over the voices in her head, calling her to return to Tlazomiccuhtli’s embrace. 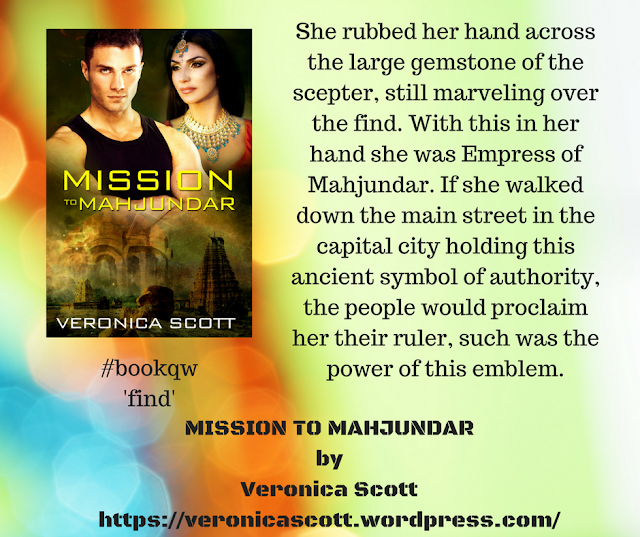 Author Bio:
Best Selling Science Fiction & Paranormal Romance author and “SciFi Encounters” columnist for the USA Today Happily Ever After blog, Veronica Scott grew up in a house with a library as its heart. Dad loved science fiction, Mom loved ancient history and Veronica thought there needed to be more romance in everything. When she ran out of books to read, she started writing her own stories.
Seven time winner of the SFR Galaxy Award, as well as a National Excellence in Romance Fiction Award, Veronica is also the proud recipient of a NASA Exceptional Service Medal relating to her former day job, not her romances! She recently was honored to read the part of Star Trek Crew Member in the audiobook production of Harlan Ellison’s “City On the Edge of Forever.”
Blog: https://veronicascott.wordpress.com/
Twitter:  https://twitter.com/vscotttheauthor
Facebook:  https://www.facebook.com/pages/Veronica-Scott/177217415659637?ref=hl
Amazon Author Page:
http://www.amazon.com/Veronica-Scott/e/B006CUCJ92/ref=dp_byline_cont_ebooks_1