K Reedwood shares how 'goobers' got in her latest book.

There’s Goobers in my Galaxy.

What’s that, you say? You’ve a what in your what?

Well, I’ll tell ya. It all comes down to goats. And world building. And naming alien races in a scifi-fantasy-adventure story. And having an ultra-cool writing partner that listens to your crazy ideas and says, “Yeah, ok.”

When Chris Heinicke and I thought up the idea for our Legacy Hunter series, we knew we wanted it to be a story that was fun and entertaining. The kind of story that had an epic hero like Indiana Jones, and took the reader to far off worlds populated by alien races with seemingly good intentions but more often than not perilous ones. And romance, yeah we wanted that in there too, because every Han needs his Leia to save him from being frozen in Carbonite now and then.
But back to those Goobers.

Chris: "So what are we going to call these aliens?"

Chris: "So maybe it's a mountain planet. And they're like mountain goats. So it's kind of rocky."

Me: *Googles the name for goat in other languages* "Goat is capra in Latin. What about Caprnaites?"

Chris: "How about Planet Ramstein? Nothing's really grabbing me."

Me: "You know, they don't have Australian on Google translate? I think they should have it. There's lots of Aussie terms for things that I have no clue about. Like billabong. What the heck is a billabong?"

Also me: "And Maccas is McDonalds."

Me: "You guys love to shorten words."

Me: *thinking* "So what if we take a couple of words and mash them together? Like Gohbar and creig. And mix them around a bit so it's not exactly the same. Gho'barchreig. Only it's pronounced Goober Crag by humans because they don't speak the goat people language and that's the closest translation?"

Me: "Yeah, and humans would refer to the goat people as Goobers, because you know how people like to mock names for things."

And that's how Goobers ended up being in my galaxy.

Thanks so much for having us on your blog today! The first book in the Legacy Hunter series, Queen Killer, releases on July 29th 2017 and is on special for 99Cents until August 7th. It can be purchased at all major e-book retailers. 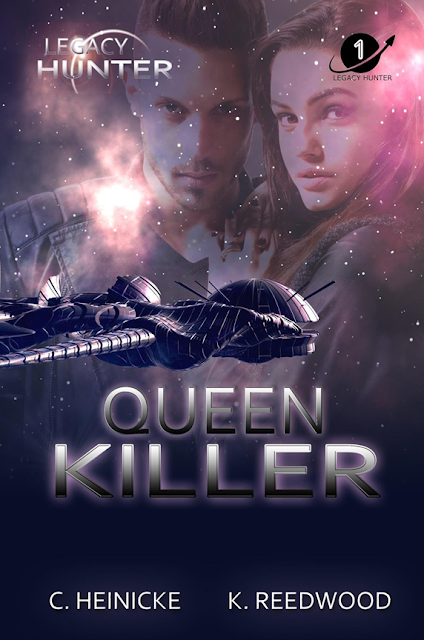 Blurb:
Stardrives.
Powerful, beautiful, bio-mimetic energy in its purest form. A benevolent gift meant to launch humanity into a new age of space travel.  They were the hope for the future. The key to the next stage in human discovery.
But every gift has its price.


Nearly a thousand years after Earth took its place in the network of galactic commerce, the planet is depleted of resources and on the edge of collapse. Can stardrive technology bring the Earth back to life? Adventurer Axel Ryan is betting his life that it can. But there aren't any stardrives left to be found on Earth, and ships capable of interstellar travel are hard to come by. His only choice is to enlist the aid of mercenary pirates to steal one. With the stakes high, and the future of Earth on the line, does it matter he'll have to betray the love of his life?


Keep your friends close and your enemies closer has always been Element Cruz's motto. And it couldn’t be more true with Axel Ryan. Drugged, abandoned, and her ship stolen, she's more than ready to let the price on his head kill him. Except Axel holds the key to saving humanity. And if there's one thing Ellie can't refuse, it's the chance to win.

Author Bios
Chris Heinicke
Although working as a baker for many years, writing has been a passion for Chris for some time, starting in high school and reigniting again in 2006, when he first got the inspiration to begin writing 'The Man In Black.'

After completing that project eight years later, he took part in NaNoWriMo in November 2014, culminating into a project named 5PM. Deciding to self-publish, 5PM came out in February 2015, and then The Man In Black in August.

2016 saw the release of 7PM, and in that same year, his writing path met with that of Canadian author Kate Reedwood. A mutual respect of each other's work ignited an interest in working together, creating the Legacy Hunter series, the first of which to come out in July 2017.
Apart from writing, Chris enjoys travelling, reading, watching movies and all things geeky. He resides in Coffs Harbour with his wife and three children.


Chris will be at Nexus Con on July 29 celebrating the release of the first book in his Legacy Hunter series.
www.chrisheinickewriter.com

Kate Reedwood
Kate Reedwood, also know as Felicity Kates, is a mild-mannered manager by day. At night, she trades in her high heels for bunny slippers and lets her imagination run wild.

A trained artist and writer, Kate enjoys writing stories that combine humor with strong characters who know what they want and aren't afraid to go get it. Every story is an emotional journey where the characters must struggle to find their happily ever after. But they do always reach it in the end, no matter the time or place in the universe.

She lives off of coffee and dreams and enjoys going for walks along the shores of Lake Ontario, taking pictures of whatever catches her eye. A romantic at heart, she loves to snuggle under a blanket with a good book to warm up the cold Canadian winters.

When not dreaming up new worlds and books to write with Australian author Chris Heinicke, she can most often be found enjoying the quiet company of her husband and son.
www.Felicitykatesauthor.com
Social Media Links
WEB Page:
https://www.legacyhunter.space/
www.chrisheinickewriter.com
www.felicitykatesauthor.com