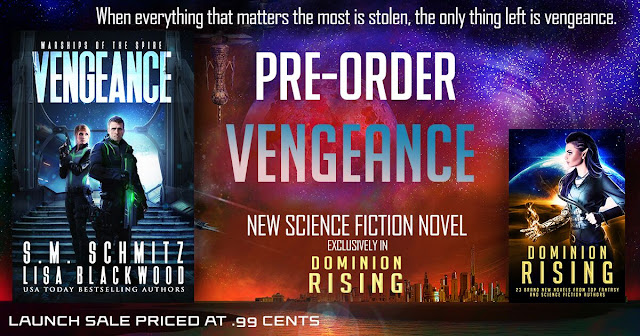 In 2016, bestselling urban fantasy author, Lisa Blackwood, and I began talking about co-writing a sci-fi romance novel that could potentially become a series with as many books in it as we wanted to write since each would follow a different warship. The original idea for Vengeance, the first book in the Warships of the Spire series, follows the story of an artificial intelligence whose sentience controls not only the warship but a number of sentinels and drones—including a partly organic humanoid cyborg. Ven’s story, while definitely be filled with the action common to space operas, is a familiar one to romance readers as well, because it’s also a novel about love and loss. And even AIs like Ven can fall in love.

When we joined the Dominion Rising project in the fall of 2016, we decided to write and launch Vengeance as part of this exciting box set. All twenty-three novels are new and written exclusively for Dominion Rising, and we’ve been honored to work with some of the most talented indie authors in science fiction and fantasy. Lisa and I also discovered that we work well together because we have such different writing styles and strengths—she brought high intensity action sequences to our story, and I focused on relatable dialogue and emotional connections. Ultimately, we hope we’ve created a story that brings all of the elements readers love from space opera and sci-fi romance to the pages of Vengeance.

The best part? We’re already planning book two. Citadel will be launching in the Spring of 2018, so grab your copy of Dominion Rising for the launch price of $0.99, and ward off that dreaded book hangover…because with twenty-three novels, there’s plenty to fall in love with. And you might just find your next boyfriend in the pages of Vengeance, book one of the new Warships of the Spire series. 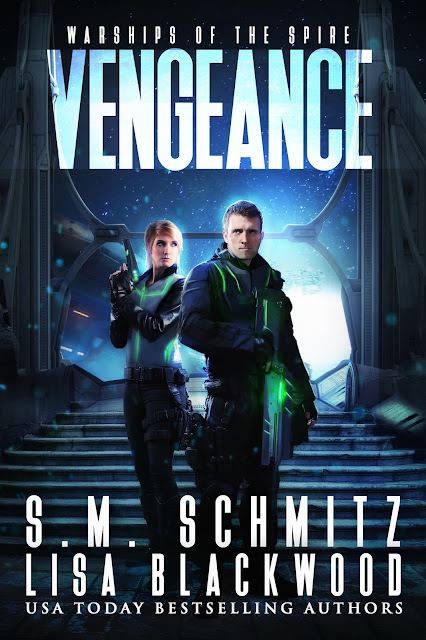 Purchase Dominion Rising at any of these retailers:

Learn more about all of S.M. Schmitz’s science fiction and fantasy titles at www.smschmitz.com.

Aboard his warship, Commander Lisk barked, “Vengeance, report!”
Renee had just boarded one of his transports so she could reach the warship currently engaged in battle with two determined opponents. Warhawk and Wolverine, the Nuallan warships, were busy with their own battles. Vengeance was particularly concerned about Warhawk. The smaller battlecruiser had sustained substantial damage to seventy-nine percent of his hull with breaches in sixteen locations. His port side engine had been completely destroyed, and his shields were almost depleted.
Vengeance was faring better, but his own opponents were keeping him hemmed in, unable to help Warhawk without leaving the planet and evacuation ships more vulnerable than they already were.
Commander Lisk barked again, “Vengeance, report!”
“Link Renee is now safely on one of my transports, and my drone is taking a squadron of sentinels to fight the enemy units converging on the school,” Vengeance answered using the ship-wide comm.
Commander Lisk grunted in acknowledgment then shouted for more reports about what was happening on Nualla. The last enemy weapons fire had knocked out his close-range sensors so the energy webs were only displaying warnings and error reports to the crew.
“Large parts of the city and spaceport have sustained damage. The evacuation is still underway. Twenty-three ships report that they are already accelerating away from Nualla. The enemy ships show no interest in following them,” Vengeance reported.
Commander Lisk leaned forward in his chair. “For now. We’ll make sure they don’t have a chance. Have the individual fighters flank and provide escort for the—”
A blast from an enemy’s cannon penetrated Vengeance’s shields and struck his hull. The bioskin absorbed and dispersed much of the impact, but Vengeance still rocked hard to the side before thrusters matched the force.
“Sustaining rapid-fire pulse cannon damage. Port side energy admitters have failed causing the foremost shield arrays to weaken. Diverting power from all other admitters to compensate. Shields holding at twenty percent,” Vengeance told his crew. “Returning fire.”
“Vengeance, can you identify what models are attacking you?” Lisk asked, his voice tense.
“Birth stamps on hulls identify them as Basilisk, Warlock, Relentless, Danforth, Agrona, and Warhammer.”
“Look out for Warhammer,” Lisk advised. “He has energy harpoons.”
“He’s bringing them online now,” Ven replied.
“Don’t let him sink his claws into your shields,” Lisk ordered. “It’ll hamper your maneuverability too much and weaken your shields.”
“I’m aware of that,” Vengeance snapped.
Flashes of weapons fire lit up the screens, revealing glimpses of the enemy ships against the darkness of space. Two seconds after Warhammer released his harpoons, Vengeance returned fire with secondary weapons’ arrays. While Vengeance was battling Warhammer, fire from the three enemy ships made Vengeance shudder under their attack.
Enemy fire began to breach his shields where energy harpoons had latched on and diverted the shield’s resonance. As his shields continued to weaken, his hull shook under the impact. His sentinels remained upright, but the crew was getting knocked around.
They were likely to get far worse if the tide of battle didn’t swing in his favor soon. However, since he was much older than his two opponents and had been built during a time when the Spire was less peaceful, he had one weapon they lacked.
“Bringing main fusion cannon online,” Vengeance announced. Deep within his engineering section, just a few decks above his primary core, his secondary power station came online and diverted power from the rest of his extremities.
“Vengeance, no!” Lisk protested.
All over the ship, lights dimmed and screens went dark. On the bridge, the energy webs blanked out, plunging the room into darkness.
“Diverting all remaining power to main weapons’ array,” Vengeance told his crew.
“Damn it, Vengeance!” Lisk yelled. “You can’t fire on them while we’re this close!”
Vengeance knew the risks, of course, but if he didn’t do something, Nualla could be lost. And he couldn’t lose Renee or Hayley.
Vengeance’s voice drifted out of the darkness. “Main Fusion cannons at eight-five percent and climbing. Nine-five percent.” His exposed hull continued to take a battering, but he was a Neit Class warship and had been designed to take more punishment than the newer, lighter models.
“Targeting Warhammer. Firing main fusion cannons. Full strength, continuous ten second burst,” Vengeance announced.
During the initial blast, Vengeance was blinded by radiation and battle damage but within seconds, his other systems normalized, and his shields and sensors both came back online. “Assessing damage.”
Throughout the bridge, energy webs flickered back on. Their feeble glow grew stronger, weaving lights and colors together until the space battle was pictured once more. Danforth, Relentless, and Basilisk were still engaged, but Warhammer was dead, the deep wound in his hull still bleeding fluids and sparks of energy.
Warhammer’s corpse rotated slowly in space, drifting toward the planet’s surface in a decaying orbit.
“Warhammer destroyed. Radiation levels inside my hull are minimal. Scrubbing commenced where shields were insufficient,” Vengeance said as he locked on to the next target.
Lisk may have thought Ven’s decision to employ the fusion cannon was madness, but Hayley was on this planet. And if he had to, he’d destroy every last Warship of the Spire to protect her. 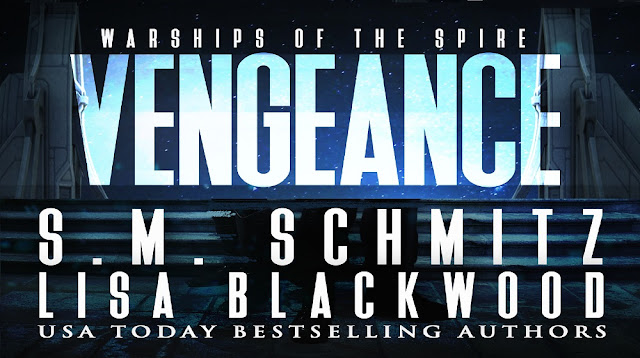