Today, I have Lindsey R. Loucks over.
She's sharing book two.
If you haven't read book 1,
you might want to start there.
Book 1 (Links further down) 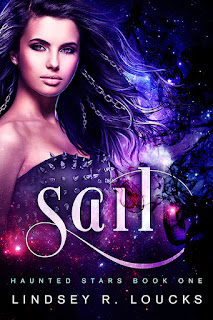 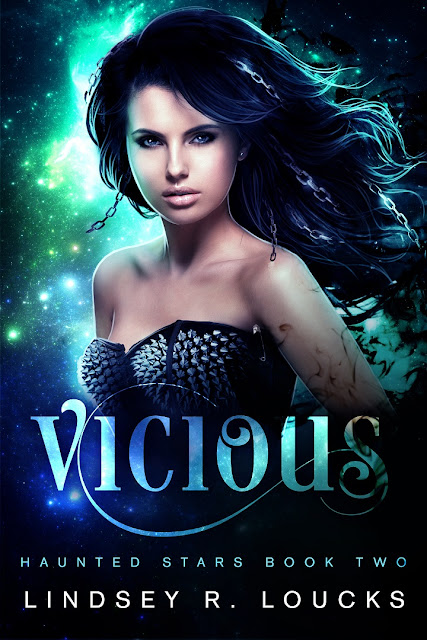 Absidy Jones, a fugitive ghost magnet on the run for two murders she didn't commit, desperately needs to warn the human race. The Saelis aliens are coming to finish a two-hundred-year-old war and decimate the rest of humanity.

No small feat for Absidy, especially since she and her spaceship’s crew are stuck in deep space.

Pasts collide on the once-haunted ship she now calls home, leaving the crew stranded with no outside communication. Murder, secrets, and betrayal lurk around every corner, more vicious than anyone thought possible.

Startling discoveries force Absidy to risk the lives of those she loves to save all humans, even as her special ghostly gift seems to be…evolving.

Forcing myself to breathe easy, I went in search of Randolph at the fruit tent. The crowd swept me along, but it was so packed that the throng jostled each other for a pocket of air. I ran into several creatures and people, not by choice, and finally smashed straight into a wall. A wall made of bricks and a black trench coat. An odd choice of clothing for a wall.

My lungs pinched together when I glanced up into a glassy pair of dark blue eyes, the centers of which appeared cracked like plastic. White starbursts webbed through the blue irises and seemed to darken the pupils into black holes. The strange eyes belonged to a giant of a man with a bald head and alabaster skin. The four men at his sides wore guns within easy reach, and white energy sizzled across their eyes in erratic pulses. One of them thrust a tablet at me. A color photo of Mase stared back.

I blanked my face while my thoughts rioted. Feozva’s hell, we had to get out of here.

“You need to tell me if you’ve seen him around here,” the man with the cracked eyes growled, but his voice didn’t sound human. The words scraped out of him like gears grinding over petrified bones.

My mouth pinched tight automatically at his order, and he seemed to zero in on it as if waiting for a lie to spill out. Or reading my body language to see if my actions matched my answer. I had a strange feeling he didn’t miss much. But I’d acted my way aboard the Vicious somewhat well, enough to convince a distracted crew I was a fourteen-year-old boy. I could get us out of this too.

I steeled my spine, examined the picture of the face I knew so well, then flicked my gaze up to meet his. “Never seen him.”

He gazed at me for several more heartbeats as if telepathically splitting open my skull to peer inside. Then he shoved past me with a hand as pale as his face.
Randolph stepped in as if from out of nowhere, his face unnaturally calm, and pointed at Mase’s picture. “Mind if I see that?” Without permission, he plucked the tablet with the picture away from the other man’s hands. “Oh, yeah, I’ve seen him.”

I ticked my gaze to Randolph and willed him to shut the fuck up. What the hell was he doing?
“He was standing over by the river bean stand about five minutes ago.” Randolph pointed vaguely behind him. “I noticed him because he needs a haircut. Bad. Said he was going to stock up on milk after he was done because he drank all of it. If you hurry, you can probably catch up to him.”

Somehow, he kept the venom out of his voice even though the ambiguous accusation was still there, even though now was not the time.

“Find him,” the cracked, pale man who had to be Parker said to his cronies.

The four of them swept past the fruit tent while Parker loomed over me as if he could hear all my truths behind my thrashing heartbeat.

“Until we meet again,” he said, his voice like a grinded threat.

Rusted balls. I nudged my foot forward and stepped on the back of Randolph’s heel.

He cleared his throat. “What I meant to say was good luck rounding that fellow up. I’m sure he deserves it.”

Parker eyed us both before stomping off.

“We’ll look forward to it?” I hissed.

About the Author
Lindsey R. Loucks is a USA Today bestselling author living in rural Kansas. When she's not discussing books with anyone who will listen, she's dreaming up her own stories. Eventually her brain gives out, and she'll play hide and seek with her cat, put herself in a chocolate-induced coma, or watch scary movies alone in the dark to re-energize.