Titan, similar to Earth but not. 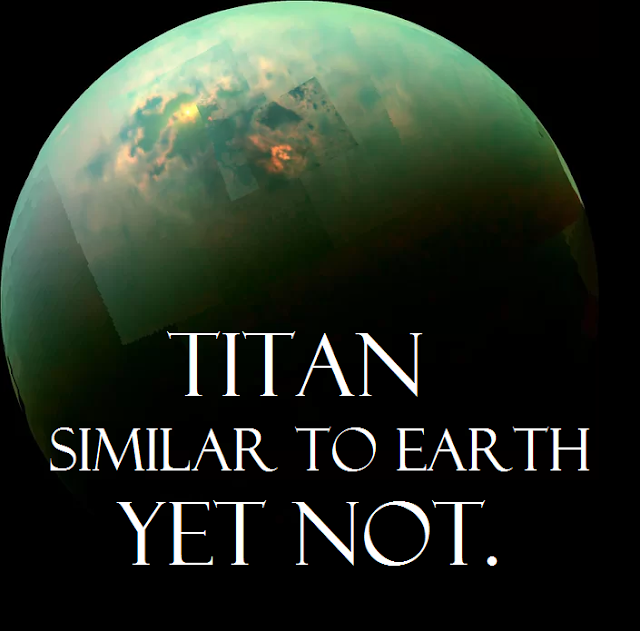 There is much about Titan we do not know.


Such as: How can Titan be older than Saturn?
It is possible that Titan did not begin its life in our galaxy. Instead, it might have been snagged as it passed through.

Liza adds:  Or, perhaps it was purposely sent so the workers on the ship Pan could have a pleasant place to visit on their time off.
or
Perhaps a superior alien planet sent Jupiter and Titan here when they discovered valuable, hard to find materials in Saturn's outer ring.

Seriously, Pan  does looks far more like an 18 mile long ship mining the rings than a planet. The symetrical indented markings on its top dome are a dead give away. 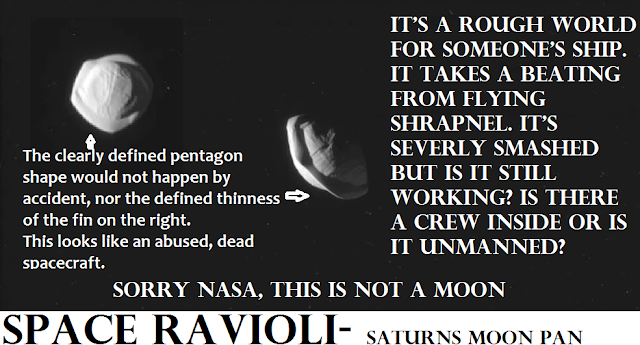 As crazy as it being a spaceship mining Saturn's ring might be, it's more sensible than declaring it is a planet that accidentally made identical indentations on the oval top and smooth, slender, pentagonal fins around the oval 'rock'. The chances of that happening has to be close to zero. 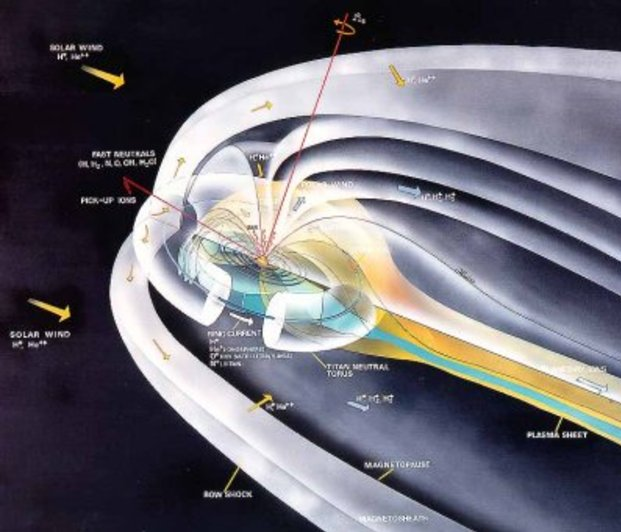 But let's stay focused on Titan. 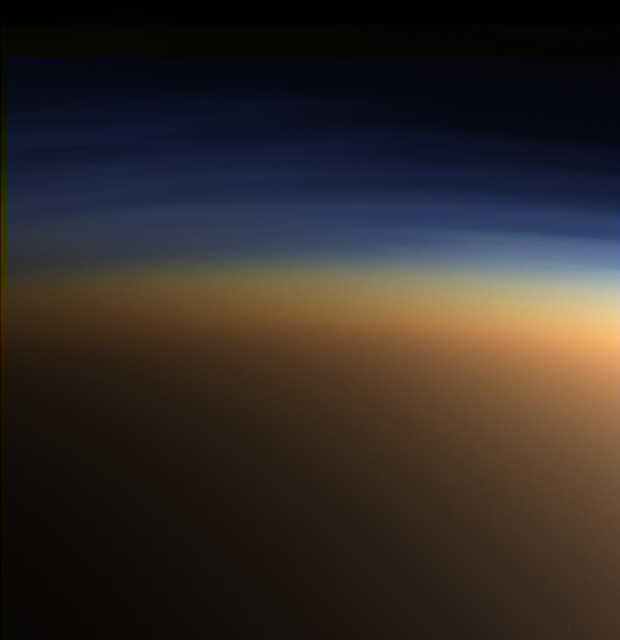 It has a huge atmosphere. Now that's partly because gravity is only 14% of earth's, so it doesn't pull at the little particles in the sky as hard as earth does. But this atmosphere is huge compare to Earth's.

Liza's thoughts: perhaps the reason is more subtle. Perhaps there is already life on Titan and it really doesn't want company. so organic substances are intentionally injected in the atmosphere to hide their world at the two poles. 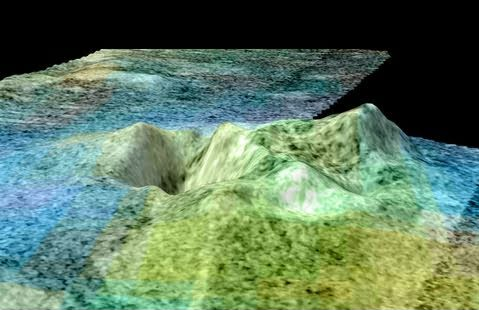 Here's a strange thing: It appears one of the layers of inner Titan is made of water and ammonia (that's what we call Anti-freeze).
Scientists think that because the 'land' appears to move over time.  They even suspect Cyrovolcanic activity that spews out water and ammonia, which they call dirty water (don't drink it!)
And be warned. If you touched the lava, your hand would freeze rather than burn.

Some scientists believe, but have yet to prove that the inside of Titan is liquid and 'warm'.

The reason they believe there is a liquid layer under the shell:
Titan changes shape as it orbits Saturn.
Cassini was able to measure Titan's tidal bulge and determined it rises and falls on the order of 30 feet. If Titan were completely solid inside, the tides could not be that large.

If the liquid causing the 30 ft bulge is actually ammonia and water (Anti-freeze) then we still need another generator of heat, since Ammonia will freeze at -148F and the surface temp is -183. The tidal pull itself creates some heat, but the scientists insist it's not enough to account for 30-foot change.

There is also the possibility that the surface of Titan, is floating on an Anti-freeze layer.

Another oddity:  The vortexes on each pole appear to be hurricane winds, yet the water beneath is very calm, causing some scientist to conclude the winds are soft at ground level, given their analysis indicated the waves were only a centimeter tall.

I find that to be a ridiculous conclusion. I believe that most of the lakes are frozen or have a rubbery like covering. For I fail to see how both poles could have hurricane force upper winds, and on the surface there is basically no wind.

Liza notes: In my story I'm having the winds at ground level to be much lower, but there are winds and they do worry about them.

And here's a mystery: Methane should have disappeared long ago, but it's still there. So something on the planet is creating methane. Perhaps volcanoes, or biological substances (that could include farting and dying life forms).

And the next oddity: While Titan appears older than Saturn, it's surface appears to be very young, which means it might still have volcanic activity. If so, the scientists are still predicting it would spew Anti-freeze.

A last oddity: The Dunes in the center of the planet appear to be backwards to the winds (compared to how dunes on earth are shaped). They suspect Titan dunes are not fully shaped by winds, but electrostatic charges shapes the dunes on Titan. It is possible the dunes are highly electrical and might be lethal to walk on. 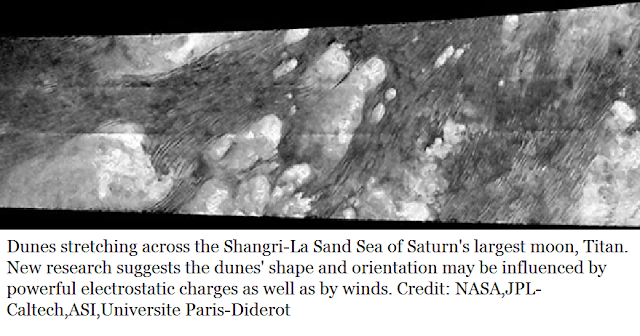 Below is someone far more scientific, but even he leaves out a few things

Liza is an imaginative author, don't complain about her conclusions.
Posted by Liza O'Connor at 12:00 AM