Cyborg romances have become a favorite of mine, so I decided I would like to write one. While I have used some of the usual cyborg tropes, I worked hard to make the story my own.

Back in Book One of the Aledan Series, I had created a post-apocalyptic Earth of the future where Hankura went back to find his psi-mate. A colonial survey company from Earth went to New Procyon to see if it would be profitable to finance mining colony there. Only the Mesaarkans got there first, so the survey team killed them to protect their interests. But, one got away.
The Mesaarkans took revenge on Earth and dozens of colonies by destroying every major city on the planet.

Without enough natural humans to fight the interstellar war that lasted over one hundred years, they started making cyborgs to fight it. Genetically engineered human embryos were grown in nurturing tanks, injected with nanocybots and bioelectric computers in their brains. Their growth accelerated for them to emerge full-grown within five years.

Enter cyborg VKD-08463. After his first mission in the Prequel, his human side realizes the cyborgs have been made to perform humanity’s most nefarious work by killing other beings. VKD-08463 likens himself to the ancient Viking warriors and names himself Vyken Dark.

After 80 years of war, killing Mesaarkans, the war is over, and Federation Admiral Gregor who is Vyken’s friend and mentor is dying. As his last wish, he asks Vyken to go back to Earth to help rebuild civilization in Chicago USA. The Admiral has always known there was more to Vyken Dark than a killing machine. He believes that in helping to build an enclave to help the people struggling to survive that Vyken can make a life for himself. 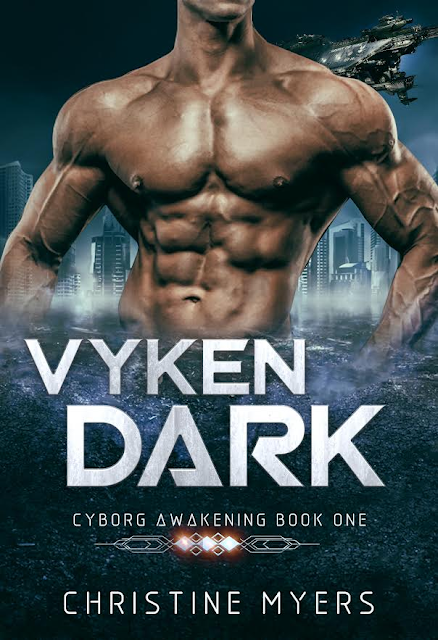 Here is a snippet from Vyken Dark:

“Thank you for helping us,” Danya said, looking up into his eyes. She was a little over medium height, but Vyken was still head and shoulders taller.

They both knew what would have happened had he not been there. They might both be dead, and they probably would have raped Danya before they killed her.

The thought made Vyken clench his jaw and wish he had killed them for the human waste of resources they were. On the other hand, females were valuable to replenish their race. It was against their code to harm women who were not involved in armed combat against them.

“It wasn’t a fair fight,” Vyken said. He stepped closer and reached out to stroke her cheek with his fingertips. He searched his memory bank for an appropriate thing to say. He had no experience flirting or courting a woman. “I am attracted to you.”

“That’s certainly straight to the point,” she smiled at him faintly. “You’re not very good at this, are you?”
“No. My experience with women is limited to my service with them during my training and the war. I know how to give sexual pleasure…”

“I just bet you do,” she chuckled.

“But I never learned the courtship process,” he admitted.

Danya gave him a full smile. The big cyborg was gorgeous---handsome face with a square jaw, piercing blue eyes, cropped blond hair and ripped muscular body. Danya could easily imagine pleasure in his arms once she got to know him a little better. She felt her core come to life for the first time in a long time.

“Well, these days, I don’t know as people bother with that anymore,” she said. She put her hand over his as his fingertips rested against her cheek. “I think the attraction is mutual, but I think we have to know each other before we get to the sexing, Vyken.”
She took his hand and held it in both of hers. “Helping my dad and me out of that jam, sure earned you some serious consideration.”

Momentarily, Kydel emerged from the treatment room. Danya let go of Vyken’s hand and turned to the medic.  “Is he going to be okay?”

“He will,” Kydel stated. “He will sleep now for a few hours while the nanites do their work. In the meantime, Vyken will take you to the mess to get some food. Your father said you were looking for food when you were attacked.”

“Food would be great,” she said, “A bath and clean clothes would be nirvana.”

“We’ll get your food first, and then we can probably find clothing in the storeroom to fit you like we are wearing,” Vyken said. He was wearing khaki green cargo pants and a black t-shirt under a khaki green jacket. “We used to have women serving on the ship’s crew, but they have all passed on or were killed in battle.”

“Pants and a shirt will do me just fine,” she said.
“Come, I’ll take you to the mess.  Our selection is limited, but the meal bars are nutritious.”

Vyken led the way, and Danya fell into step beside him. They emerged from sickbay into the light gray metal corridor. He measured his stride, so she didn’t have to strain to keep up with him, sensing she was weakened by malnourishment. The door to the mess hall opened automatically when they approached, and Vyken showed Danya to the hand cleaning station by the entrance. He took her to a table away from the others then went to the dispenser and got two meal bars for her and one for himself.

“The normal serving is one, but you look like you could use an extra one,” he said handing her two of them as he sat down at the table across from her.
Despite her hunger, Danya opened the first one carefully and took a bite, chewing it slowly. It was lightly sweetened peanut butter flavored and tasted delicious to her. Hungry as she was, she ate slowly, chewing each bite carefully.

“Mmm!” she murmured. “I haven’t eaten in a couple days. This tastes delicious.”

The other women were sitting at a table with their children eating meal bars with the cyborg called Jolt. Danya looked at them but didn’t recognize them. They didn’t seem much older than her twenty-five years. For that matter, Vyken didn’t appear much older than she, but Danya guessed he must be. Cyborgs didn’t seem to age at the rate regular people did. All of them were later models, and they could have been as old as seventy-five years.

That was the word on the street, perhaps more legend than fact. The cyborgs definitely were impressive. Danya was hard pressed to stop herself from drinking him in with her eyes. Vyken did not seem at all self-conscious under her keen observation. He knew he was a superior being in looks and ability as a warrior and as a man. He liked the appreciation that gleamed in her eyes.

“Is there water or something to drink?”

“We have plain water and flavors lightly sweetened.”

Vyken got up and went to the water dispenser and filled two recyclable glasses with cold water then brought them back to the table placing one in front of Danya and one at his place at the table.  He noticed the bruises on her arms from where the thug’s fingers had pressed into her flesh. It made him angry. Mine!
He felt like ripping that worthless piece of humanity apart with his bare hands. Even more, he wished to lick the marks on her arm so his nanites could repair the damage that caused the bruises.

“If you don’t mind,” Danya said, “I will save the other one for later. If I eat them both, I might not keep them down.”

“If that’s what you want. We have an ample supply of food for many years to come. You can have more anytime you wish,” he told her. “We have space for three hundred people on this ship. I want you and your father to stay here with us. You’ll be safe here.”
“And convenient for you…” Danya quirked an eyebrow as she looked at him speculatively.
“And for you to know me better, Danya. You and your father will be safe here,” he said. “We are here to recruit people to rebuild a civilized society and suppress the gangs of thugs that prey on females and males not skilled in fighting.”

“You want me, but then what?” she asked boldly meeting his gaze.

“You are mine,” he said with complete certainty. “It’s genetic. You are my female.”

“It’s something your body releases to attract your mate. I sensed yours and reacted to them,” he explained.
Even then he could smell her arousal, but she seemed to be fighting it.

“What if I don’t want to mate with you?”

“You do. Your body is telling us both that you do,” he said softly.

Danya’s face grew hot, and her cheeks turned pink. Her nipples were hard, and her pussy contracted as she sat looking at him. “Well, don’t hold your breath. I don’t just bang every guy that saves my life and my father’s.”

Vyken took that as a ‘no,’ but he could wait. It would take time to gather the people to set up the Enclave in the old cyborg facility. The female would not be part of it; she would understand eventually. Bonding with her would take time.

“And I don’t wish to ‘bang’ just any female.” He gave her a faint smile and took a sip of water. “You are the only female I want. I would agree to bond with you before breeding.”

“You’re pretty sure of yourself, aren’t you?” she teased, and her eyes sparkled with humor.

Vyken was only sure that she would be his mate and that she wanted him. He just didn’t know how long she would resist her desire for him.

“If you have finished eating, we can go to the storeroom and get you fresh clothing,” he said, rising from his seat.

“Yeah, okay.” She got up, and they left the mess hall together. He led her down the hall to a lift and took it down four levels to the cargo bay. It was located adjacent to the storeroom and the landing bay.

Check out tweets for CM
Twitter.com/Crisanne1