Leaving Earth and traveling through space to an unknown planet is not an easy choice to make. However, Earth can no longer support the mass of humans it holds. Except for a few protected enclaves, the human race is starving and society has fallen into the hard truth of KILL OR BE KILLED.

Knowing this day would come, the shamans have a ship ready to leave.
They now only await for their prophecy to occur. 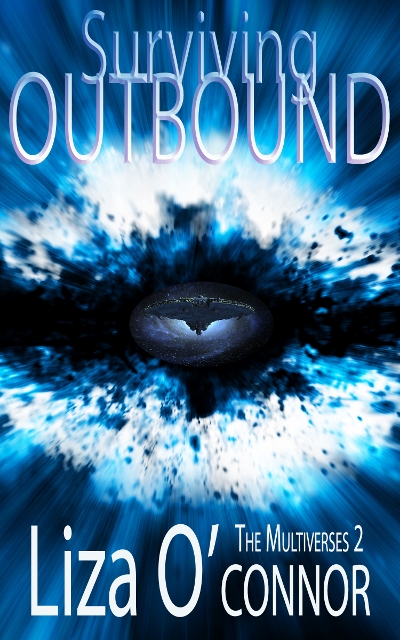 Surviving Outbound
By
Liza O’Connor
Blurb
With the prodding of her dead soul-bond’s spirit, Saran and their giant blue bull leave their farm in search of a handler so Blue can escape Earth and travel outbound. The man Saran meets and falls in love with is her dead soul-bond’s husband, and their spiritual joining sets into play a prophecy written three hundred thousand years before.

Together, they become Tamsarandem, the most powerful soul-bond in all the multiverses. The shamans pay for their voyage to Terranue, a planet never before colonized. In return, they only ask Tamsarandem to look after the other colonists and help them to prosper and find their Paths of Light.

Failing to stop Tamsarandem from leaving Earth, those who walk the Path of Darkness embed their own people on the ship to ensure it will never arrive at Terranue. In case that fails, they send their darkest lord disguised as an innocent to ensure the death of all who follow the Light. To be certain of success, long ago, they seeded an evil within Terranue that can devour everything on the planet. Finally, they will strike a fatal blow that darkens the Path of Light through all the multiverses.

The Gods must step back and let matters run their natural course, for they are running out of authorized interventions. However, the God Pane, with the help of the sentient ship computer Marybell, keep searching for clever workarounds to ensure The Path of Light will reign supreme upon the final collapse. But there is only so much they can do within their bureaucratic rules.

Excerpt
Shaman Daniel, who sat to the Seer’s right, spoke urgently to their leader, his request loud enough to be heard by all. “Allow me to bring in someone with more experience.”

The Seer placed his hand on Daniel’s arm. “We wouldn’t even know of The Soul-Bond of Three if not for Shaman Troy. He alone found the Cave of Light and mastered the lost language of Gaelic. He then discovered the passages that foretold of The Soul-Bond of Three. Do you truly believe a boy so young could have achieved such a feat without the help of the Gods?

“Your Imminence, I do not deny the boy has accomplished much, but perhaps he has done all that he was meant to do. Perhaps now, it is time for our scholars to take over.”

Shamans around the table nodded in agreement.
Shaman Troy bowed his head in shame. He had failed everyone.

The Seer of Light shook his head. “I have never forbidden any of you to search caves for lost tablets, from learning the archaic languages of the past, or from discovering hidden clues in sacred texts. By all means, assist in this critical matter if you will. But Shaman Troy will continue the path he set upon twenty years ago when he was a mere child of twelve. And I have faith the Gods will deliver The Soul-Bond of Three to Shaman Troy when the time comes.”

About Author
Liza is a multiple genre author of 40+ novels.
After ten years of doing nothing but writing novels, she is now attempting to publish 11 books a year in various genres: Contemporary, Historical, Western, Sci-Fi, Paranormal and crossovers between one genre to another. Fearless and determined, she strives to find books you will love.
Liza’s favorites books in her library are:
A Late Victorian Series, The Adventures of Xavier & Vic, plus a spinoff, A Right to Love. This is an ongoing series with book 9 coming out soon.
A Long Road to Love is a humorous Contemporary Disaster Romance series of five books.
There are many more books she adores as well
Check below if you are intrigued...
Social Networks
FOR MORE INFORMATION ABOUT
LIZA O'CONNOR
Investigate these sites:
Liza’s Multiverse Blog
Liza's Blog and Website   Facebook   Twitter
Check out all 40+ of my books in various genres.