Today, I want to talk about the meat in my chili.
(That is not what this blog is about at all)

The common chicken. If we went to visit them in their unnaturally crowded natural environment, we might not ever eat chickens again, but we'd survive the visit.

This was not always the case.

We've known ten foot tall chickens once terrorized the island of Madagascar  because THEY STILL EXISTED IN THE 17th century.

We don't know for certain why they went extinct, but here's my assumption:

A pirate leaves the ship to gather fruit, comes upon a chicken almost twice his height and the size of an elephant. 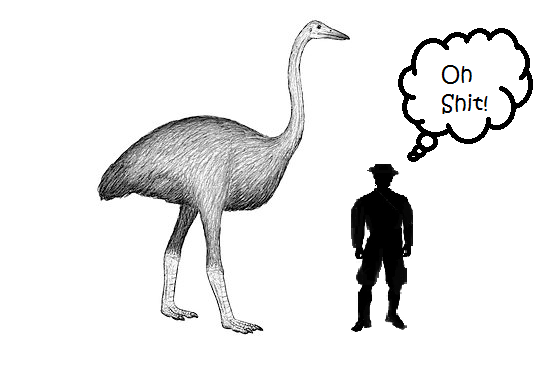 Fully aware that chickens are mean with a proneness to peck, he draws his blunderbuss and shoots the creature. Then hurries back to report chickens the size of elephants.

Naturally, the other pirates laughed at him, but everyone stopped laughing when he led them to the dead chicken and found two more chickens pecking at it's remains.  Every man in the group pulls his weapon and fired at the monsters.

Hearing the extended gun shots, the pirate captain puts the ship on alert and goes out with his most trusted men and comes upon a mass of food beyond his wildest imagination.

"I want a fire pit built at once, and get these birds plucked, gutted and roasted. We are going to eat well on this trip."

"What if there's more of them?" The first pirate asked.

"Leave the smaller one, and douse it with poison. That should keep them at bay. And no more wasting ammunition. Let's find out exactly where the heart is located."

A few days later, the captain & his men sailed off with a shipload of smoked chicken which they traded (along with tales) to other pirates during their travel. And soon, Madagascar was the McDonalds of the sea and a favorite of the pirates.

(Chicken is real, pirates really did consider Madagascar a pirate stronghold in the 17th century, but the story with dialog is made up by silly Liza)

But how did a giant flightless bird get on an island to begin with. It surely couldn't wade across the water.

Here's my non-verified explanation:
Madagascar is a BIG island just off Africa. It looks to have once been part of Africa and wandered off during shifts in the plates.
Just shift it down and to the left and it will be next to Zimbabwe, which isn't a terribly friendly place, so I don't blame it for running away.

So that's how they got on the island and lived so much longer than the chickens that were on the mainland.

That's right, Liza is claiming the giant chickens roamed the mainland. Here's why.

According to Scientific America a new find in bird bones has occurred.

An 11.5 foot tall, 500 lb, Chica-raptor. Okay, I just made the name 'Chica-raptor' up. But the rest is true to the article. It's actual name is Anzu Wyliei, which evidently means "Chicken from Hell".  That is so much more mature and scientifically well behaved than Chica-raptor.

They've evidently reconstructed it from the 66 million old bones of three specimens. It has the head of a chicken,

the body and claws of a raptor

and the crest of a Cassowary.

I know what you're thinking. What's a Cassowary? I had to look it up. 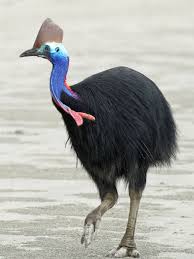 And here is what they believe the combination looked like:

The response of a human remains unchanged.

The Chica-raptor is calling back to it's family, "Suppertime!"

Here's the skeletal frame they created from the 3 sets of bones which were found in North and South Dakota. That's right! This one is Made In America:

It looks so dainty and harmless, and possibly trying out for American Idol.

If we had wild giant chickens running about America, then I must presume the critters were everywhere. However most of them died before humans showed up. Most, but not all.

Liza puts on her sceptic hat


Now this is me stepping back and being a skeptic:
First, let me concede giant chickens existed. I believe the Madagascar Elephant chicken, it's two species and 7 genres did exist until humans killed them either for food, sport, or the simple fact no one in their right mind wants to live around a ten foot chicken.

But I've gone to too many museums to admire the skeletons of fabulous dinosaurs that turned out to be plastic molds created to go around the three real vertebrae bones they'd dug up.

What I'm saying is that paleontologists are a bit like authors. They fill in the blanks with their imagination, being as credible as they can. But at the end of the day, much of what they present is no more than educated speculation, similar to the story I provided above as to how the elephant chicken came to live on the big island and why it eventually became extinct. The fact that it survived until the 17th century is a credit to the native people of Madagascar. They were clearly brave people, willing to accept the giant creatures that roamed on their new home. (But it might also explain why they were always traveling off searching for other islands to inhabit. Theirs had giant chickens on it.)

Later immigrants, proved to be less respectful to the many strange creatures of Madagascar. To be specific, it wasn't until the island became a stronghold for PIRATES that the birds died out.

Pirates-Why can't we make them extinct?

So allow me to summarize matters:
1) Madagascar ran away from Africa, and took some giant chickens with it. (It took some other weird things too)

2) It did not take any humans. They showed up close to CE when they sailed to the island, created tribes, and lived with 10 foot chickens.

3) Then the damn pirates made the island a strong hold and killed all the chickens.

4) Now we've discovered more giant chickens in North and South Dakota. I've no idea what killed them, but given they seemed to have bred with raptors, these things definitely needed to be wiped out.

5) The discovery of chickens in America, leads me to conclude giant chickens lived all over the continents but humans weren't having it. The chicken could either shrink to a foot tall or become extinct. Many wisely chose to shrink.

And now, they are held in overcrowded captivity and slaughtered at will. (Bet they are regretting the whole shrinking thing.)

Now, if you'd like to read the less funny, but more detailed speculation in the Scientific America article, click here.
Posted by Liza O'Connor at 12:00 AM