I've got Carol Van Natta over today with a spaced out bargain of a book.
For this week only
(so don't dawdle and stare at Nebulas all day)
Overload Flux,
A Central Galactic Concordance Novel is
99 Cents
So what's it about, you ask... 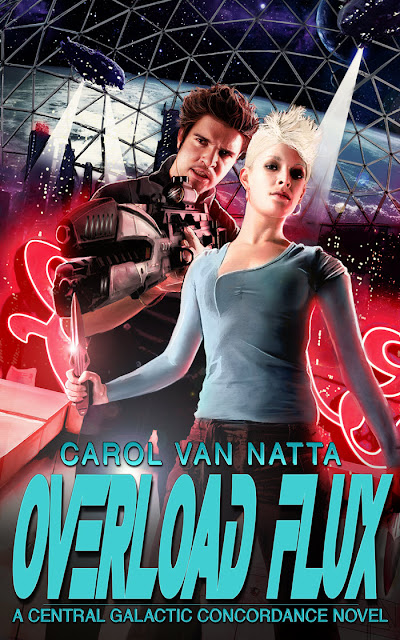 Stability has reigned for throughout the Central Galactic Concordance for two hundred years, but trouble is brewing. A new pandemic is affecting hundreds of civilized planets, and someone is stealing the vaccine...

Brilliant crime scene investigator Luka Foxe has a problem. His hidden mental talent is out of control, making him barely able to function in the aftermath of violence, and the body count is rising. The convoluted trail leads to a corrupt pharma industry and the possibility of an illegal planet-sized laboratory. Faced with increasing threats, Luka must rely on an enigmatic, lethal woman he just met, but she has enough secrets to drag a ship down from orbit.

Mairwen Morganthur hides extraordinary skills under the guise of a dull night-shift guard. The last thing she wants is to provide personal security for a hot-shot investigator, or to be plunged into a murky case involving deaths, murderous mercenaries, sabotage, treachery, and the military covert operations division that would love to discover she’s still alive.

Two more lives in a rising death count won’t bother their enemies one bit. Their only hope for survival lies in revealing their dark secrets and, much harder, learning to trust one another.

* Planet: Rekoria * GDAT 3237.026 *
Their footsteps echoed in an empty corridor of Rekoria’s planetary spaceport. Mairwen caught herself touching the outside of her coat pocket that held the wirekey, and ruthlessly controlled herself to keep her uneasiness at bay. Though neither man she accompanied down the tall, wide corridor had said so, she had the feeling they didn’t want to be discovered doing whatever it was they were about to do.

Motion-sensor lighting triggered as they approached each segment. At ninety-four minutes before midnight, the noisy passenger area of the spaceport had been as busy as ever, but the commercial shipping section where they now walked was deserted. Trending galactic headlines and bright vids flashed silently on the continuous overhead displays along the corridors, creating constantly changing lights and shadows. It could have been worse; in the passenger section, the animated displays took up entire walls.

She walked two paces behind the two men, like any average, incurious security guard, and kept her expression blank. Her company uniform and long topcoat passed as conservative corporate wear at a casual glance. As long as no one noticed her heavy boots, she wasn’t likely to draw unwanted attention to their group.

Personal security detail wasn’t her usual assignment. While she did usually work nights, it was mostly as a solo guard or security systems monitor at large industrial complexes in marginal sections of town. This was supposed to be her night off.

She hoped the only reason she’d been chosen for tonight’s activities was because she was a name on a La Plata Security Division “night-shift available” list of dozens, and not because she’d stood out in some way. She’d been careful to stay unremarkable. This was the first time in months she’d allowed herself to open her extraordinary senses even a little, noting and cataloging the distant sounds of automation and the stale scents of people. She shouldn’t be doing it now, but the increasing tension of the two men she was accompanying was contagious.

The older man, Velasco, about her height, was entertained by the flashy wall displays in a variety of languages, and softly repeated the words that caught his attention. He again switched the padded strap of the large forensic kit he was carrying to his other shoulder. Lukasz Foxe, taller than Velasco by a dozen centimeters, stood straighter and carried two bags slung over his right shoulder, a smaller hardcase and a larger curved bag, and had a winter greatcoat over his left arm. He was leaner and clearly in better shape than Velasco. So far, Foxe hadn’t said much.

When she’d received her orders from dispatch to check out a company vehicle, pick up the wirekey and a forensic kit for Foxe from the office, then pick up Velasco from a restaurant and take him to the spaceport—she had assumed she would then remain with the company vehicle while Velasco did… whatever it was he was here to do. Instead, for reasons unknown to her, Velasco had told her to come with him to collect Foxe from the gate of an incoming interstellar ship. The need for her presence certainly wasn’t for her company or conversation, because once they’d entered the brightly lit spaceport, Velasco had all but ignored her. She was relieved. From what she remembered from meeting him once at a company event, he had nothing worth saying.

She’d never met Foxe before tonight. Dispatch’s orders had included his company photo, which didn’t do him justice. Even though he was obviously tired, he was handsome, with light brown skin and wide, angular cheekbones, and wore his casual business clothes with more style than Velasco’s ultra-trendy but unflattering suit.
She was already familiar with Lukasz Foxe’s name. She’d memorized most of the Investigation Division’s investigator names and titles so she’d know whom to avoid. She didn’t want the possible attention that came from being in the orbit of a blue-hot company star. She didn’t know what a High Court-certified forensic reconstruction specialist did, but she had the feeling she was about to find out.

She hadn’t quite figured out what Velasco’s role was. From something he’d said in the first burst of jabbering he’d subjected her to as she drove him to the spaceport, he was with the Security Division of La Plata, but assigned to Investigation. She’d mostly tuned him out for the rest of the trip, choosing instead to focus on traffic, which wasn’t well automated, especially at night. Etonver city drivers were allowed to disable vehicle autopilots, and mostly did, making for bad ground traffic, twenty-five hours a day.

The spaceport corridor split, and they turned toward the section with commercial interior warehouses. When they rounded a corner to the left, Velasco pointed halfway down the hall to a large cargo bay door of opaque flexglass. The logo said “Centaurus Transport” in huge letters. A smaller, human-sized door farther down to the left had the same logo. The two men stopped in front of the bay entryway, and Foxe looked to Velasco.

“Anything from the Port Police?”

One of the benefits of working for a security company was official access codes for police bands. Foxe’s first order after arriving had been to tell Velasco to monitor the frequency from his percomp. It had been Mairwen’s first clue they were expecting trouble.

Velasco activated the company-issued percomp he wore strapped to his wrist. It was a more recent model than hers; night shift tended to get refurbished leftovers. Tech Division had been nagging her to surrender her clunky hardware for an update.

“Nothing,” Velasco said after a moment. Mairwen got the impression he hadn’t been paying attention to it until asked. Fortunately, his assessment was accurate. Even though she hadn’t been ordered to do so, she’d been monitoring the same frequency via live audio sent to the earwire adhered to her jawline, and had heard only two routine communications in the last eleven minutes.

Mairwen was becoming increasingly resentful at being kept off the net as far as what she was being dragged into. She had no idea why investigators from her company were going to the warehouse office or what they expected to find, other than something that would need a forensic kit. Meaning it was more than a simple slice by interstellar jackers or some ground-based theft crew. But she couldn’t ask without drawing unwanted attention to herself, so she stayed quiet. It was one of the few times she’d ever wished she was a telepath. Most telepaths she’d ever met were under the thumb of the Citizen Protection Service, and she knew the steep price of that all too well. 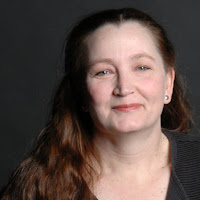 Carol Van Natta is an independent author and playwright. Her novels include Overload Flux and Minder Rising, the first two books in a new science fiction romance series, and Hooray for Holopticon, a retro science fiction comedy.

She shares her Fort Collins, CO home with a mad scientist and various cats. Any violations of the laws of physics in her books is the fault of the cats, not the mad scientist.