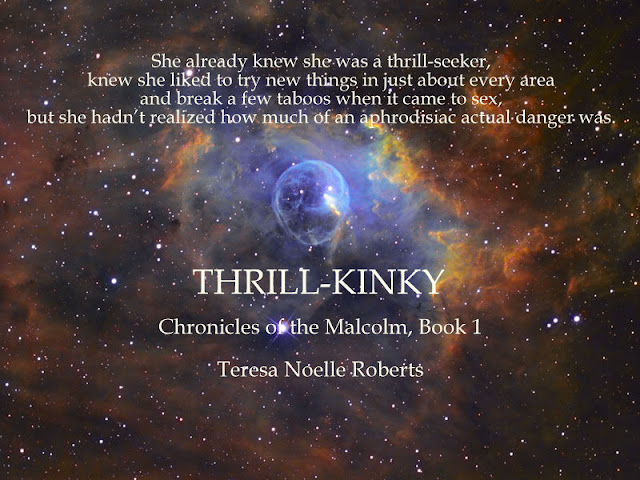 Being a writer means that the pressing questions of my work day are often peculiar. Today, for instance, finds me wondering what high-tech or biotech support systems may be available for a 26th century person who’s trying to shake a drinking problem. For plot reasons, my hero is going to embrace the old-school method of drying out with a little help from his friends. But for plot reasons, there has to be an easier, less painful—and far more expensive—solution that’s just out of his reach. I suppose they could have developed non-addictive booze in another 500 years, but that solution’s off the table because I just thought of it and I established his drinking problem in a previous book.

Then there’s the little issue of why one of the hero’s enemies also has it in for the sorta-cyborg woman of his dreams, but that huge question has a simple solution. It all has to do with fallout from biotech-related crimes backed by a particular planetary government. Sure, I need to work out all the details—but how they’ll deal with addiction in five centuries is more puzzling at the moment.

Far more interesting questions than the ones I used to face in my work day, such as, “Why does this vendor call 8 million times a day when I keep telling her I’m not even the right contact?” It’s so much more interesting being a writer! Plus, I can do it with a cat in my lap.

As you can probably guess, I’m working on a science fiction romance. Book 3 of a series, in fact. The series is the Chronicles of the Malcolm, the adventures of a space-freighter crew who get caught up in interplanetary espionage and find themselves dodging assassins, changing whole worlds, and finding true love in the process. Book 1, Thrill-Kinky, came out in May. Book 2, Bad Kitty, releases in September. And Book 3…well, so far it’s about one chapter on my computer, but I’m already having fun with all the what-ifs.

Now if you’ll excuse me, I have to figure out how biotech and nanotech might intersect hellishly in the person of an innocent woman who’s about to become the target of some very nasty aliens.

Do you have a clever idea about how addictions might be treated in the future? Make a suggestion in the comments and you might win a copy of Thrill-Kinky. A winner will be chosen randomly after 6/15/15. Thrill-Kinky
Chronicles of the Malcolm, Book 1

Sexual freefall is like a game of chicken, except the first one to let go wins.
Humans may have expanded to the stars, but they still have the annoying need to work for a living. Which is why Rita, crew member of the space freighter Malcolm, is stuck collecting recyclable slag rather than attending her favorite festival celebrating love and sexuality.
Things go from boring to interesting when she discovers a badly injured man who’s been thrown into a recycling bin to die. The catch, he’s gorgeous, winged, and naked.
Drax Jalricki, reformed (mostly) art thief and reluctant covert operative, is on an undercover mission to protect three planets when someone in his own government brands him a traitor. By virtue of association, Rita and her crew are going down with him.
From their first, hide-in-plain-sight quickie, the erotic spark between Rita and Drax is fueled by danger and adrenaline. But their growing suspicion that there’s more to their connection than lust may not matter if they don’t live through the night.
Warning: Hero and heroine who straddle the line of criminal behavior—and definitely violate public indecency statutes. Exhibitionist, dangerous sex. Dark, sordid pasts. Wild risk-taking. Giggly cat-girl sidekick who’s not just another pretty…tail. And the greatest risk of all: true love.

As Rita positioned the antigrav at the next recycling bin, she thought she heard banging and rattling coming from inside.
A trapped animal? While moving bins, she’d already startled a gulba, a number of ratlike leetas, a couple of stray cats and some animals she couldn’t identify, but must be pets, since they had collars. If an animal were stuck inside, she’d try to find some way to get it out.
Rita used the antigrav to raise the bin’s heavy lid, then carefully moved the floater over so she could peer inside. Sympathy for animals or not, she’d rather keep a safe distance from a startled, potentially irate thing with teeth and claws.
At first, what she was seeing didn’t make sense: rust, amber and saffron-colored feathers, tipped with black, and a swath of something green and purple that might have been festival draperies.
A gigantic bird?
But there weren’t any birds on San’bal, according to what she’d been able to learn on the Galaxinet, and she hadn’t seen anyone on her previous visit. If there had been birds, Xia would have chased and probably caught them, even if they’d been as big as this appeared to be.
A discarded costume with an animal underneath it? Part of last night’s festivities had involved the locals all running around in fabulous costumes, drinking copious quantities of the green bubbly booze.
Some costumed person who’d enjoyed way too much of green bubbly and had climbed into a recycling bin to sleep it off? It didn’t seem like a desirable location for that, but maybe his equally drunk friends tossed him in as a joke.
While she was still trying to sort it out, the lump of feathers moved.
Rolled over.
Opened his eyes.
Stars and moons! Not a bird, not a costumed drunk—a Banjali.
Maybe she should have thought of that sooner, but you hardly ever saw Banjalis off Banjal. Their glorious wings were only fully functional on low-gravity planets, and anything approaching Old Earth norm, like San’bal, was uncomfortable.
“Hey, are you all right?” Rita asked, hoping he could understand her. “Need a hand getting out?” The gravity was probably too high for him to fly easily, especially if he was hung over.
The Banjali stirred, giving her a better view.
Definitely male. Definitely gorgeous. And definitely naked. Xia’s tail would have started twitching at first sight.
The pleasure of that view, however, was spoiled by the strips of purple and green synthsilk—they could have been torn from the buntings that draped anything in the city that didn’t move fast enough—gagging him and binding his ankles and wrists.
And by his injuries.
The poor man looked like he’d had a run-in with an Arcturian bearcat. His golden skin was a mass of bruises, scrapes and shallow cuts, one eye swollen shut. But Arcturian bearcats didn’t use laserpistols, and she was pretty damn sure the wound in his shoulder was a pistol shot. No one injury seemed life-threatening—and Rita, thanks to Buck’s twitchy temper and Gan and Mik’s noble but dangerous hobby, not to mention their propensity for taking jobs first and asking questions later, had seen a few life-threatening injuries in her time—but he had to be in a world of pain. All the banging she’d heard must have been him flapping and thrashing while trying to roll over. That must have been some kind of fun with a laserpistol wound in his shoulder.
“Hang on, buddy,” she said. “I’ll get you out of there.”
With luck, she wouldn’t hurt him more in the process. The antigrav wasn’t meant for moving living things, and while she didn’t see any obviously dangerous wounds, he might have internal damage.

Teresa Noelle Roberts started writing stories in kindergarten and she hasn’t stopped yet. A prolific author of short erotica, she’s also a published poet and fantasy writer—but hot paranormals and BDSM-spiced contemporaries were her favorites until she realized science-fiction romances offered new possibilities for outrageous adventure, wild sex and love that overcomes serious obstacles, including being from different species! Find her at www.teresanoelleroberts.com, on Facebook at https://www.facebook.com/AuthorTeresaNoelleRoberts, or on Twitter, where she hangs out as @TeresNoeRoberts.

Do you have a clever idea about how addictions might be treated in the future? Make a suggestion in the comments and you might win a copy of Thrill-Kinky. A winner will be chosen randomly after 6/15/15.
Posted by Liza O'Connor at 12:00 AM