Cara Bristol shares her Mated With The Cyborg

Today, I have the fabulous Cara Bristol and her book Mated with the Cyborg.
In addition, one winner of the rafflecopter will win a $10 GC. 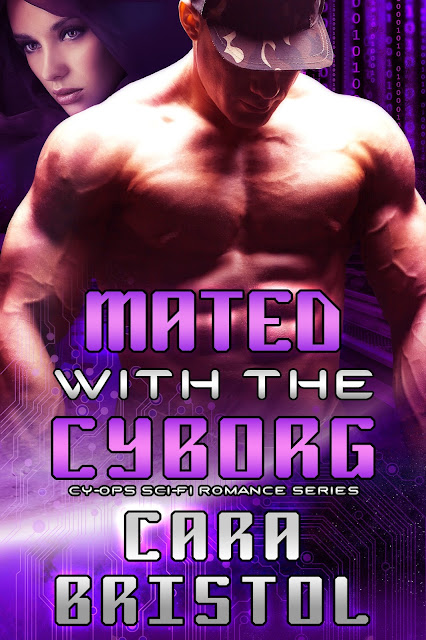 Kai Andros’s orders were simple. Get in. Gather the intel on the terrorist organization. Get out.

Then he met her. Mariska. Beautiful. Innocent. Ignorant of her father’s atrocities. And marked for death.

His orders said nothing about saving her. But he did. He went off-mission.

Can a rogue cyborg outrun both Cyber Operations and the terrorists to save the woman he loves?

Her father pushed back his chair and patted Janai’s head before rounding on Mariska.

She attempted to rise, but her feet tangled in her skirt. R981’s arm shot out as if to keep her from stumbling.

“What are you doing?” Obido glared at the android.

“I am performing my duty and assisting her,” he replied.

“Your duty is to report to me.” Her father confirmed what she’d suspected.

“She was about to fall.”

It sounded like R981 was arguing. The general must have thought too also, because his eyes narrowed on the android, but then he jerked his attention back to her. “Remove your scarf.”

No one had seen her face since she was a child teased to tears by her siblings. It had been a relief to be ordered to wear the veil to spare the sensibilities of others and escape their horrified looks. While bathing, she avoided the reflection glass and its taunting reminder of her ugliness. Stomach clenching into a hard knot, she released the opaque fabric from one side of her headdress.

Mariska held her head high and stared straight ahead.

HOLY HELL! KAI Andros almost fell over.  This was what Lamis-Odg considered deformed, ugly? Fortunately, his black contact lenses concealed most of his shock.  Intel intercepted by Cyber Operations had reported the fifth daughter of one of the most infamous terrorists had a “significant facial defect.” Her eight sisters had been married—mated was the term these people  used—but no one wanted her, fearing she would produce hideous offspring.

He hadn’t seen her face until now.

In the genetic game of chance, Mariska had been dealt a royal flush. She was fucking gorgeous.

Don’t gawk! A real android wouldn’t react, but as a cyborg, a red-blooded heterosexual man working undercover as a robot, how could he not?