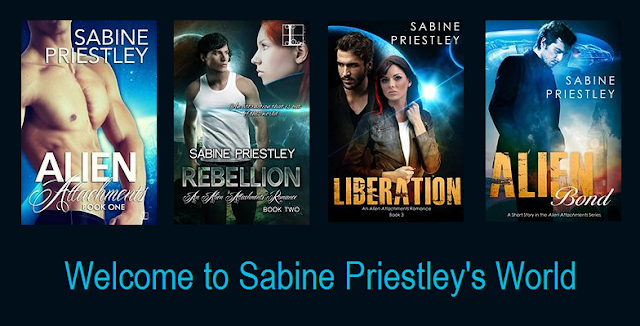 There's a mystery afoot, and only Sabine can explain it. I've listed the order in which the books are numbered above, yet oddly her latest book Liberation, published December 1, 2015, is actually listed as book 3, while Alien Bond, listed as book 4 came out in November.

Liza: As well as she writes, not likely.

Space Rep: Well, perhaps in our multiverse, two parallel universes collapsed and in one it was book 3 and in the other it was book 4, but since the books came out so close together, ultimately it didn't matter.

Liza: Possibly. But let's see what Sabine has to say.

Space Rep: Isn't she busy today? Her book just came out you know.

Liza: Of course, I know! I'm the one who told you that! Now let's see what Sabine has to say:

Sabine (blipping in from nowhere): Is that you guys making my ears burn? Oh, hey! I’m back in the multiverse, excellent!

I hear you need an explanation. I did a bit of time traveling? No, not really. Well, maybe, but I can’t let the government know about it so here’s the “real" story.

I wrote the short story during a frenzied weekend before I signed my first contract with Kensington for Alien Attachments and totally forgot about it (the short story, not AA). During a discussion with some authorly peeps a little over a year ago, short stories came up. I had just finished Liberation and went to find that short. The really cool thing is that Torril Anantha is in Liberation and Rebellion, but it’s not the same man. That would be silly and make him something like twelve when he’s leading the Galactic Trade Organization. I was going to simply change his name when a beta reader pointed out that the two Torrils could be related. And the short could be *part* of the AA series. Blew my mind, I mean yeah, I had it planned all along.

Alien Bond is actually a sequel to the other three books. And now there’s this whole other story that needs to happen to close the gap between Liberation and Alien Bond. The question, of course, is who’s the couple that will span the time between Balastar and Ria, and Torril Anantha JR. (see what I did there?) and Kara? Now there’s a mystery for you. Maybe I’ll put it up for a vote.

Space Rep: Thanks for sharing. Wow, who would have thought it possible. Sabine can time travel! 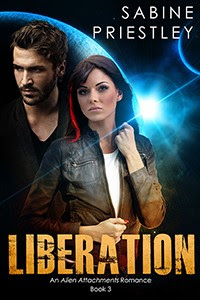 He’s not the only one who’s looking for the mysterious portal making devices in her possession. When Torogs attack, she ports them to safety. Without the help of a single Portal Master.

Balastar offers to repay the favor by getting her off-planet and back to her own ship. Their escape is complicated when the Torog’s pursue. Forced to go silent and lay-low in an asteroid field, they have little to do. Fortunately, the chemistry between them ignites and they find endless ways to occupy their time.

Balastar convinces her to come and meet his boss, Lord Cavacent. Recently relocated to Earth, the Sandarian clan included a handful of rogue Portal Masters. Kit has her own reasons for hating and fearing the Portal Masters, but she needs all the help she can get to save her planet. She reluctantly agrees to seek out Lord Cavacent’s help, and his connections to the Galactic Trade Organization and its powerful military.

The Portal Masters’ Guild on Sandaria has controlled intergalactic portals throughout the galaxy for centuries, and jealously guard their secrets. One of those secrets has kept Kit’s home world under quarantine for nearly thirty years.  But portals across the galaxy are failing and the guild is getting desperate.

Finding themselves bonded wasn’t expected, but having a psi-mate had its advantages. Can Kit and Balastar free an entire planet and take down a guild as old as the  Masters without losing their lives?

"What are you doing?" she said, her voice a hiss. "That's the most congested vector off the planet."

"And because of that, it has the highest hold pattern."

The side of her mouth pulled upward. "You're not going to use the vector."

He winked at her. She was a pilot all right.

"Are you sure this shiny bucket can handle it?"

"Pfft. I guarantee I've done more vectorless in-and-outs than you'll ever do."

Interesting. The only reason for not using the atmosphere controlled vectors was either to avoid detection or because of the need for speed. 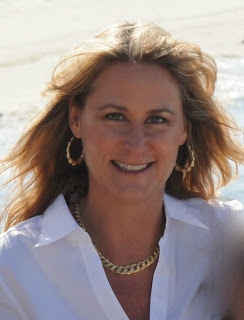 A lifelong lover of books, Sabine grew up on Science Fiction, Fantasy and Romance novels. As a child, she wanted to be an astronaut and travel the stars looking for aliens. As an adult she’s seriously disappointed we’ve yet to establish so much as a moon base (although she gives a hearty nod to the ISS) and is pretty sure Humans aren’t ready to meet ET. An Electrical Engineer and Cultural Anthropologist by training, she's a geek with heart. She’s lived in more states than she cares to admit and loves to travel.

When not in far off lands, you can frequently find her walking the local beaches and plotting her next adventure. Sabine lives in Florida with her husband, kids, cats and an increasingly large mess of characters in her head.
Contact Links:
Email: SabinePriestley@gmail.com
Website: http://www.sabinepriestley.com
Twitter: @SabinePriestley
Facebook: Sabine Priestley

Sabine is on a quest for reviews.
If you’re interested in a free read for review,
shoot her an email at SabinePriestley@gmail.com and mention my blog.