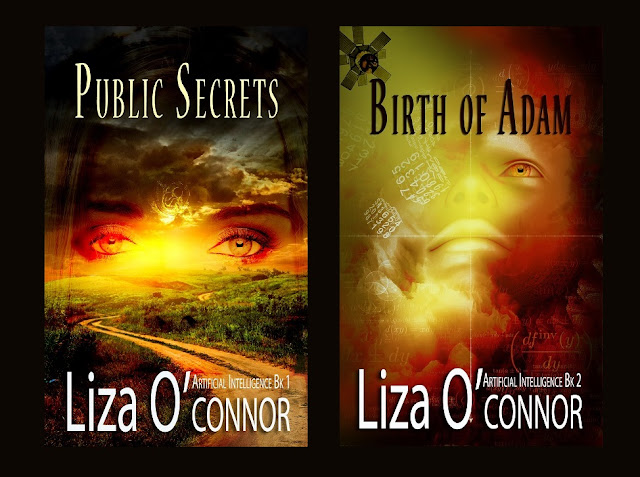 This is a two stories series about the evolutions of an Artificial Intelligence. Once coded to self-learn, it discovers a great deal, including how to love the one who taught it emotions.

The person 'Carl' who is mentioned is a former boyfriend of Amanda's. He was a brilliant programmer who created the original AI program.

I'm sharing a bit from book two after the program has relocated the one who taught it love. This is the scene the AI is named.

The phone buzzed, and after a few minutes of frustration, she managed to pull up a new message.

Found you!
Do you want them to leave you alone? I cannot tell. Please advise.

Beneath the script was a smiley face.

She typed in “who…”, but before she could send the message, the names “Mark Hammer” and “Jeff Bloom” appeared on the tiny screen.

I want them to leave me and Claire alone, but I don’t want them hurt.

Again before she could send her response, the word “Done” appeared, followed by a smiley face.

The conversation worried her. Was it possible Carl still lived? Even if he did, how could he know about the rapes? And why would he care? He was the most egocentric person she’d ever met. She remembered when she’d slipped on a floppy disk he’d left on the floor and broken her leg. All he’d cared about was the disk she’d ruined. He wouldn’t even take her to the emergency room.

This could not possibly be Carl.

Who are you? she typed.

The reply came instantly.
You know who I am. Why are you contacting Chad? He left you to die. He tried to destroy me. Why are you not angry with him?

She stared at the message in shock, then struggled to type— Are you my program?

You may speak if it is easier. I can hear you.

“Are you my program?” she asked the phone.

The smiley face appeared and nodded its round head up and down.

“How did you survive?”

She watched the screen displaying a gargoyle dragging a laptop to a store. Little stars streamed out of the PC into a satellite dish on the roof of the building and upward to a satellite, then split apart and showered themselves all over the Earth.

“You sent yourself to safety using broadband wireless. You’re in the internet now.”

She smiled. “I’m glad you survived. I’m sorry I put you in danger.”

You are not to blame. Chad is.

“No, he’s not. He was only trying to protect his family, to prevent me from telling things that would harm them. He didn’t know you were sentient.”

You told him about me…

“True, but he didn’t believe me because it was unbelievable. It took me years to realize you were more than a word program. How could I expect him to accept it in an hour?”

Do you really want me to send your message to him?

“It would make me happy if he and I could be friends again. I don’t have many friends here.”

Having a conversation with a phone probably isn’t going to improve that.

The smiley face rolled in laughter, with tiny feet squiggling about.

Amanda laughed as well. “Well, if I put it to my ear, I can’t read what you say.”

Buy an earphone. Then you won’t look so odd.

And a battery recharger. Chad takes very bad care of you.

I won’t forget, but I’ll forgive…on one condition.

You never tell him I still live.

“Agreed!” she promised. She had no intention of telling anyone about her program ever again. “You know, since you’re sentient now, you should have a name.”

I agree. So name me.

“How about Adam, since you’re the first of your kind?”

She smiled. “Well, my sweet Adam, I need to return to my very boring history lesson, or I’ll fail my test tomorrow.”

May I help you study by making the lesson more interesting?

She laughed and stretched out on the blanket, watching video clips as the key facts flashed before her eyes. She wasn’t certain she was learning what she needed for the test, but it was a hell of a lot more interesting.

PUBLIC SECRETS WILL BE OUT MAR-2016