Hi, I’m Pippa Jay, author of scifi and the supernatural with a romantic soul. I’ve just released book two of my scifi romance series - Redemption - and the main theme of the book is alien invasion. As a SF devotee I’ve read a lot of books and seen a lot of films and TV series that feature our planet being invaded by pesky aliens. So I thought I’d share some reasons why we have nothing to fear if it happened for real.

• Technology. Aliens always think their high tech gadgetry is more powerful than anything us backward little humans have. But as Independence Day proved, a simple computer virus whipped up on an Apple Macintosh Powerbook 5300 can whoop alien ass better than any advanced alien technology you care to mention.

• Human beings. We’re stubborn, aggressive, breed like rabbits, and we’re full of nasty little germs to which no alien is immune! Ask the tripod aliens in the original War of the Worlds if you don’t believe me. Wiped out by germs—how humiliating is that?! Never mind nuclear weapons—just sneeze on 'em!

• Doctor Who. Yes! No matter what invades planet Earth, the sonic screwdriver wielding, ‘never carries weapons’ Time Lord (er, let’s ignore the sword-swinging, ‘no second chances’ #10 and the gun-toting #9) will always save us!

• Numbers mean nothing. Hell, you’re intelligent enough to cross the galaxy in your vast hordes, but that means nada to humans! Yep, no matter how many of you there are and how many of us you kill, someone will always figure out your weakness, whether it be yodeling which makes your super-intelligent brains explode à la Mars Attacks or the silicon in shampoo that makes the giant alien, super-speedy evolving amoeba in Evolution go boom.

• Planet Earth. Okay, if like the aliens in Signs you happen to be vulnerable to water, then Earth is probably the most idiotic place to invade. Bearing in mind the planet is 70% water, and humans themselves are 60% water. Seriously, did NO ONE spot the flaw in that idea?! Or if you happen to have eyes sensitive to sunlight like the gecko-related invaders in Battleship so you can’t see the humans approaching in daylight. Sheesh. 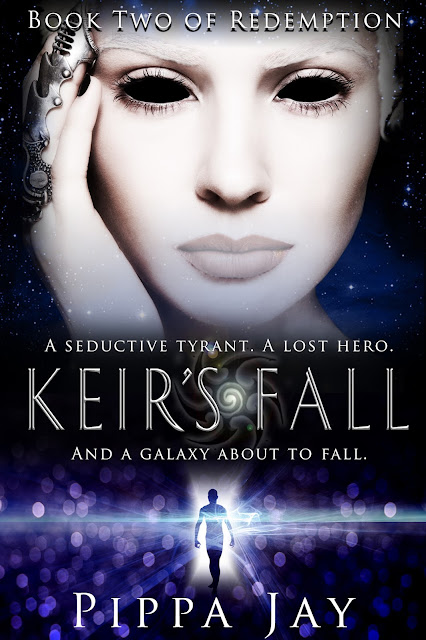 
A seductive tyrant. A lost hero. And a galaxy about to fall...

It’s been a year in paradise for Keir and Quin, but now the idyll is over. After Quin falls sick, they return to the hidden sanctuary of Lyagnius, and what she learns there will not only change their lives, but set them on a journey that could separate them forever.

When Keir falls victim to a ruthless Nercaandi Empress bent on conquering the galaxy with her cybernetic army, it will take all Quin’s diminishing powers and the help of her son to find him. But what waits for her aboard the tyrant’s ship will test her strength and the limits of their love, and put everything she cares about at risk. Including Keir.

With the galaxy itself about to fall, will she be able to save him?

Review  of Keir’s Fall by Pippa Jay
This is a rather dark, very intense, well written story. I had hoped book two would be lighter, but that didn’t happen. In fact, at times I wasn’t certain anyone was going to survive this book.

The villain was well conceived. How she took control of her army and continued to expand her power was totally credible.

Our hero, Keir, and heroine, Quin, have a great many problems/new revelations to deal with in this story, which impacts them on a survival, emotional, and family level. All are handled very well

There is a false ending where things start to wrap up nicely and then bam! All hell breaks loose. That took me by surprise, and I’m sure it breaks some writing rules about arcs, but I actually liked it once I got through it. During this section, I admit, I was begging Pippa to stop torturing the nice people. I became terrified she’d had a terrible row with her hubby and was going to kill all the good people.  Matters were very bleak indeed, but she must have heard my pleas, because she turned matters nicely so we could end with no one presently dying or being tortured.

However, I’m pretty sure there are more books in the making and more torture for Quin and Keir. Since the books tend to be addictive, I’ll probably read them as well.

Book Two of the Redemption series and part of the Travellers Universe.

Please add it to your Goodreads shelf HERE, or sign up HERE for my no-spam newsletter for special previews on cover reveals, new releases, the latest giveaways and discounts, and upcoming news. Or click Follow on my Amazon author page.

Book One - Keir - is available from online retailers in print and all digital formats http://www.pippajay.co.uk/#!keir/c187d

After spending twelve years working as an Analytical Chemist in a Metals and Minerals laboratory, Pippa Jay is now a stay-at-home mum who writes scifi and the supernatural. Somewhere along the way a touch of romance crept into her work and refused to leave. In between torturing her plethora of characters, she spends the odd free moment playing guitar very badly, punishing herself with freestyle street dance, and studying the Dark Side of the Force. Although happily settled in the historical town of Colchester in the UK with her husband of 22 years and three little monsters, she continues to roam the rest of the Universe in her head.

Pippa Jay is a dedicated member of the Science Fiction Romance Brigade, blogging at Spacefreighters Lounge, Adventures in Scifi, and Romancing the Genres. Her works include YA and adult stories crossing a multitude of subgenres from scifi to the paranormal, often with romance, and she’s one of eight authors included in a science fiction romance anthology—Tales from the SFR Brigade. She’s also a double SFR Galaxy Award winner, been a finalist in the Heart of Denver RWA Aspen Gold Contest (3rd place), the 2015 EPIC eBook awards, the 2015 RWA LERA Rebecca (2nd place), and the GCC RWA Silken Sands Star Awards (2nd place).


DID YOU MISS
ANY OF THE TRANSMISSION?

LIZA O'CONNOR'S AI, ADAM, HAS HIS SAY.
http://multiuniversesoflizao.blogspot.com/2016/01/liza-joins-human-vs-aliens-nanites-etc.html
Posted by Liza O'Connor at 12:00 AM