Shadows of the Highridge by Jay Swanson

I also asked him a question. Let's see how well he answered it:

Is there a real location that reminds you of the land in your story?

You can’t help but feel death’s pull when standing on the banks of the Congo River. I grew up near the Pacific Ocean, I’ve sailed across the equator twice and around the Cape of Good Hope once; I’ve never seen water so powerful.

The cataracts of the Congo River throw water higher than any pier or breaker in a storm. They crush boats. They kill people. When Stanley ‘discovered’ them he pulled his canoes from the water and spent months hacking through deadly jungle rather than face their fury. Almost everyone with him died anyways.

This is the world of natural violence and impossible odds that captivates the human mind. The kind of place where death looms raw, unveiled; the kind of place that must be conquered. The rusted barge lodged in the center of the river speaks to the folly of any such attempt – yet in we’re drawn nonetheless. We step up to the cliff to peer over its edge; we swim in the pools and jetties of the waterfall just to feel its tug. We test death’s limits, push its boundaries, and for no other reason than curiosity. We’re conquerors. It gives us a rush.

This was the world that spawned Into the Nanten and the exile of Marceles na Tetrarch. These are the very challenges he faces in a world so distant from ours, and yet not so different.

The Democratic Republic of the Congo is one of two countries in the world where the standard of living has steadily and significantly regressed for its citizens. It’s the country that gave us the word “Kleptocray” and whose misgovernance is the thing of legend.

When I lived next door, in Congo Brazzaville, the DRC was the kind of place hovering on the horizon that may as well have been separated by the very vacuum of space. There are nearly three times as many people living in Kinshasa, the capital, as there are in the entire country of Congo Brazzaville (the Republic of Congo). It’s a massive swath of land with a convoluted, violent, and utterly fascinating history written in blood and conquest. There is a reason it’s known as the heart of darkness.

Into the Nanten takes place in a jungle whose kingdom has regressed even farther into chaos. The fallen state of the Nanten Kingdom is divided, broken, and struggling to redefine itself in the midst of yet another darkness rising. At its heart, the Oaken Throne has been taken over by a mysterious prince, one who has risen on the dark tide of a cult whose very purpose is to undo the world.

It is into this very conflict that Marceles is cast, exiled for murder and unable to keep the Old Empire from casting him out. A man that he hates has tread the trails of the Nanten before him: Brin Salisir. Ahead of Marceles by 20 years, Salisir has left a trail of destruction in his wake, but every legend holds him dead and gone. Marceles would love to find him dead, just as much as he would love to dispel the rumors of this dark cult at the center of the Nanten.

Writing in his journal nearly every day, you can follow along with Marceles’ adventure as it unfolds on intothenanten.com. Each entry posts in real time – if he writes in the evening it posts that evening (EST), or the next morning it will post that morning. If he’s running for his life, you won’t hear from him for a few days.

We successfully Kickstarted a second season, and it’s been underway since September of 2015. You can listen to the audio version for free on SoundCloud (Season One) or day by day on iTunes (Season Two). Listen in on Marceles’ thoughts on Twitter @MTetrarch. Illustrated by Nimit Malavia, you can also follow along with the artwork on Instagram @mindofjayswanson and buy prints from the online store.

What the Congo lacks in monsters and cannibals, the Nanten provides in spades. And what you could once only read in history, you can now experience day by day. 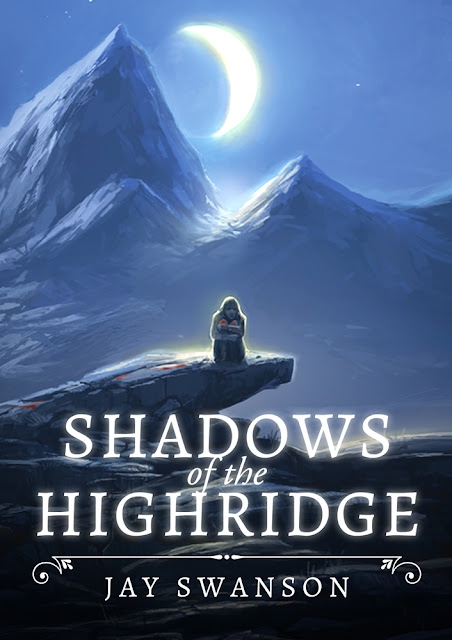 Shadows of the Highridge
by Jay Swanson


Moving along the soil is the quickest way to die; for Tolly to survive she must learn to stay silent. Life on farms like hers was difficult enough in the face of plague and a decade of drought, but something worse has come to the foothills under the Highridge Mountains. Something that will destroy everything she loves.

Mere miles away, Vanig’s search for water to revive his farm is cut short when soldiers arrive bearing dark news of disaster striking farms throughout the region – and they suspect he is the root cause of it all. Those suspicions spike when a disheveled warrior appears hundreds of miles from home and takes Vanig hostage.


Death looms in the shadows of the Highridge.

Tolly had never run so hard. The house was so far off. How could she make it?

The certainty grew within her: Time was short. Why was she so sure? She could feel the panic rise.

No, she thought. Bring them this way! But her lungs were already burning. She couldn’t yell any more. All she could do was run. Please, Nym, just listen.

“Little sister!” A Truan hand heard the commotion and came running from the other side of the house. “Little sister, stop! Kanda says it is not safe!”

Get out of my way, she wanted to yell. Run with me. But all of her air was spent on sprinting. The man was closing on her. She would have to dodge him somehow. She couldn’t let him stop her. He was ten feet away. Then the ground exploded beneath him.

Tolly fell, skidding to a halt as her skirts flew up around her. Scrapes burned along her thighs and up her backside. She heard screams behind her. The dust obscured her view. And then, through falling earth, she saw half of the Truan’s body thrown into the air by a tower of dirt.

No, not dirt, it was living. A snake. A worm. The monster was thicker than ten men standing together and jutted out of the ground twice as high. Three massive jawbones worked separately to hold the torso of the Truan in place. Whatever was happening within the mouth, Tolly didn’t want to see it. 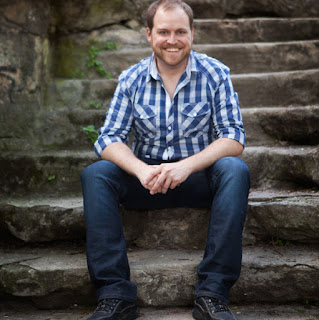 Jay Swanson is the creator of Into the Nanten, the world’s first real-time fantasy blog. He is also author of a spin-off novel, Shadows of the Highridge, the standalone short novel Dark Horse, and the Vitalis Chronicles trilogy. Jay grew up in Washington State, and has lived all over the world since then. Jay served for three years with Mercy Ships, a medical charity that runs the world’s largest private hospital ship, the Africa Mercy. In each country they visit, Mercy Ships donates free surgeries to the world’s forgotten poor, alleviating the suffering that so often accompanies a lack of access to medical care. He started in IT, then worked as the editor for their international Creative Pool, and finished as the on board Media Liason.

Paris will always have a place in Jay’s heart; he lived in France for two years, but he’s currently working in the US as a consultant on electronic medical records. Basically, he lives on planes.
Jay has a background in design and video production which have been instrumental in his self-publishing endeavors. Jay was telling stories from an early age, and latched on to video as soon as he discovered he could borrow people’s cameras. The stories that would one day become the Vitalis Chronicles began to take form in Jay’s head as movie ideas while he was still in college, and he began writing them down when he realized that they might make good books as well as films (and that if he died in Africa, there would be nothing left to prove they ever existed). He started writing White Shores in May of 2010 and finished on Christmas day of that year in Applesbosch, South Africa.


Don't forget to join the rafflecopter!