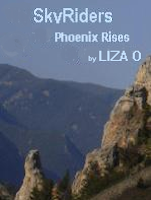 Here's an unedited
Excerpt 6:
For Logan, Alisha’s flying seemed surreal. The maneuvers she did with casual ease weren’t possible, or so he had been taught. Maybe that was the problem. The Corp training prevented fliers from reaching their full potential.

He didn’t want to believe it but, watching Alisha, he had to consider the possibility. Sure, she started with natural talent, but within a single month of self-training she had exceeded the skills of their best fliers. Hell, she’d exceeded what was thought possible.

Her abilities couldn’t be odder if she had arrived in a space craft claiming to be from a superior alien race. He only hoped the key differences resided in the modifications she’d made to wind-catcher and her slats. Those differences could be shared within the Corp. Pure flying ability wasn’t transferable.

Although just seeing a maneuver was possible might encourage their talented Ryders to stretch a bit more….or get them killed.