You gotta love superheroes, because they are the ultimate alpha. Draco Powers is everything a woman could want in a man except he's afraid the people he loves will get hurt or, worse, killed.

For a fun read, this turned out to be a rather deep novella for me. 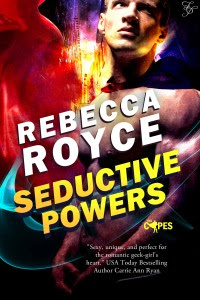 Blurb
Wendy Warner is a bit of an oddball. Raised in an orphanage, she’s found solace and friendship by watching the television show, Space Adventures, and participating in its fan clubs. Twice a month, Wendy comes to work dressed in a costume from the show that she wears to charity events. She’s been able to ignore the looks of distain from many of her coworkers, but when the president of the company gazes at her with something more, she knows she’s in deep.

Draco Powers rather likes the way the uniform hugs all her curves in the just the right places. He’s also a real-life Guardian who told the world that, yes, some people had superhuman abilities, but, no, they wouldn’t work for free or without health insurance. Some people refer to him with derision as the "Capitalist Guardian." While Draco doesn’t care what he’s called, he’s also being hunted by a group called the Organization, whose motives are unclear and yet still cause death and destruction wherever they go.

Rebecca Royce does a fabulous job creating a three-dimensional super hero with emotional fears. Yes, he can rip the paws off a giant robot cat, but can he safely make love to the woman he loves? And should he love anyone, given being with him makes them a target?

This poor superhero fears emotional ties, due to abandonment issues. (His father wanders about fathering immensely strong babies, then leaves the poor mom to raise them.) He also suffers from the realities of life. Just because he's superhero, capable of saving people no one else can, doesn't mean he doesn't need to put food on the table and receive health insurance just like normal people.

Just because you do something nice, doesn't mean you shouldn't get paid for it. But oddly, the world condemns him for asking for payment before saving people. This is all Superman's fault. He set unrealistic expectations.

However, that's just the tip of Draco's problems. When he realizes he loves his handler of four years, Wendy, he makes some good bonding progress. (No not the ropes and whip kind, but the emotional kind.) Yet when her life becomes threatened, he makes some terrible decisions, just like normal people do.

There's a ton of  life lessons in this story. Doesn't matter who you are, we all have emotional baggage we need to handle. Love is scary, but running away will not save you from pain. There is no protection from the longings of your heart. All you can do is hold on and cherish every moment of love.

I give this story a superhero 5 for Rebecca Royce's ability to take a worn out subject and breathe fresh and authentic air into it.