Today, I’m going to interview Jack the Zombie. You may already know him. Depends upon where you go for pizza.

I wish I had insisted on the pizza place, but nooo. I let Jack decide the location for the interview.

So I’m at the run-down offices of the Boston Zombie Support Group, in a well-worn office building.  Next door, there's a kettlebell group in session, and it sounds like a dropped bell could go right through the floor.

Jack Kershaw, part-time media relations guy for the BZSG, and full-time zombie, sets a cup of coffee in front of me.  I don't touch it.  Zombies like coffee so strong it's almost crunchy.

Jack: Great to see you again, Liza.  You said you had something to show me?

Liza: I do! I wanted you to see the new cover for your book. 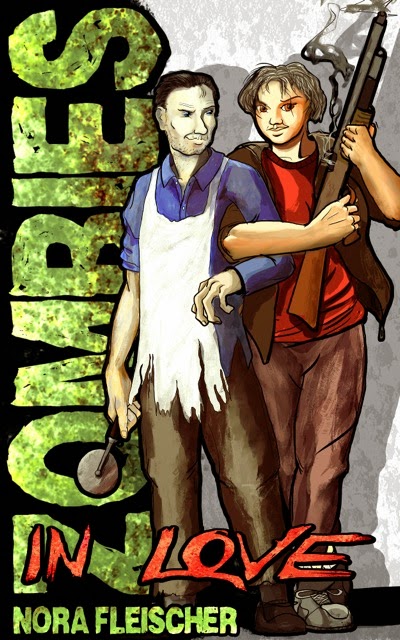 Zombies in Love.
By
Nora Fleischer

Jack: That's a great picture of my girlfriend.

Lisa.  I think it works.

Jack: You know, a lot of women can’t look that natural holding a shotgun.  [He smiles, reminiscing.]  She shot me with it once.

Jack:  Just a small misunderstanding.  These things happen.  [He squints, confused.]  Why does it say Zombies in Love on it?  Lisa's not a zombie.  And who's Nora Fleischer?  Is she the artist?

Liza: What are you? Brain dead?  Oh wait, that might be considered an insensitive question with a Zombie. Let me rephrase my question.
Have you forgotten Nora was with me the last time I interviewed you? She’s your author. The one who gave you life…well sort of.

Jack: Oh, you mean my biographer!  She's not the cover artist, is she?

Liza: Tweet him at @PhilippeMcNally, tell him how talented he is! I’m sure he’d love to hear from you.

Liza:  What do you think of the picture of you?

Jack:  Am I really that pasty?

Liza: I don’t really know. To be honest. You are the only zombie I’ve ever interviewed, and I’ve done so twice. Probably because you are very much the gentleman and have refrained from eating my brains, or gnawing on my leg.

Jack: Glad you appreciate that like humans, zombies aren’t all the same either.

Liza: Well, I try to be sensitive to all creatures, living and dead.

Zombies in Love: available at http://www.amazon.com/Zombies-Love-Nora-Fleischer-ebook/dp/B00NUA5CJQ

Jack Kershaw just wants to hold on to his new job at Lisa Alioto's pizza parlor, and to keep Lisa from finding out that he's a zombie. But Jack learns that he and Lisa are in serious danger. His second chance at life is the inadvertent result of a lab experiment by two graduate students, and Winthrop University-- a school which knows how to keep its secrets-- will do anything necessary to conceal that someone on campus raised the dead. With the help of Boston's zombie horde, can Jack and Lisa escape Winthrop's sinister clutches?

Nora Fleischer has a PhD from Winthrop University, and promises every word of this story is true. She lives in Minneapolis with her lovable husband Sven and children Wolfgang and Anastasia.  She’s on Twitter as @zombinanora.  Or you can talk to Jack at @bzsgjack, which might be more fun.