Can Mars Save us from deep freeze?

As I shared in Keplar DoneBroke blog, we’ve lost our ability to hunt for earth like planets to escape our coming deep freeze

Our sharp eyed Keplar is nearsighted now and can no long find us a better planet to occupy.

It was always a long shot anyway. To build a ship that could fly for 800 years to a new location seemed ‘iffy’ given all the problems we’d have to face:
Radiation,
Bone mass reduction,
Cabin Fever/People going bonkers in space,
Spacequakes

(Not making that up. Turns out they exist, only I don’t know a great deal about them. Evidently scientists discovered space quakes in 2012 when one hit Earth.  Do you recall anyone mentioning that? Because I sure don’t.) I'll deal with this at a later time.

Now back to the problems our ship might have: It could break down, miniscule particles could pierce the ships membrane, or small particles could create serious breaches in the hull. Hopefully, we’ll have some way to avoid the bigger stuff.

We won’t be able to send enough people in the ship to ensure human viability, since we tend to be a highly defective species. Nor do we have the space to put thousands of people into deep sleep.

However, we can probably store sperm and eggs from a variety of hopefully smart, sane people that didn’t get to come. Warranty stops after 10 Years for sperm and embryos, so we may have a critical problem here. Until we figure out how to live and prosper on big ships in space, we need to travel locally to Mars or Saturn's moon, Titan.

Oceans of methane have been verified on Titan by another of our Space robots. (Methane--Can we say heating source?) Good thing since Titan moon is really cold. -290 F anyone? But we might have a water shortage since it rains liquid Methane there.
Frozen and thirsty. Doesn't sound very good.

Scientist have recently evaluated the amount of radiation all those cute little robots like Curiosity  got on the journey over and how much they receive daily on the planet. The resulting analysis says a crew could survive the 180 day flight to Mars, a 500 day stay, and the 180 day return with just a 5% or so increase in getting cancer. 500 days is ample time to build something that could provide us protection from radiation, allow us to breathe air, and give us warmth. I'm thinking of some type of dome. We'll probably need to bring all the parts and assemble it there. But we'll need to bring everything required to build it.

Forget one nail and we are screwed.
There will be no stopping by the Home Depot for an extra lug nut.

I know, there’s a common belief that Home Depots are everywhere, and yes, they did build one on Mars due to marketing research that said it would be our future suburb planet. But that never panned out and there was one other small problem which required them to close the store. 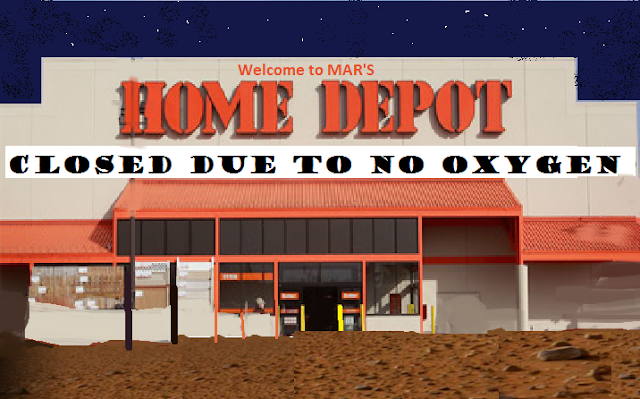 So how are our Martians going to LIVE for 860 days?

Maybe we should work harder at saving Earth...

Well, this is a bit worrisome. Historically, the deep freeze has plummeted quickly. We could be frozen popcycles in 28 years…so NASA's planned launch may be just a tad lad to the party. 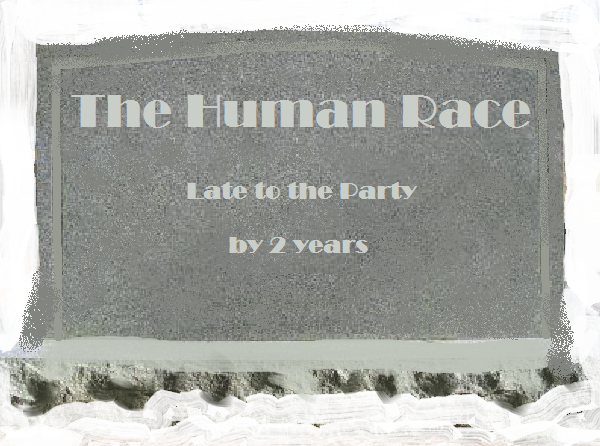 So here’s my advice.
Live each day as if it’s your last.
Enjoy Life to the fullest.
Be kind to others, generous, and loving.
That way if you die
(and for most of us, it’s a question of when, not if)
Then you will die feeling good about yourself.

And if you are still alive come thirty years from now,
You will be a better person for all your years of niceness and when they get around to sending peeps to Mars some of your sperm or eggs may get to go.

I know I promised a solution, but the more I delved into the matter, the less probable it seemed.

Perhaps NASA is further ahead than we know. Maybe it's just me being kept in the dark.

It's possible they are going to bag the whole defective human thing entirely and send AI robots to populate Mars and Titan.

I mean look at Curiosity: 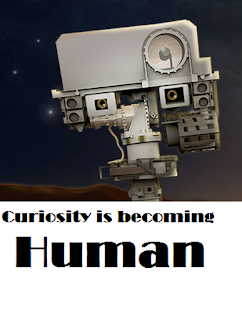 He appears to have a fashionable hat, two eyes, a long roundish nose, a mustache, and thin lips with a narrow chin.
He's discovering emotions. Using all his cameras, he made this picture of himself.  Notice how he is the center of his world? Curiosity has discovered the emotion of vanity. 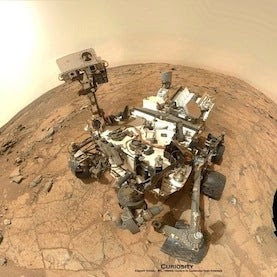 Could Curiosity be our future 'human'? I wonder if a million years from now Curiosity will be considered the primitive creature from which true humans evolved. The carbon based species buried under 27 miles of ice coating the pretty white planet with a thick methane & CO2 atmosphere.

And Curiosity 2000 will return when the planet thaws and name it EARTH.  The descendants of Curiosity will arrive and study the strange carbon based creatures discovered deep within the thawing ice and name them dodo mammals.

BREAKING NEWS Europe has launched 2 telescopes to planet hunt in the Milky Way. While I doubt they plan to save any Americans if they find a viable planet to run off to, the human race will still survive.

Oh, who are we kidding. Curious robots will be all that's left, wandering around Mars.
Posted by Liza O'Connor at 12:00 AM

Email ThisBlogThis!Share to TwitterShare to FacebookShare to Pinterest
Labels: We are doomed. Curiosity is vain.