I'm headed off in search of sexy Santas like the ones Jessica Subject finds. These aren't homegrown HoHoHos, these are aliens. And while I'm gone, Jessica is going to discuss various types of aliens that won't and will make a sexy Santa. She's an expert, so pay attention!

Aliens – Sexy or Scary?
Thank you very much, Liza, for hosting me the day before Christmas.

Hey, Santa is yet another story I wrote about sexy aliens, and the first in a series of sexy alien holiday stories. But for me there have always been the two types of extraterrestrials, those who want to help, and those who want to harm. Obviously the people of our planet will be more receptive to aliens if they are similar to us, humanoid. We can relate to them, understand how they work. And these are the aliens I include in my stories.

But there are several other types of aliens included in fiction that scare the bejezzes out of me. And, of course, they’re usually portrayed as some completely foreign looking creature that could be robotic, tentacled, insect-like, or something else our minds can’t even imagine.

Here are some of the movies with the scariest aliens I’ve seen portrayed:
1. Signs – I have never had a movie scare me so much. I don’t think it helped that I lived in a house surrounded by corn fields at the time.

2. Fire In The Sky – Okay, maybe this one scared me just as much as Signs. Maybe even more.

4. Dreamcatcher – Based on a book by Stephen King, I couldn’t even finish the book let alone watch all of the movie.

5. War of the Worlds – This movie didn’t scare me as much, but the thought of this type of aliens coming to Earth... Don’t want to think about it.

I know there are several more that are much more scary, but I don’t like to watch those movies. LOL
Instead of worrying about these creatures visiting Earth, I like to think about the sexy ones. Here are some of the aliens I find sexy in movies:

1. Superman - #1 of all time.
2. Spock – Pointy ears and all, I love Zachary Quinto as Spock
3. Hancock – Okay, I have a thing for Will Smith whether he plays a human or an alien.
4. Hans Solo – Who can resist a bad boy?
5. Jake Sully in his Avatar body
So, tell me, do you think aliens are scary or sexy? What aliens from movies are most memorable for you? 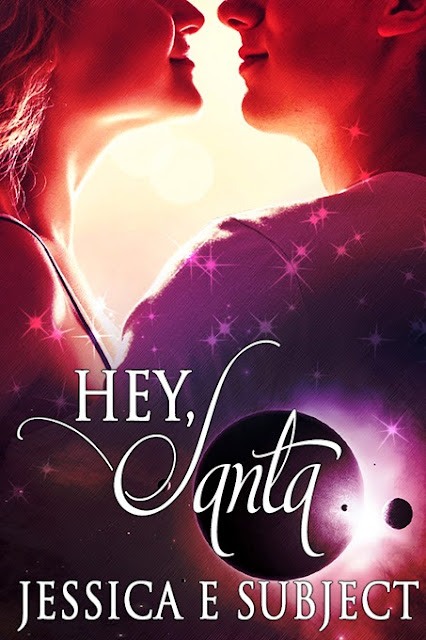 Available From:
Amazon (US/Canada/UK) | All Romance | B&N | iTunes | more
Excerpt:
“Please, Claire.” Tiffany rubbed her arm. “Will you ask him already? I saw him before he changed into the suit. He’s hot. And he has to be patient since he works with kids. If this doesn’t work, I’ll never get on your case again.”

“Fine,” she grumbled. A bad date has to be better than sitting at home by myself. “This is the last time. No more double dates or trying to set me up with a guy in any way.”

After sealing the promise, Claire patted the puffy skin under her eyes. “Is my makeup running?”

“No, you look beautiful, as always.” Grabbing her shoulders, her friend spun her around. “Now, go get him before he’s swarmed by a bunch of kids. And hopefully, soon he’ll fill your stocking with all kinds of Christmas cheer.”

Her cheeks warmed. She wanted more than a night of fucking, though that wouldn’t hurt, either. But Santa? Really? What was she supposed to say? Hey, Santa, I saw you bending over, and I think you have a nice ass. Want to go out sometime?

Andreas blinked, trying to wrap his head around what the sexy woman in front of him had just asked. He’d stared at her miles of long legs showed off by black tights, and her full, glossy lips, but he never expected her to leave her friend and come over, let alone ask him on a date. The only women who ever approached him were already married and concerned about the results of their child’s picture with Santa Claus. Or, the single moms who thought he’d make a great baby daddy. Um, no.

She doesn’t want a lot for Christmas…

Claire Otton dreads spending another holiday alone. When her best friend convinces her to approach the sexy mall Santa, she takes the chance and asks him out, hoping for so much more.

He’s waiting under the mistletoe…

Although Andreas Castellanos blends in on Earth, he knows he will never belong. But when the gorgeous woman he’d been staring at invites him to dinner, he has a hard time saying no.

All they’re asking for…

Can these two lonely souls find magic together or will their secrets steal their chance of a happy Christmas?


Bio:
Jessica Subject is the author of contemporary and science fiction romance, ranging from sweet to erotica. In her stories, you could meet clones, or a sexy alien or two. You may even be transported to another planet for a romantic rendezvous.
When Jessica isn't reading, writing, or doing dreaded housework, she likes to get out and walk. Fast. But she just may slow down if there is a waterfall nearby.
Jessica lives in Ontario, Canada with her husband and two energetic children. And she loves to hear from her readers. You can find her at jessicasubject.com and on twitter @jsubject.
Website/Blog | Newsletter | Twitter | Facebook | Pinterest | Goodreads | Amazon | Authorgraph